Why I am learning Scots Gaelic in Glasgow 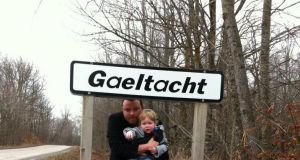 Despite having a decent level of Irish from a gaelscoil primary school, I never really thought too much about the language’s future until I first moved to Scotland in my mid-20s. Queen’s Street train station in Glasgow has a bilingual sign in English and Scots Gaelic, which reads “Fàilte gu Sràid na Banrighinn”, and I thought “Woah, the spelling is a bit different, and the fadas go the wrong way, but I can totally read that sign”. It was one of the first times I ever felt knowing Irish could be useful outside school.

This sparked an interest in Scottish Gaelic. Given my Irish background, I hoped I could pick it up fairly easily.

Then I saw just how badly Scots Gaelic was faring over here. Less than 1 per cent of the population of Scotland speak it. It’s much maligned in the media. The general population is apathetic to it at best and outright hostile to it at worst. Most of them don’t see the language as “theirs” in the way we do. There are some valid historic reasons for this, but regardless, many a proud tartan-wearing, bagpipe-liking Scot, even those with a Gaelic surname, think of it as a pointless dead language.

To my mind, if we took Irish out of the school system back home we’d be in a similar situation in a generation or two, which scares me. They’ve lost such a large part of their historic identity, they’re cut off from so much of their past. I’d hate to see that happen to us. Seeing the dire situation Scots Gaelic finds itself in motivated me to do something to help my own language. I pledged to speak exclusively to my future children as Gaeilge. I bought the book Speaking Irish at Home by Máiréad Ní Chinnéide (an online version can be found here: http://comhluadar.ie/wp-content/uploads/2013/04/final_bearla.pdf) and read it cover to cover.

After three years in Glasgow I moved to Canada, where my first child was born a year later. Hearing myself speak Irish out loud for the first time since secondary school was a bit jarring at first. But in a way it was easier in Canada than at home, as Canada is such a multicultural place that most people didn’t bat an eyelid when they heard me speaking it. I think most thought it was some Slavic language. I was asked several times if I was Russian!

The hardest part was hearing myself speak Irish out loud in front of other Irish people. I feared they would judge my waning ability, or think I was some showy langer. I still feel it, almost six years later whenever I visit home, but I push through.

When my second child was born, I quit my job and became a stay-at-home dad, mostly for financial reasons, but it didn’t hurt that by being the primary caregiver, I could expose my kids to a lot more Irish on a daily basis. There weren’t any Irish conversation groups in the part of Canada I was in so it was just me against a tsunami of English all around. There is an official Gaeltacht in Ontario though, ‘Gaeltacht Thuaisceart an Oileáin Úir’, but it was a four-hour drive away from where I was living.

I did visit once, but there’s nothing there except a signpost. Locals had very little knowledge about it either. I used to show my kids Irish language cartoons on TG4’s website. We now have a DVD copy of Song of the Sea, which is beautifully drawn and has a very moving story, and we’ve never watched the English language version. It’s important they see high quality Irish language programmes, on a par with what’s available in the English language. Every time I visit Ireland I make an effort to buy Irish language kids books. Despite the inconvenience that it sometimes causes, my kids are under the impression that while I can speak English, I can’t read it. At bedtime they get to chose the story, but they have to select an Irish book. I’ve also put up Irish language poster, including a beautiful framed map on the landing of Ireland, Scotland and the Isle of Man with all the respective placenames, rivers and mountains in Irish, Scottish Gaelic or Manx Gaelic. It’s important to me to normalise the language in the home as much as possible visually as well as aurally.

I used Duolingo to improve my own reading and writing skills, and I follow Irish language Facebook and Twitter accounts such as Nos.ie and Tuarisc.ie. I read articles with teanglann.ie (an online dictionary) open in to help with unfamiliar words and phrases

One of the things that turned me off Irish as a teenager was how insular it seemed, always looking at the past or referencing some rural tradition or experience. Now I can read articles about the new Star Wars film, or the marriage equality movement, or TV shows like Breaking Bad and Game of Thrones.

Since moving back to Scotland last year, I’ve started going to Scots Gaelic classes which has made me appreciate Irish even more. When you’re learning a language, you try and speak using as much of that language’s vocab as you can until you hit a word or concept that you don’t know (or don’t remember). My mind now reaches for the Irish equivalent when I can’t remember a word in Scots Gaelic, but I can get caught out sometimes. For example, “gruaig” means “wig” over here, not “hair” so you’d want to be careful complementing a lady on her new hairdo!