Up to €660,000 available for local diaspora projects 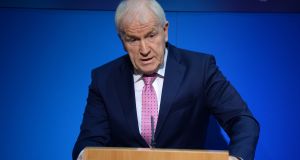 Local authorities and community groups are being invited to apply for up to €660,000 in Government funding for projects that “reach out to their diasporas”.

Speaking at the launch of the initiatives at Government Buildings today, Minister for Diaspora Affairs Jimmy Deenihan said “Irish people around the world have a keen sense of attachment to their place of origin”, and there was “great potential for communities and counties in Ireland to reach out to their own diasporas and build new relationships to benefit local and regional development”.

Under the Local Diaspora Engagement Fund, community groups and organisations will be eligible to apply for up to €20,000 per diaspora project.

Under the new Local Diaspora Strategy Development Fund, an additional €310,000 will also be available to local authorities for investment in strategies to engage their diaspora communities.

Both funds are paid out of the €1 million allocated to Mr Deenihan’s office at the Department of the Taoiseach for 2016.

They form part of a commitment in Global Irish: Ireland’s Diaspora Policy, published in 2015, to encourage greater diaspora engagement at a local and county level, as well as nationally.

Vice chairman of the Global Limerick Network Tim O’Connor, who chaired the Gathering in 2013, said the tourism initiative which saw 5,000 local events take place around the country for the Irish diaspora had “shown that the ‘homeplace’ is critical” in diaspora initiatives.

“2016 is a great time to be renewing our bonds. The first century of statehood has been defined by emigration, largely in a negative way,” he said.

“We now have a chance in a new century… to have a new relationship with our diaspora, not just based on what they can do for us, but starting with the [John F Kennedy approach], what we can do for them. These funds and the role of the local authorities and local communities in all of that is critical.”

A Local Diaspora Toolkit, published in November by the Clinton Institute in UCD, identified “a clear leadership role for local authorities” in building relationships with Irish people living abroad. It also highlighted diaspora initiatives and networks already underway around the country, and a practical guide for local authorities in how to set up their own projects.

He said listening to the diaspora is the most important step in identifying what kind of a relationship Irish people living abroad want with their home place. “Don’t assume. Don’t tell them. Ask them.”