The more the British learn about Ireland’s loyalists, the less they like 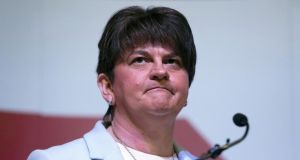 It’s a testament to the chaos of Brexit that the banality of Irish politics is something to feel smug about. I’d opined that as Ireland became increasingly progressive, Britain seemed to be regressing. My English companion prickled at the suggestion. “What about the DUP?” she answered, defensively. “They’re totally backward, and they’re Irish.” Her eyes glazed over as I explained that the Democratic Unionist Party is a political party in the United Kingdom, not the Republic of Ireland.

Living in Britain, I am reminded constantly of how loose a grasp most people here have on the exact nature of the union and of the disparate, nuanced political ideologies within it. More recently, I have learned that as slavishly devoted to Britain as the DUP are, the feeling has never been mutual.

Arlene Foster this week accused Boris Johnson of breaking his word to her, highlighting the extent of the rift. Just weeks after being greeted with cries of “No surrender!” at a DUP event in Manchester, Johnson hastily announced a new Brexit deal that would effectively put an economic border in the Irish Sea. The betrayal left unionists in a painful existential crisis while the Tories moved breezily forward.

In the same way a blackout drunk tries to piece together the night before, the English suspect they did something shameful in Ireland but can’t recall the exact details

Unionists have been hurt before. In response to the initial partition of Ireland in 1921, Edward Carson accused the Conservatives of using unionists to hold on to power, discarding them when it became politically expedient to do so. Carson said that the British nation was more than its government and that it was the British nation who in the end would do right by his tribe.

Unfortunately, I’ve observed that the more the British learn about Ireland’s loyalists, the less they like. The union has been preserved not out of love for Northern Ireland but by the general ambivalence towards it. The exact nature of Britain’s relationship with the island of Ireland is only vaguely understood by many in England. The education system here encourages ignorance when it comes to the grubbier aspects of nation’s past. In the same way a blackout drunk tries to piece together the night before, the English suspect they did something shameful in Ireland but can’t recall the exact details. Rather than “do right” by Northern Ireland, they’d much rather not think about it.

Then came the DUP’s confidence-and-supply deal with Theresa May in 2017, and Foster came blundering into mainstream British consciousness for the first time. Suddenly, the DUP and its worldview faced unprecedented scrutiny. Who were these religious fundamentalists – and why were they being given £1 billion? Even the Conservatives began to lose patience when it became obvious that the six counties’ membership of the United Kingdom was the principal block to getting Brexit done. Now it was not a matter of if Brexiteers would cut Belfast loose but when. As flattering as unionist adoration is – and as useful as their votes were – they weren’t worth staying in the European Union for.

Leave voters are outraged by the amount of money they contribute to the EU. Imagine if they found out about the £10bn they pay annually to subsidise Northern Ireland

In their craven pursuit of influence, Foster and her party enabled a Brexit strategy their own electorate did not support, only to get dropped when they were no longer useful. Shortly after Johnson announced his new deal, the British parliament forced equal marriage and abortion rights on Northern Ireland. A double hammer blow, it meant total humiliation for the DUP. How much longer could they have held out on their retrograde social politics if they’d just kept their heads down?

Having tried and failed to act like big men and women in London, they would probably like to go back to business as usual. Unfortunately for them, the cat is out of the bag and the spotlight is on in a way it hasn’t been in decades. The findings of the inquiry into the cash-for-ash scandal are imminent; how will the English feel about this conspiracy to rip them off? The cost of keeping the lights on in Ulster is a rabbit hole that unionists would surely prefer the British taxpayer not to go down. Leave voters are outraged by the amount of money they contribute to the EU. Imagine if they found out about the £10 billion they pay annually to subsidise Northern Ireland. That is money that could be pumped into the NHS – or, better yet, spent on erecting a giant poppy in the Channel, so that England never has to look at France again.

This week will be my first time voting in a British general election – and potentially my last. Johnson said this week that EU migrants should no longer be able to “treat the UK as if it’s part of their own country”. If there’s one silver lining to this frightening vision of the future, it’s that DUP votes will be surplus to requirements. Like Carson before them, they have been used and abused. Somewhere, Foster is WhatsApping Johnson, but the cad hasn’t responded. Her message has received two blue ticks, so she knows he’s seen it. He’s online, but he’s not typing. She sighs as the realisation builds: nearly 100 years after partition, the Tories have ghosted them again.