The Late Late Toy Show: ‘You can’t explain it to non-Irish people’ 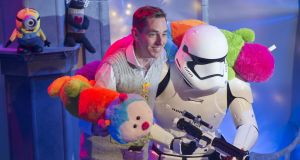 Ryan Tubridy on the set of the Late Late Toy Show. Is it true that we all want a child to throw Ryan Tubridy off with the occasional swear word? Photograph: Brenda Fitzsimons 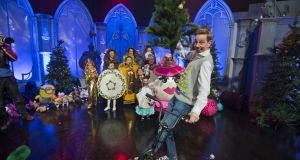 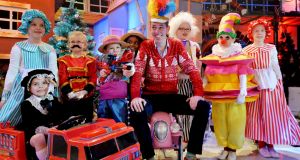 The Late Late Toy Show hosted by Ryan Tubridy. It’s not just about the toys or the Billie Barry kids. Photograph: Alan Betson

In advance of The Late Late Toy Show this Friday, Irish Times Abroad asked readers overseas to tell us about how they feel about the show which has become an annual Irish Christmas tradition for so many families. Does it bring back happy memories? Is it a new tradition for you or your kids overseas, now you can watch it online? Does it seem odd to watch such an “Irish” television programme when away?

Christina Prendergast, Finland: ‘There are some things you have to be Irish to appreciate’

Growing up in my house, letters to Santa were written long before the Toy Show aired, so we knew not to slap our eyes on anything new at the last minute. The toys were never what the show was about though. For us, it was an opportunity to sit down together and embrace some of the quirks associated with Ireland and with being Irish.

I tried to explain to my Finnish boyfriend recently the concept of the show, but I couldn’t quite articulate why it is such an important part of Christmas for so many Irish families.

When he said, “Isn’t it just a TV show advertising toys?” and was greeted with “No of course it’s not. Don’t even say that”, he genuinely looked at me as though I’d lost it. The fact that a TV show could be considered somewhat of an “Irish tradition” at Christmas completely perplexed him and, to be fair, why wouldn’t it?

You can’t explain to someone who isn’t from Ireland what the Late Late Toy Show truly is and, even if you can manage it, they will never really get it. From the humour that’s to be found in mishaps and children mortifying their parents, to families at home uniting in jealousy when the “one for everyone in the audience” prizes seem to be never-ending. It’s enjoyment of the things no other TV show can possibly capture.

Even if you watch the Billie Barry kids perform just so you can mumble about which ones you think are off-key, the Late Late Toy Show remains the definition of a ‘guilty pleasure’ for many Irish people. We all want a child to throw Ryan Tubridy off with the occasional swear word, or for a few toys not to work. We revel in the chaos of mini tractors crashing into the set or ramming into “the cheeky child from earlier” on a bike. It’s all in good spirit.

I’ll watch the show this year in Finland with my boyfriend and, while he might understand a bit more that it’s not “just” a show advertising toys, part of me knows he still won’t get it. There are some things in life you have to be Irish to really appreciate.

Karen Brennan, Western Australia: ‘I’ll be watching it on my iPad in humid 40 degree heat’

This year I will watch the Toy Show on my iPad in Derby, a small town in the Kimberley region in rural north Western Australia, in a humid 40 degree heat. I used to watch it with my parents and two sisters in front of the fire surrounded by the junk food I crave here in Oz. Luckily I will be home for Christmas this year so I will get to catch up with the family (and eat Cadbury’s and Tayto). But they didn’t want to wait for me to get back to watch the Toy Show for fear of missing out. So I am delighted I can catch it over here and see what craziness the show brings to the world this year. Australia is half a world away and, in a lot of ways, especially with Christmas being in the sweltering heat of summer, it is very different from home. So it is good to get snippets of the Emerald Isle every now and then. It’s worth its weight in gold over here.

Jackie McCarthy, New York: ‘My four-year-old daughter wants to be on the show’

My husband and I emigrated to New York from Rathcormac, Co Cork, 14 years ago. Yet I can still remember the excitement of coming home from school the day of the Toy Show and I still love it as much today. We now have a four-year-old daughter, Maeve, who loves the Toy Show. It’s a big event in our house each year. Of course she wants to be on the Toy Show.

Sarah and Mark Doyle, Melbourne: ‘We’ll be watching it at breakfast with a big Irish fry up’

The Toy Show has always been a huge tradition in my husband’s house. Everyone would get into their PJs and, in recent years, have wine and order a Chinese takeaway. His mum always has the house decorated in time for the show.

This year we’ll be watching it live at breakfast time in Melbourne and plan to have a big Irish fry up. Our first baby is due on December 3rd and my mother-in-law and father-in-law, Matt and Anne Doyle from Artane in Dublin, will be here with us. Hopefully the baby will be born by then for his first Toy Show.

Sarah O’Leary, Bathurst: ‘It used to be the one night we could agree what to watch on TV’

I have been living in Australia for eight years now and have always tried to Skype my family the night the Toy Show is on to watch snippets of it. It used to be the one night of the year when everyone in the house used to agree on what to watch on television. This year I shall be watching it from Australia and I will be able to Skype my family at the same time so as to feel that we are all together. It brings us back to our childhood.

We have been Saudi Arabia for the past seven years and I’m going to try to link up with the Late Late Toy Show live this year if I can. My oldest child remembers watching it and I grew up on it too. We normally watch when we are at home in Ireland during the summer as my parents record the show and keep it for us. I’m very proud of anything Irish and, as my kids are half Saudi, there’s even more of an impact.

Want to watch the Late Late Toy Show from abroad? Click here to find out how.