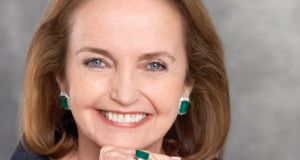 Loretta Brennan Glucksman ‘has shown herself to be a proud Irish-American, giving back so generously to the land of her ancestors’, Mr Deenihan said.

Irish-American philanthropist Loretta Brennan Glucksman has been awarded the Tipp O’Neill Irish Diaspora Award for her “outstanding contribution to the Irish diaspora”.

Ms Glucksman, whose grandfather David Brennan was from the Inishowen fishing port of Greencastle, was chairperson of the American Ireland Fund for 18 years. The Fund has raised more than €300 million supporting projects relating to peace and reconciliation, arts and culture, education and community development in the Republic and Northern Ireland.

Ms Glucksman and her late husband Lew set up Glucksman Ireland house at New York University, a centre for Irish and Irish-American studies offering courses in history, Irish language, literature, music and politics. She was also involved in the redevelopment of the Irish Arts Centre in New York, and served on the boards of Trinity College Dublin, the Royal Irish Academy and the National Gallery of Ireland.

Presenting the award in Buncrana in Co Donegal, Minister of State for the Diaspora Jimmy Deenihan said Ms Glucksman “has shown herself to be a friend and champion of Ireland in the US”.

“She has made an immense contribution across so many areas on the island of Ireland and has shown herself to be a proud Irish-American, giving back so generously to the land of her ancestors,” Mr Deenihan said.

“She has also made an extraordinary contribution to the development of the Ireland-US relationship, working hard to strengthen the strong ties between our two countries, forged as they are on bonds of kinship and of history.”

The award is presented to a member of the Irish diaspora each year in memory of Tip O’Neill, an Irish-American politician with roots in Co Donegal who campaigned for peace in Northern Ireland as a speaker of the House of Representatives.

Ross O’Carroll-Kelly: ‘Sold to the man in the Ireland jersey with a bowtie tied around his neck!’
Real news has value SUBSCRIBE