‘Life as an Irish teacher in Dubai is exciting and diverse’

In Ireland, staffroom conversations revolved around permanency and panels 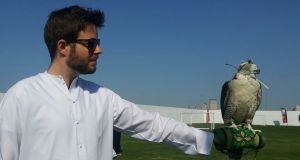 ‘Taoiseach Enda Kenny has said that 2016 will see more returning emigrants than those leaving, for the first time since 2009. As one of the recently departed the Government is calling to return, I am not convinced.’

As I sat in the arrivals hall café in Dublin’s Terminal 2 with a freshly-shaven face and slightly oversized suit, I found myself in what felt like a very strange situation. Sitting opposite me was the principal of an international school in Dubai, situated 6,000km away from my home in suburban Dublin. He and his wife smiled warmly at me, and in the corner of my eye was my father, glancing over protectively from his perch on the mezzanine floor.

Now, an expatriate in my fifth year in Dubai, I don’t believe the situation was all that unusual; I’ve taught lessons in the desert, in chilly air-conditioned classrooms, and on the 125th floor of the world’s tallest building.

The life of an expat is an exciting one, full of constant change, and nowhere more so than in Dubai. Life in the city is diverse, vibrant and fast-paced, and this is replicated in the schools and classrooms.

My first year as an expat teacher was confusing, exciting and ever-changing. I decided to make the step into international teaching because I was uncertain about my future prospects at home. “Are you on the panel?” “Are you a permanent teacher yet?” These were the questions that dominated the staffrooms in which I sat. The whole setup up bewildered me, and the atmosphere it created among teachers was hugely intimidating.

I soon found out that the setup and atmosphere in international schools here in the United Arab Emirates was the polar opposite.

There are roughly 175 private and international schools in the UAE. It is projected that the number will reach 198 by the end of 2016. It is commonplace for these schools to provide facilities such as tennis courts, swimming pools, auditoriums, athletics tracks and more. The atmosphere in the staffrooms is vibrant and energetic, with the majority of the teaching staff between the ages of 25 and 35.

I was suddenly subjected to a whole world beyond Dublin, beyond Ireland. The possibilities for my own career seemed limitless. And there was no mention of a panel.

Alongside all of this excitement and change, there was one constant: my Irishness. I felt more Irish, I spoke more Irish (outside of the classroom of course), I was proud to be Irish. It probably had something to do with the fact that I was one of five Irish teachers in a school with over 70 staff. The four Irish girls and I formed a little committee within our work sphere, which involved chatting in our native tongue, snowy flights home for Christmas, and plenty of Barry’s tea on our lunch breaks.

Two of the girls remain happily in that first school, one has made the difficult decision to return home, and the other is somewhere between Australia and Asia.

Growing up in Celtic Tiger Ireland I was told I was lucky. I could study whatever I wanted. I would never struggle. My parents and teachers told me of leaner times when a lot of young, educated 20-somethings were forced to emigrate to the US, Canada and Australia for work. We have gone from being “Celtic Tiger cubs” to “Generation Emigration”.

Taoiseach Enda Kenny has said that 2016 will see more returning emigrants than those leaving, for the first time since 2009. As one of the recently departed the Government is calling to return, I am not convinced.

My own uncle moved to Ottawa, Canada in the late 1980s out of necessity, and often dreamed of returning to Ireland when the time was right. That time never came and now, in his late 40s, he talks about being “trapped” abroad.

In 2016 I would ask: other than emotional attachments, what incentives are in place to encourage “Generation Emigration” to return home?

While I’m waiting to figure out the answer, I’ll enjoy the highs and lows of international teaching here in Dubai.

Michelin 2021: Which Irish restaurants are in the running at tonight’s awards?