Ever think about a working holiday in Chile? 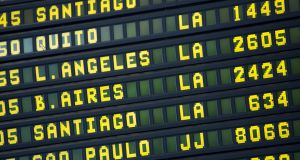 There is no limit to the number of Irish people who can travel to Chile under the new working-holiday scheme.

Are you looking to spend a year abroad, but wanting to go somewhere more unusual than Australia or Canada? Ever think about going to Chile?

A new working holiday agreement between Ireland and the South American country will allow Irish people to live in Chile, and Chileans to come to live in Ireland, for up to a year.

The Department of Foreign Affairs says the primary purpose of the visa is travel, but temporary work or study will also be permitted.

Up to 100 Chileans will be allowed to come to Ireland under the scheme each year, but there is no limit to the number of Irish who can participate. Applicants must be between 18 and 30 years of age.

The deal was signed by Minister for Foreign Affairs Charlie Flanagan, and the Chilean foreign minister Heraldo Muñoz during his visit to Ireland last week.

Details on how to apply for a Chilean working holiday visa have not been published yet, but will be made available “in due course”, according to the Department of Foreign Affairs.

Further information on working holiday visa options for Irish people can be found at dfa.ie/travel/visas .