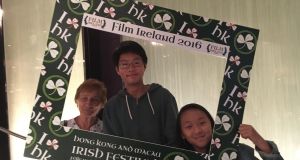 Marie, Louis and Layla Carroll at the opening of the Film Ireland festival in Hong Kong.

Hong Kong is the city that gifted us the violent visual poetry of John Woo and his black-suited face-offs, the balletic martial arts thrills of Bruce Lee, and the surreal hip love stories of Wong Kar-wai. James Bond, Batman and Suzie Wong have all plied their trade on its packed streets, and its neon lights, elegant harbour and shiny skyscrapers are the setting for many of my cinematic dreams.

Staging an Irish film festival against such a storied backdrop is a challenge, but this is a city that lives and breathes cinema, and one that welcomes visual storytelling from all over the world.

At least that’s how we choose to read the warm applause for John Carney’s Sing Street, which opened the first-ever Film Ireland at The Grand cinema in Tsim Sha Tsui.

Across the harbour, an Irish-liveried “ding ding” tram rattled its way along Hennessy Street in Wan Chai, a busy thoroughfare connecting Queensway and Causeway Bay in the west, named after a Cork man, Sir John Pope Hennessy, eighth governor of Hong Kong between 1877 and 1882.

Thousands of Irish living in Hong Kong are Hennessy’s natural inheritors today, representing a real cross-section of life in the bustling metropolis of 7 million, working in high finance, teaching and government. Last year was the city’s inaugural St Patrick’s Parade in Admiralty, and Film Ireland formed part of a plan to take things a step further this year with the Hong Kong and Macau Irish Festival.

Ireland’s General Consulate was set up two years ago and this year, it and the Irish Chamber of Commerce tried to dramatically raise the profile of Ireland in Hong Kong and Macau. So the Hong Kong and Macau Irish Festival went on for six weeks, with over 10,000 people attending events in the two former colonies.

Hong Kong audiences were keenly aware how it’s been a big year for Irish film; John Crowley’s Brooklyn and Lenny Abrahamson’s Room had already been big hits in Hong Kong before Film Ireland, and the Cannes Jury Prize winner The Lobster, directed by Jorgos Lanthimos and featuring Colin Farrell, did really well during a brief run during the Hong Kong International Film Festival (HKIFF), and sold out quickly.

Film Ireland was run in collaboration with HKIFF, whose president Roger Garcia is a fan of Irish cinema and who visited Ireland last year to talk about Hong Kong cinema there.

The event was organised by local lawyer, Chamber of Commerce member and film fan Padraig Walsh, and curated by this correspondent.

Other big elements in Film Ireland were Viva! by Paddy Breathnach, while Sing Street, which went down well at Sundance and is getting good reviews since its US bow, struck a chord.

Neil Jordan’s Michael Collins, showing as part of the 1916 anniversary, Calvary and Song of the Sea rounded out the programme.

“We thought it was important to showcase Irish talent in film to local and expatriate audiences in Hong Kong and judging by the enthusiastic response from movie goers, we’re onto something,” said Ireland’s Consul General, Peter Ryan, who is a past pupil of Synge Street.

As part of the broader festival Fr Joseph Mallin (102), the only surviving child of the executed 1916 Rising leaders, was presented at Wah Yan College with the freedom of the city of Dublin by Lord Mayor Crìona Nì Dhàlaigh.

His father was Commandant Michael Mallin, who commanded the Irish Citizen Army at St Stephen’s Green during Easter Week.

The Jesuit priest has lived in Hong Kong since 1948, and last visited Ireland to celebrate his 90th birthday. He now considers Hong Kong his home but keeps in touch with the news from Ireland and corresponds regularly, in Irish, with his relatives.

He was just an infant when his father was executed in Kilmainham Gaol, but his father’s last wish was that he would become a priest. His mother was pregnant with the couple’s fifth child. He has said she rarely talked about her executed husband, but he did see her cry once on the anniversary of his death.

The festival also included Macau’s first ever St Patrick’s Day Parade, with Irish food and drink workshops with young Chinese chefs. Among the visitors to the two territories was Marita Conlon McKenna, author of Rebel Sisters, and the musician Greg Harrington.

The Hong Kong cop/triad movie Infernal Affairs was the inspiration for Martin Scorsese’s The Departed, the script of which in turn helped propagate the urban legend that Sigmund Freud said the Irish defy psychoanalysis.

He probably never said it, but the Hong Kong and Macau Irish Festival shows that there’s nothing like Irish culture for some psychotherapy.