Emigration of Irish nationals falls 13% with 35,300 leaving in year

Just one in seven emigrants were unemployed before leaving, CSO figures show

The number of Irish people leaving Ireland remains high, despite improvements in the economy and a fall in unemployment.

Figures published by the Central Statistics Office on Wednesday show 35,300 Irish people emigrated in the 12 months to April 2015, a 13 per cent drop on the previous year when 40,700 Irish nationals left.

The news comes as the CSO also reported a further drop in Ireland’s unemployment rate to a six-year low of 9.5 per cent.

A total of 80,900 people of all nationalities moved out of Ireland in the year to April, 1,000 fewer than the previous year.

Immigration has increased for the third year in a row, with the numbers arriving here (including returning Irish nationals) rising 14 per cent to 69,300.

Combining the number of emigrants minus the number of immigrants, the net outward migration figure is 11,600, down 45 per cent on the previous year. 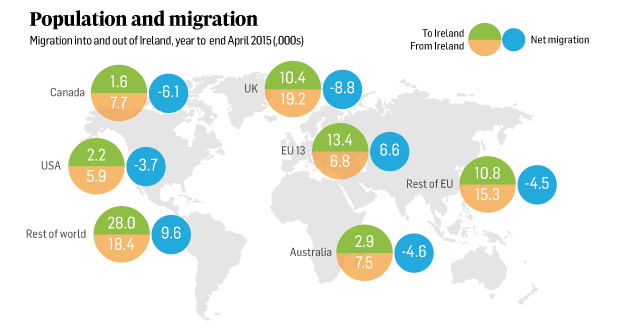 Irish nationals continue to experience net outward migration, although at a lower level than the previous year, falling from 29,200 to 23,200.

Some 11,600 more non-Irish nationals arrived here than left in the year, up 47 per cent on the previous 12 months.

The figures also show that the majority of people emigrating were either at work or studying prior to leaving Ireland, with fewer than one in seven unemployed, down from one in five the previous year.

Slightly more than half of emigrants aged 15 or over had a third level degree or above, with 39,800 graduates leaving, the highest number since the CSO began recording this in 2009. A total of 31,700 people with third-level qualifications moved to Ireland in the 12-month period, however, bringing the net loss of graduates to 8,100.

The UK continues to be the most popular destination for emigrants of all nationalities leaving Ireland, with the numbers moving across the pond rising 7 per cent to 19,200.

Canada witnessed a substantial jump in numbers arriving from Ireland, from 4,700 to 7,700, due to an increase in the allocation of Canadian working holiday visas for Irish people at the beginning of 2014. The number of men going to Canada significantly outnumbered women, by 5,600 to 2,100, reflecting the opportunities available in male-dominated professions including construction and mining.

Analysis: More jobs not having expected impact on migration figures

Case study: 'For me to come back, I'd need the security of a full-time job'

In a vaccinated New York, we look forward to the day we can travel to Ireland

Cinemas are open. Dining is at 75 per cent. A full re-opening is expected on July 1st