The RTÉ reporter Evelyn O’Rourke discovered she was pregnant on a Monday. That Wednesday she was told she had cancer 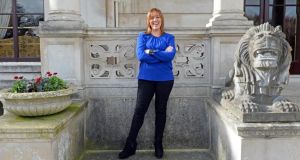 ‘If I had known what was ahead of me for the next year I would have gone to bed and not got up again,” says Evelyn O’Rourke, the 41-year-old reporter for Arena , on RTÉ Radio 1. In 2010, two days after the surprise discovery that she was pregnant with her second child – her first, Oisín, was not yet six months old – she was diagnosed with breast cancer. She would have chemotherapy, and lose her hair, while she was pregnant (and her husband, John McMahon, would shave “J&E” into her stubbled head).

As she recounts in her new book, Dear Ross: An Amazing True Story of Love and Survival, O’Rourke was still on maternity leave with Oisín when she noticed what looked like a red pimple near her nipple. Knowing that women’s bodies change during pregnancy, she kept an eye on it just in case. Meanwhile, her much-loved boss at the time, Gerry Ryan – “I adored him!” – was found dead, bringing up for O’Rourke memories of her own father’s sudden death from a heart attack, in 1998.

After a few stunned weeks of grief she finally had the growth checked out, still thinking it was nothing, even when a surgeon ordered an immediate biopsy. She discovered she was pregnant on a Monday while awaiting the results; she received her cancer diagnosis that Wednesday, and shortly afterwards she had a lumpectomy, losing her nipple.

Usually chemotherapy would start immediately, but she was in the first trimester of pregnancy. Her oncologist, John Crown, said they would wait until the second trimester: chemotherapy would then be safe for the baby, as the drugs could not cross the placenta at that stage.

Astonished that this was even possible, O’Rourke went home to spend the early weeks of her pregnancy caring for Oisín, but a grave postsurgery infection sent her back to hospital. She had a temperature of 41.3 and was delirious, with no idea what was going on around her.

But O’Rourke is a glass-half-full sort of woman, and her book is a study in resilience. It seems that delegating can save your sanity. She was fortunate to be surrounded by a gem of a husband (who also works at RTÉ), her mother, Peigín, who lives next door, a supportive family, and loyal friends. O’Rourke looked around and realised that the only way she would make it through the ordeal was to list the abilities of each person in her circle, then give them jobs to do. “It was about outsourcing your life for nine months,” she says.

“Other mums-to-be were at yoga class, and I was hooked up to a chemotherapy drip. It was wrong and cruel. I felt like I was being kicked and slapped and beaten . . . What kind of a mother am I, letting this shit into my body now?”


Happy and normal and loving life
Her husband, who kept his bike outside the window of his office, so that he could cycle to be with her at St Vincent’s hospital within minutes, told her to imagine their two children, one yet unborn, on the beach in Kells Bay, on the Ring of Kerry, in a few years’ time, hanging out on a picnic blanket, wearing cute bodysuits and arguing about biscuits and flasks. “They are happy and normal and loving life, and you and I will just wink at each other, knowing how long we have waited for this scene,” he told her.

Her book’s title comes from letters she wrote to her unborn child as therapy, then continued after his birth when John and her mother told her how good it seemed to be for her to write.

Dear Ross has many moving moments. One of the most affecting occurs the middle of O’Rourke’s cancer treatment, when the “black wolf” of fear returns – and, alone at home, she panics. Who would be best in this situation? She calls the family’s Mr Fix It, her brother Colm. Within 15 minutes he arrives at her house and lies down on the bed beside her, still in his suit and tie, and holds her while she cries.

There are few moments in the book when O’Rourke breaks down – so few, in fact, that she had worried that she was almost too steady. She eventually contacted Arc, the cancer-support charity, for counselling, because she wanted a detached observer to tell her if she really was doing as well as she thought.

“When you have two small children who need you, you need to be calm and strong. I felt it was my responsibility to have a mental-health MOT,” she says.

Although she got a clean bill of mental health, “I was aware that nobody has superpowers. Many bright people experience mental-health problems, and I wanted to face that.”

She’s very funny about the need for distraction. Her sister, Kim, who was always available even though she had young children of her own, once brought her to a posh spa for a day. Kim had to make O’Rourke, who had endured cold chemicals dripping into her veins, bite her tongue when another pregnant spa visitor complained, “What are you using in the treatment? I hear pregnant women mustn’t have lavender.”

O’Rourke left her wig behind when she went for her Caesarean section, as she knew it would be too hot to wear in hospital. “We had named the various stages of my hair growth from Kojak to Sinéad O’Connor to Halle Berry. At that point I was a bit beyond Sinéad O’Connor but not quite in the Halle Berry department.” Today her long straight hair is back, and she is glowing.

“Dear Rossy,” the book concludes, “it’s over three years since the nightmare began, and I have had my third clear annual mammogram and life is now good . . . And always know this: even when I read back to all the horror we endured in those months during pregnancy, I would do it all again for you . . . In a heartbeat. For your heartbeat. Love, Mama.”


Dear Ross: An Amazing True Story of Love and Survival is published by Hachette Books Ireland