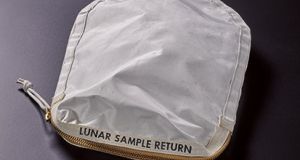 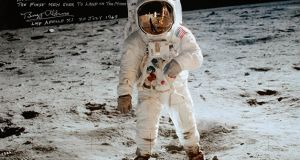 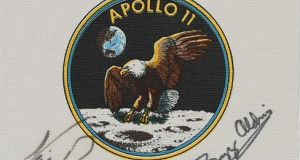 Space is the final frontier for auction house Sotheby’s whose star lot in its inaugral space exploration-themed auction is a bag with an astonishing back story and a guide price to match.

The bag was used by the first man to walk on the moon, Neil Armstrong, to collect samples of rock and dust from the area known as the Sea of Tranquility. It was one of the lunar sample bags taken aboard the 1969 Apollo 11 mission and returned ot earth for analysis.

Somehow the bag labelled in capital letters, ‘Lunar sample return’ got mixed up with other sample bags that were not used to hold lunar material and it somehow got forgotten about eventually surfacing at an auction where its current owner Chicago-area lawyer Nancy Lee Carlson paid US$995 for it as part of a mixed lot, according to Reuters. She then sent it to NASA to test its contents.

The agency confirmed its provenance and then tried to keep it as ownership of moon rocks, dust and other artifacts from missions it generally restricted.

A legal battle ensued with NASA losing the fight and a US judge ordering the agency its return it to owner Carlson earlier this year.

The bag is now the star lot of the sale and has a guide price of between US$2 and US$4million.

The sale also includes a spacecraft manufacturers project presentation model, a 1:8 ratio design by NPO Energie. Almost toy-like in looks its hard to believe that this could kill. It has a guide price of between US$10,000 and US$12,000.

As the two other astronauts blasted to the moon’s surface in Eagle and got to walk the moon pilot Michael Collins sat alone in the mothership Columbia, “sweating like a nervous bride”, as he wrote in a note at the time, Robert McKie reported in The Observer. An emblem of the Apollo 11 mission belonging to Collins and signed by Armstong, one of the few artefacts that Armstrong did sign, is also for sale.

It has a guide price of between US$40,000 and US$60,000. Cosmonauts Collins and Armstrong both had Irish roots, the former’s family hailed from Dunmanway, Co Cork while the latter’s originated from Co Fermanagh.

Also up for sale is a photograph of Buzz Aldrin taken by Armstrong at the crew’s Tranquility base and signed and inscribed by Aldrin. This iconic image is guiding between US$3,000 and US$5,000 and would make a wonderfully generous, if slighty tardy, Father’s day gift as the auction is timed to coincide with the 48th anniversary of the Apollo 11 lunar landing, taking place in New York on July 20th. Sothebys.com