The ‘Irish Times’ Family Values poll made some surprising discoveries 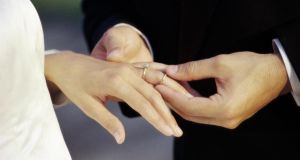 1: Blood relatives come second
Platonic and romantic relationships are more important than blood ties. Most people said their partner was the person they spent most time with, the first person they shared a problem with, and the biggest influence on their lives. Friends were next in importance, followed by family. Read more here

3: The younger you are, the bigger your wedding
The survey showed that under-35s had wedding celebrations averaging 141 people. Those aged 55 or over had an average of 90 guests at their weddings. Read more here

4: Paid childcare is a minority pursuit
Sixty per cent of parents mind their own children at home. The most common childcare arrangement for working parents is not a creche or childminder but leaving the child with granny. Read more here

6: Baptism is still big; prayer is going out fashion
Ninety-three per cent of parents with young children have had them christened, but only about a third regularly pray or attend Mass with their children. Read more here

7: The older you are, the less you worry
Money, or too little of it, is the top concern that keeps people awake at night. The survey also found that women were more likely than men to say they worried about family issues. Retired people worried least. Read more here

9: The old want the young to mind them
Seven in 10 people would like their children to care for them in old age. Just six in 10 expect it to happen. Read more here

10: Fathers are getting better
Two- thirds of people believe the relationship between fathers and children is better now than it was for their parents’ generation. Why? Fathers themselves say it is because they spend more time with their children. Read more here

The Irish Times Ipsos MRBI Family Values poll is based on a representative sample of 1,000 adults aged 15 and over. It was carried out between February 5th and 19th

Drivers, slow down for the good of the planet (and your wallet)
4

London Fashion Week: Paul Costelloe back in form with a little help from his son
5

Be Kind: how to change a person’s day with just one word
8