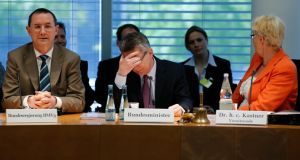 On the “most likely to succeed Angela Merkel” list, most Berlin watchers would have given good odds to defence minister Thomas de Maizière.

A Merkel confidant and her former chief of staff, the 59-year-old earned a reputation for himself as a discreet, dependable pair of hands in political circles. Now his reputation has sustained dents over Germany’s aborted purchase of four reconnaissance drones – with the potential for further damage ahead.

Last month Mr de Maizière announced he was cancelling the “Euro Hawk” project after it emerged that the current model by EADS and Northrop Grumman had no anti-collision technology, meaning the drones would be unable to fly in European airspace.


Costly drones
Adding this capability would cost €600 million with no guarantee of success, the minister said, announcing the discontinuation of a project that had already cost the German taxpayer about €500 million.

Up to last week, the minister hoped the matter would end with a dressing-down during an appearance at the Bundestag defence committee.

But his testimony threw up as many questions as it answered, most crucially: when did he know the drone project was doomed and why did he not intervene sooner?

Mr de Maizière told the Bundestag committee he learned of the programme’s problems last month and acted immediately to shut it down. He has since admitted receiving a 38-page dossier with relevant information in December. Der Spiegel magazine reported yesterday he was aware of rising costs associated with the project last year but declined to respond to parliamentary queries on the matter.


Defence committee
At a second appearance at the defence committee yesterday, opposition politicians accused the minister of tripping himself up with contradictory testimony. Afterwards, at a hastily-arranged press conference, Mr de Maizière denied making misleading statements to the committee. He had not acted earlier on information flagging problems in the project because he believed they could be solved. “In retrospect, when I heard about ‘solvable problems’ I waited too long. I should have asked questions, and requested a report about the scale of the problems and how they would be rectified,” he said.

Mr de Maizière insisted yesterday he would not resign and a spokesman for Chancellor Merkel insisted she had full confidence in her minister.