Why do we use time-saving devices to work longer? 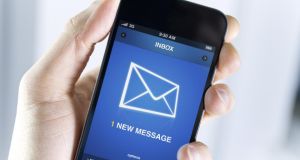 Always on: We are the ones making the choice, not the technology

The end of holidays means one thing for many people: reconnecting to technology. On goes the mobile phone and off goes the automated out-of-office reply as you return to work mode.

The paradox of innovation is that it purports to make our lives easier, but generally makes us work harder. The philosopher Bertrand Russell identified the phenomenon 80 years ago in his essay In Praise of Idleness. Advocating a four-hour day, he argued that we were failing to exploit the liberating power of technology due to a Victorian mindset that decreed that unless someone is labouring they are somehow in sin. “Modern methods of production have given us the possibility of ease and security for all; we have chosen, instead, to have overwork for some and starvation for others.”

His advice resonates today in another era of high unemployment. We can use technology to remodel the labour market for good or ill. Whatever the outcome, we are making the choice, not the technology. So Russell stressed, and his view is endorsed by Joel Walmsley of University College Cork’s department of philosophy.

Dr Walmsley, who has a research interest in artificial intelligence, debates a path to today’s Russellian idea: The leisure time created by technology doesn’t have to be filled by more work.

“I recently observed a mother and daughter having a leisurely lunch together in a restaurant. Their conversation was repeatedly interrupted by whatever information was being offered up by their mobile phones: text messages, Facebook updates, Candy Crush games and whatnot.

“It’s tempting to say, ‘Oh, they’re being controlled by their technology’, but all that is really happening is that technology is providing a greater variety of ways for them to (mis)behave.

“Let’s be honest: we are still in charge, it’s just that, to the extent that technology is ever-present and entertaining, its apparent hold over us is simply due to lapses in concentration or good manners. So I think it would be a mistake to attribute agency to our technological developments in any literal way.”

By memorising things for me, is technology expanding my mind or contracting it?

“The idea of technologically extending or augmenting aspects of our biological make-up is nothing new. My cat is implanted with a microchip so that he can be scanned and returned if he’s lost. My grandfather had a pacemaker that helped regulate his heart

beat. So when we think about technology expanding our capacity for information processing, we ought to be thinking on a continuum with these kinds of familiar instances.

“The philosopher Andy Clark in his book Natural-Born Cyborgs outlines a number of cognitive technologies that permit this kind of outsourcing. Written language is probably the oldest: By writing a shopping list I can expand my own (unreliable) on-board memory capacity. Through the written word, I can evaluate arguments and ideas that are too complex for working memory alone. And now we’re living in a world where most of us carry always-on internet-ready devices that can instantaneously access more or less any piece of information you wish. So I suppose I’d say that yes, technology is expanding our minds, but this is something that’s been happening for a very long time.”

Will there come a day when the human mind gets squeezed out of the picture altogether as technology expands?

“The worry is that we – or our biological brains – are somehow being relegated to the periphery, but I think that’s misguided for at least two reasons. First, it maintains a distinction between ‘us’ and ‘the technology’ that should probably be broken down.

“I’m inclined to think that when some kind of cognitive technology – such as a shopping list or a smartphone – is used, we should regard it as an integral part of the mind. As Andy Clark and David Chalmers have said, cognitive processes ain’t all in the head. Rather than thinking of us using the technology or the technology using us, it’s probably better to think of the relationship as a symbiotic one.

Is technology giving us more leisure time, and helping us to live ‘the good life’ as Aristotle would see it?

“It should, but it doesn’t. Here’s an idea from Russell’s essay: imagine that technological developments in widget manufacturing mean that what used to take the eight hours of human work can now be done in half the time. This should mean that everyone only has to work four hours. Instead, we produce twice as many widgets as we need, some companies go bankrupt and half the workforce are laid off. There’s just as much ‘leisure’ in both outcomes, but in the one we seem to have chosen, half the workforce are idle, half the workforce are overworked, and everyone’s still miserable. Russell asks, ‘Can anything more insane be imagined?’

“I don’t see anything different today. First, the technology that reduces the need for hard work is concentrated in the hands of those who are comparatively rich – in money and leisure time – and who have a vested interest in maintaining their position at the top of the social hierarchy. Second, those in power continue to promote the idea that the devil finds work for idle hands and that a hard day’s toil is the only true path to virtue.

“Russell describes this as foolish. I think it’s tragic.”

Question: How should I interpret my exam results?

Edward Carpenter replies: “Great success in examinations does naturally not as a rule go with originality of thought.”