When it comes to human rights, we want duty-free

Human rights are brought ‘into disrepute by trying constantly to inflate all of them’, says Onora O’Neill 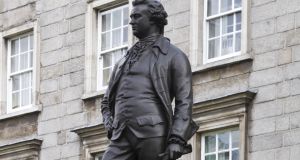 Baroness Onora O’Neill is an intellectual with a common touch. She has done the BBC Reith lectures, a Ted talk on trust and accountability that has been viewed more than a million times, and will next week deliver a paper in Dublin on human rights – How to Turn Lofty Ideals into Real Commitments – as part of President Michael D Higgins’s ethics initiative.

It’s billed as the inaugural Edmund Burke Lecture in memory of the Trinity College Dublin graduate and philosopher of conservatism (next time you’re passing College Green, look through the gates and that’s his statue on the left). While Burke supported struggles for self-determination in the US and Ireland, he criticised the notion of abstract rights and asserted instead the primacy of inherited rights and established customs.

O’Neill, who was born in Northern Ireland and whose credits include an honorary doctorate from the National University of Ireland, shares something with Burke in emphasising the importance of duties in tandem with rights. Together, they provide today’s idea: If you take rights seriously you must ask how are they going to be delivered.


What was Burke’s attitude to human rights, and is it relevant today?
Onora O’Neill: “My view is that Burke was committed to an account of the rights of man; there’s no doubt about that. He then insists there is something mistaken about giving an abstract account of the rights of man, and then he talks about circumstances. I think circumstances are very important if we want to take rights seriously.

“You can’t simply assume that, magically, these rights will emerge. Rights are very closely allied to there being quite a strong competent state, and that means several things, including the rule of law and an adequate tax base. It does not necessarily mean democracy, though that might come down the road.

“What’s a consistent way to interpret, let’s say, the rights of the child? I don’t know if you’ve ever looked at the Convention on the Rights of the Child. It starts out: ‘mankind owes to the child the best it has to give’. If it owes the child that much then nobody else has any rights at all.”


This is an error, you say, to promote one particular right over others?
“I don’t really believe these single-issue conventions help us very much because in the end you have a question of how do you get these rights into one frame.

“I should mention one thing, which is edgy. Yesterday, I was talking to the UN Special Rapporteur on women’s rights and she said it was a great pity that the [British] Equality and Human Rights Commission [which O’Neill chairs] has embraced ‘neutralism’. I couldn’t make out what neutralism was; then gradually I realised her complaint was that gender rights – which were very important in her mind – were diluted by thinking about things like disability and age and race and ethnicity.”


Has the popularity of rights created a culture of entitlement? People want rights without giving back.
“That’s always the problem, isn’t it? Rights have so much more charm to most people than duties. Asking, ‘What should I get?’ rather than, ‘What should I do?’ is a very human thing. But of course if we all do that it’s nonsensical.

“What people do is say: ‘Well, of course, there are duties, but the duties lie with the states.’ That is rather fascinating as a move because actually the states don’t hold those duties if you look at the international documents. They hold second- order duties to ensure that somebody carries those duties.

“You have got to answer the question, if you take these things at all seriously: How are the rights going to be delivered?”


Is there a risk that confidence in human rights will collapse if these issues are not addressed?
“I am pretty worried about that. We have always had quite a lot to fear from the enemies of human rights, but frankly we have quite a lot to fear from their friends, too, who are bringing rights into disrepute by trying constantly to inflate all of them and forgetting that none of them will be realisable without somebody held to obligations.

“There are states in northwestern Europe and other parts of the world which have done their level best to meet all the standards, but they’re coming under pressure from a completely new direction. Globalisation has reduced state power, so the very institutions upon which all the duties are loaded turn out to have more restrictions on them. We see that in hyperregulation and difficulties negotiating international agreements but also international tax evasion.”


On a separate note, you’ve challenged conventional wisdom on accountability. How are we going about it the wrong way?
“Accountability must be a good thing, but if you hold people to account in too many different ways they end up looking only at the people who are holding them to account, and not to the people they are meant to serve, and that seems to me to be a catastrophe. It has happened very widely, for example with university rankings.

“Do you know we are getting a new one called U-Multirank? Do we need this? Yes, like a hole in the head. But of course it’s terribly seductive to people. I find it tragic that people warp the education that students are receiving in order to ‘game’ the system.”

Question: Should teaching and ideology mix?


Hannah Arendt replies: “Exactly for the sake of what is new and revolutionary in every child, education must be conservative; it must preserve this newness and introduce it as a new thing into an old world.”