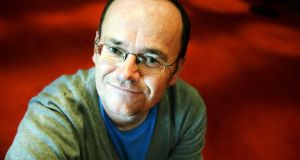 DruidShakespeare writer Mark O'Rowe: This could “potentially bring the wrath of Shakespeare authorities down on our heads”

Ireland has never come out well from Shakespeare’s tragedies, comedies or his history plays. It is a theatre of war in Richard II, a hideout for refugee Scots in Macbeth, a very crude punch line in The Comedy of Errors, and offered as a romantic gift in Henry V. The last play also features a vexed and slurring stage Irishman, MacMorris, who famously says, “What ish my nation? Ish a villain and a basterd and a knave and a rascal.”

At a breakfast press conference in Dublin today, Druid Theatre Company announced bold new plans to provide a different answer. As part of the celebrated Galway-based company’s plans for its 40th year, Garry Hynes will direct a new version of four of Shakespearean History Plays in an adaptation by Dublin writer Mark O’Rowe. The new production will premiere in The Mick Lally Theatre, a tiny venue for such a grand undertaking, in May, and will tour throughout Ireland and on to New York’s Lincoln Center Festival, who are the production’s co-producers, during the summer.

“How does Ireland do Shakespeare’s History plays, in particular, when the relationship between our two islands is a colonial one, and a difficult colonial one for a period of 800 years?” asked director Garry Hynes. “I have often envied other countries, in that they have a distancing lens of translation. We don’t have that.”

Instead, O’Rowe has edited Richard II, Henry IV parts one and two, and Henry V into a continuous, unified work, pursuing a coherent story through a performance that may last up to six hours. “We needed somebody to go mano a mano with William Shakespeare,” said Hynes. “This project wouldn’t have happened at all if Mark O’Rowe hadn’t said yes to our invitation.”

Performed by Druid’s ensemble, the production has been cast along a “gender-blind basis”; the three kings of the cycle will be played by one man and two women. “Acting is first and foremost an act of imagination,” said Hynes. “That act of imagination transcends nationality, character, geography and background. We see no reason why it shouldn’t transcend gender too.”

Shakespeare’s kings have been performed by women before. Both Fiona Shaw and Cate Blanchett have played Richard II. Free from the expectations of English heritage drama, Druid’s project claims deliberate post-colonial liberties.

The event, modest entitled DruidShakespeare, can be viewed in the course of one day or split between two, Hynes said. In Galway, the dramatic action of the plays will spill out from Druid’s home at the Mick Lally Theatre and into the nearby 13th century building the Hall of the Red Earl. “There goes the neighbourhood,” Hynes added.

Writer O’Rowe admitted they would excise some scenes, speeches and characters that could “potentially bring the wrath of Shakespeare authorities down on our heads”. The stage Irishman MacMorris is not expected to make an appearance. Otherwise, O’Rowe is remaining faithful to the material. “It turned out, to my mind, to be a lot like sculpting, only with the most poetically dense and dramatically complex substance imaginable,” he said.

O’Rowe’s version maintains Shakespeare’s iambic pentameter, or blank verse. He underscored this point, perhaps unconsciously, by pre-empting his speech with a couplet: “I wrote something, it’s a bit flowery,/ Structure’s not really the best it could be.” It is widely thought that O’Rowe is the right man for the job.

Tickets for DruidShakespeare are available from druid.ie from Monday morning.

Duffy says she was ‘raped, drugged and held captive’
10