Unthinkable: When does a nudge become coercion? 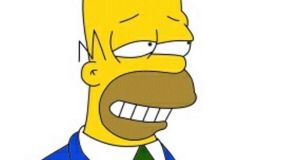 Homer Simpson: is there a bit of him in everyone?

US president Barack Obama last month signed an executive order directing federal agencies to incorporate behavioural science into their policies so that citizens would be given a “nudge” towards making decisions that are regarded as optimal from a societal viewpoint.

The classic example of such a nudge is framing a question as an opt-out rather than an opt-in. Cass R Sunstein, a former White House adviser who has done much to popularise the concept internationally, and who visits Dublin this week, cites the example of clean-energy plans in Germany. In cities where people had to opt out of clean-energy programmes rather than opt in, there was a tenfold increase in participation.

But when does nudging become coercion? Sunstein, a Harvard professor who has been invited by UCD to deliver the annual Garret FitzGerald lecture, rejects accusations of “nanny state” control. However, he believes there’s a bit of Homer Simpson in everyone, thus providing today’s idea (from the book Nudge, which he co-wrote): “As human beings, we all are susceptible to a wide array of routine biases that can lead to an equally wide array of embarrassing blunders.”

How does one evaluate whether a public policy nudge has democratic legitimacy?

Cass Sunstein: “Let’s begin with a definition. A nudge is an intervention that steers people in a certain direction while maintaining their freedom of choice. A GPS nudges. Public education campaigns, warnings, reminders and product labels are nudges. Fines, subsidies and jail sentences are not nudges.

“On legitimacy: the first question is whether a nudge is issued by a democratically legitimate institution. In the United States and many other nations, tobacco warnings have been compelled by the national legislature. Automatic enrolment in school meal programmes, helping poor children to get healthy food, has also been authorised by our congress.

“Many disclosure policies – designed to promote economic opportunity, to improve health, to save money and to reduce accidents on the highway – come from democratic institutions.

“The second question is whether the nudge is transparent and subject to public scrutiny. For the sake of legitimacy, it certainly should be.”

If a “nudge” is transparent does it reduce its effectiveness?

“No. Disclosure policies and warnings are perfectly transparent. If the government adopts some kind of automatic enrolment policy – say, to improve health or increase savings – nothing is hidden.

“Transparency is usually required. An information or education campaign can’t exactly work if it is hidden.

“A somewhat longer answer would acknowledge that some experiments are not entirely transparent. A ‘nudge unit’ – as it is sometimes called in the UK and the US – might want to know what kind of communication increases compliance with the law, or improves access to benefits, or helps people to avoid serious trouble. To do that, it might use what is called a ‘randomised controlled trial’, which means that it provides different communications to different, randomly chosen populations.

Do private companies, retailers and advertisers have a moral duty to be open and transparent about the way they manipulate consumers?

“A lot depends on the definition of manipulation. If a car company is trying to obtain customers by showing beautiful, elegantly dressed people smiling and flirting in their car, is it manipulating them? Maybe so. If so, is it failing to be open and transparent? Probably not; it sounds open enough.

“Private companies certainly have a duty not to engage in fraud or deception. But there are 50 shades of manipulation, and if you include those shades that you can find every hour on television, you might find that advertisers are being pretty open about what they’re doing.”

If a nudge produces unintended, negative consequences, who is responsible?

Those who designed the nudge or the people who allowed themselves to be nudged? “Maybe both. An advantage of nudges, on that count, is that they preserve people’s freedom of choice, so if government gets it wrong, there is an important safety valve.

“Mandates and bans are potentially a lot worse. But if nudges do have unintended bad questions, I’d hold the nudgers responsible, and ask them to try to do better.”

To what extent do we have free will?

Has your work in behavioural science influenced your response to this question? “The American philosopher John Rawls once wrote something like this: ‘We post a signpost: No deep thinking here. Things are bad enough already.’ That’s my basic answer.

“Nonetheless, it is true that behavioural scientists have shown that people are often influenced by small, subtle aspects of their environments, and they are often unaware of that fact. If a candy bar has a green wrapper, health-conscious consumers might be more likely to buy it, even if it is pretty unhealthy. If plates are big, we’ll eat more. Music, lighting and colours can nudge us in major ways.

“A frequent finding in behavioural science is that people don’t always know what has affected them. In fact, they will often deny being affected by something that really has driven their behaviour.

“In this light, it’s fair to say that we are often nudged without knowing it. But that’s a fairly narrow and wholly empirical proposition. Exercising my free will (I think), I would say that nothing in behavioural science undermines the belief in free will.” philosophy@irishtimes.com

Unthinkable: Great Ideas for Now by Joe Humphreys is available from Irish Times Books on www.irishtimes.com/irishtimesbooks

ASK A SAGE Question: Can pre-election promises be believed?

Homer Simpson replies: “It takes two to lie: one to lie and one to listen”