Unthinkable: Should children be encouraged to doubt? 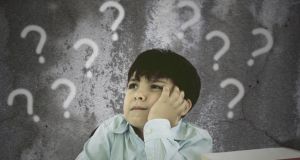 ‘We can’t hide from children that there are some things that are complicated.’ Photograph: Thinkstock

Plans are afoot to create a short course in philosophy in the new junior cycle, but even this modest reform faces barriers. A crowded curriculum, over-reliance on religious education and a general resistance to change will act as a brake on progress.

Already, voices can be heard suggesting philosophy is covered in the Leaving Cert RE syllabus – by virtue of Plato and Aristotle being name-checked in a module that deals primarily with religion’s quest for meaning. Others have argued that schools already cater for critical thinking through debating. Such views are misguided, according to Peter Worley co-founder the UK-based Philosophy Foundation.

Philosophy is about applying methods rather than just learning about traditions, says Worley, who is addressing the International Literature Festival Dublin this week. As for school debating, it teaches students how to win arguments rather than seek the truth.

At the opening of his book The If Machine: Philosophical Enquiry in the Classroom, he reproduces a quote of GWF Hegel, which provides today’s idea: “Education to independence demands that young people should be accustomed early to consult their own sense of propriety and their own reason.”

What is the best model of doing philosophy in schools?

“This will depend on the kind of thing you are aiming to do. In the Philosophy Foundation, we draw our concept of what philosophy is from the academic tradition. So if there are things that academics do which are recognised as philosophical features, we would ask is there a way of measuring how children can do these things too. The key thing would be critical thinking and whether or not that can be measured.”

And can it be measured?

“You can’t judge children’s answers on philosophical answers but you can assess whether their critical reasoning is improving. The model which schools would want to adopt is one where you can assess that kind of progress. Can we see children getting better at their critical thinking? Are they developing reasoning skills, an ability to construct arguments, an ability to spot fallacies in their own and others’ thinking?

“These are the sort of things that are going to be of great use and interest to schools, more so than a straightforward qualitative project where the kids have fun and enjoy themselves but you don’t have measurable changes.”

But would such assessment undermine the open-ended, non-judgmental spirit of philosophy?

“I think this is a classic misconception of how philosophy works. People often think because the questions are not easily answerable that therefore there are no right and wrong answers. What’s important in philosophy is that you can give good or bad answers; you can be consistent or logically flawed.”

Some parents might be uneasy at the idea of introducing doubt in their children’s lives. Don’t children need certainty?

“I don’t think that’s a given. Children are not fools. They are bright and switched on and will recognise answers given to them by teachers might not be the full story. So we can’t hide from children that there are some things that are complicated.

“Also, leaving school and getting involved in the real world will involve dealing with situations where the answer is not in the back of the book. It seems to me if we take a blanket view that children should be taught certainty, ‘end of story’, then we are misleading these children as to what the world is really like and, in fact, you will have to deceive them at some point because they are quite bright and they will ask questions.

“To some extent, we have to embrace the inconclusiveness of the world and of problems. And even if we don’t do so all the time in our curriculum, we should certainly have a space where children can explore those grey areas for themselves.

“Among the important outcomes we identify are not just critical thinking but the quality of resilience – the ability to deal with uncertainty – and various intellectual virtues, such as the ability to back down, the ability to recognise maybe your argument needs refining or maybe you need to rethink your position.

“Contrast, for instance, philosophy and debating. In debating, you are meant to hang on to your position no matter what and try to find a way of winning, in a House of Commons kind of way. What we are looking for is for a group of children to work together to try to find out what’s the truth.

“The practice of giving up my position because of what I think the truth is seems to me to be a good virtue to develop.”

Debating, then, is a poor substitute?

“Well, that’s what Socrates thought. It is why, 2,500 years ago, he said we need to get involved in thinking collaboratively, otherwise we are just entering into what the Sophists do: trying to use philosophy and reasoning to win arguments rather than seek the truth.”

Does teaching philosophy in religious-run schools lead to inevitable tension?

“There isn’t an inevitable conflict between religion and philosophy, but sometimes there is a conflict between faith and reason. For instance, it’s perfectly conceivable that somebody who believes in God also believes in science, in which case there doesn’t seem to be any great conflict. A conflict might arise if they believed in God or science, if they said it was either one or the other.

“But it seems to me the perfect thing to bring in to any institution which has that conflict is philosophy, because philosophy is one of the only subjects dedicated to dealing with seemingly intractable problems, ambiguities and incoherencies between things.”

Question: How do you spot sophistry?

WB Yeats replies: “Rhetoric is the will trying to do the work of the imagination.”