Unthinkable: Is rewiring the brain the answer to ethics? 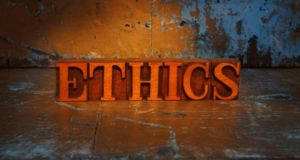 Traditionally, parents and priests have cornered the market on ethical advice. But is it time the professionals took over, specifically those scientists who are helping to explain just why people believe or behave the way they do?

Prof William T O’Connor, foundation professor of physiology at the University of Limerick Graduate Entry Medical School and author of the blog Inside the Brain, thinks neuroscience has a particularly useful role in advancing ethics.

“The physiology of our brains is a hangover from ancient times, when physical survival was everything, for acting before thinking. We are still walking around in the 21st century with the brains of ancient cave dwellers,” says O’Connor. Asking whether “a re-engineered human brain would do any better” than the current one, he provides today’s idea: “The responsible application of neuroscience should be represented in the teaching and learning of ethics in the classroom.”

What does research into the brain tell us about the origins of ethics?

“Ethical codes have arisen by evolution through the interplay of brain and culture, and every major world religion today is a winner in the struggle waged among cultures, and none ever flourished by tolerating its rivals. When two armies blessed by priests clash, one army still loses.

“The Darwinian basis for group selection argues that in the urges of the individual lies sin; in those of the group lie virtue. Yet we need both to survive, and evolution has endowed us with an intelligence high enough to judge and manipulate the tension generated by that dynamic relationship between co-operation and defection. Most agree that this is the primary origin of our ethical code.

“In fact, the study of perception, learning, memory and recall – the four major functions of the human brain – are converging to unite ethical and social thought with neuroscience (the scientific study of the brain) in the emerging field of neuroethics.”

Have we the ability now to ‘rewire’ brain circuits to change ethical behaviour?

“In looking at the way the brain is wired, neuroscience has removed some of the mystery of our feelings, particularly the compulsive ones. Furthermore, nerve circuits are called upon in the brain for various activities including impulse control – arguably the basic attribute of the moral person – thereby enabling us to plan, initiate, organise and, most importantly, inhibit certain behaviours.

In fact, neuroplasticity shows how the learning and the practice of these behaviours can cause discrete brain circuits to grow or change by adding a tiny fraction of the brain’s neural circuitry and eliminating old ones.

“Brain-imaging technologies are facilitating an unprecedented and rapidly developing ability to correlate nerve activity in these circuits with psychological states and traits, including attitudes towards particular ethnic groups and predilection for violent crime, and among people with brain disorders or damage due to stroke, tumours and disease.

“These findings are the basis of the remedial use of cyber therapy, whereby inducing the illusory ownership of a body of a difference race, age or gender (avatar embodiment) can alter the psychological/ cognitive functions produced by these brain circuits and thereby change ethical behaviour.”

Should we try to ‘rewire’ the human brain, then, to make it more ethical?

“As the tragic history of frontal lobotomy reminds us, permanent alteration of the brain cannot be taken lightly, and these new technologies may require a reconsideration of the ways in which we think about classical problems, for instance by generating genuinely new questions about free will and responsibility, such as when and how are we to ensure the privacy of our own minds; drug-induced mental enhancement, especially in soldiers; thought-based control of computers and robots by paralysed patients; and loss of personal identity following neurological treatments.

“While our rapidly expanding scientific understanding of the brain generates these new ethical questions, sometimes in sharp relief, it also helps to humanise ethics and provides us with better therapies, for instance by enabling people to improve their memory and attention using drugs, and in helping us communicate with comatose patients in a way that was not possible before.

“Perhaps, the question should be not how can humans build robots with a moral compass but rather, how can we build better ethical brains to ensure both self-preservation and that of our species.”

Can brain imaging techniques such as fMRI unlock the answer to questions about consciousness and free will?

“Brain imaging technologies including fMRI, which can observe localised changes in brain activity, generate genuinely new issues about free will and responsibility, such as when and how are we are to ensure the privacy of our own minds, drug-induced mental enhancement, thought-based control of computers and robots, and changes in personal identity following neurosurgery.

The jury is out on whether these techniques will unlock the answer to questions around consciousness and free will. “Just as the garage mechanic understands driving in terms of spark plugs, pistons and hydraulics, it may be necessary to zoom out from the molecular level to fully understand human consciousness and free will. Thus – in much the same way as the driving instructor understands the importance of awareness, road holding, and obeying the rules of the road – the challenge of living ethically may cease to be technological, defaulting instead to the nature of man and the quest for self-control and by emphasising the worth and dignity of hard work.”