What, if any, responsibilities go along with the freedom to research? 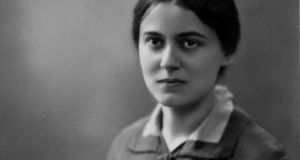 Edith Stein: believed there is an important link between empathy and knowledge

In the headlong rush to embrace the “knowledge economy”, there has been little reflection on the potential pitfalls of innovation. Exactly what kind of knowledge are we seeking to acquire, develop or disseminate? Minister for Jobs Richard Bruton believes “an innovation revolution” is key to Ireland’s recovery. But does “new” always mean “better”? We ask Gabriel J Costello, a lecturer in mechanical/ industrial engineering at Galway Mayo-Institute of Technology who also researches the ethics of innovation.

Is innovation always good? A review of innovation definitions over the last 50 years indicates that technological innovation is almost exclusively researched without reference to ethics. As a result, any innovation is often assumed to be good, which is problematic, when you consider the case of an innovative landmine. The Enron Corporation, notorious for fraud and corruption, was named by Fortune magazine as the US’s most innovative company for six consecutive years.

You’ve written about how phenomenology, the branch of philosophy associated with Edmund Husserl and Martin Heidegger, has contributed to our understanding of technology. In what way? Heidegger argued that our knowledge and basic ways of encountering the world are obtained through the use of technology rather than by means of its scientific description. What’s important is how we experience technology, often unconsciously. [This view] was maybe a bit of a reaction to a very instrumental mindset that was associated with the industrial and scientific revolution.

Another philosopher, Maurice Merleau-Ponty, took the example of water: in the scientific world we would look at water as two atoms of hydrogen combined with one atom of oxygen. Merleau-Ponty would say we had to experience water as something to taste, to drink, to wash ourselves with.

What do philosophers say to us about the ethics of innovation? Emmanuel Levinas (1906-1995) made a significant contribution to the discussion of the ethics of technological innovation, as he gave phenomenology a radical ethical orientation. His philosophy has been described as consisting of one simple but profound theme: that western philosophy has consistently practised a suppression of “the other”. His major work Totality and Infinity explored such themes as time death, and relations with others. Increasingly, his philosophy was concerned with marking out an ethical “face-to-face” with “the other”.

Audio: Gabriel Costello on the ethics of innovation

Another useful philosopher in this context is Edith Stein. She analysed empathy in the context of the complete psycho-physical-spiritual person. She also argued that there is an important link between empathy and knowledge. However, in this age of avatars and the internet, there is much work to be done on examining the implications for empathy from virtual worlds and social networks.

What about current thinking in the field? In her research at Harvard, Dorothy Leonard proposes emphatic design as the best method to import knowledge from the marketplace. Empathic design is the creation of product or service concepts based on a deep (empathic) understanding of unarticulated user needs. This invites us to look at the “bigger picture” and consider its implications for technological innovation.

There is a view, however, that researchers should be free to make discoveries without having to second-guess the ethical implications of their work. Shouldn’t they be granted that licence? I disagree. Basic research requires a lot of academic freedom. With such freedom there is academic responsibility. How your technology is used is important. If somebody invented a new landmine and it was exceptional technology, it would be accepted under a lot of the innovation definitions as a very good innovation. But I think, generally speaking, everyone in the civilised world would agree that a landmine is a very grotesque piece of technology.

Are you responsible for an innovation that is used for harm if you didn’t foresee such a use? I believe there are three parts to the answer. If someone develops an innovation for a good purpose, for example a hammer, and it is subsequently used to do harm, the inventor is in no way responsible.

This, I argue, is consistent with the philosophical concept of “common sense”, or sensus communis, which originated with Aristotle and was utilised by such disparate thinkers as Medieval Scholastics and the Scottish Enlightenment.

If someone invents something for the purpose of some good, for example self-defence, and it causes serious harm as an unintended side-effect, then such an innovation is permissible. This is known as the principle of “double effect” which is credited to St Thomas Aquinas but is still much debated in ethical discourse today.

If someone develops an innovation that will result in the foreseeable death or maiming of the innocent, for example landmines or nerve gas, then I would argue that they share moral responsibility for such destruction. The philosopher I would quote to back this up is Levinas, who consistently points out “my responsibility to the other”.

Question When I start fights and abuse people online, am I to blame or is the technology?

Nelson Mandela replies “People must learn to hate, and if they can learn to hate, they can be taught to love, for love comes more naturally to the human heart than its opposite.”