Unthinkable: Could philosophy in the community aid Ireland’s recovery?

The pub is ‘an unrivalled space for civic discussion’, but discussion must lead to action, says an Inishowen community activist 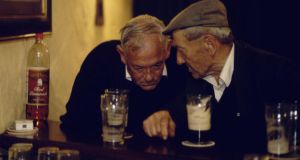 Sometimes dismissed as a niche activity in Ireland, philosophy has traditionally been associated with monks and seminarians. Or those who didn’t quite get the points of science.

But this mis-categorises the discipline, says Brendan Flanagan, a Co Donegal community activist who believes philosophy can be done – an d is be ing done – in pockets of civil society across Ireland. As in Plato’s day, he sees a role for debating over a drink, and the Inishowen Civic Forum, which he helped to found, has held a number of meetings on the peninsula to demonstrate in practical terms that philosophising is not just for ivory towers.

Arguing that the pub is “an unrivalled space for civic discussion”, Flanagan – a retired Met Éireann employee who has also been involved in adult education and job-creation initiatives – provides today’s idea: Ireland needs to develop its own civic philosophy.


Can philosophy take place in local communities?
Brendan Flanagan: “Yes, and it does. For philosophy to take place at a community level it requires disposables of both income and time.

“Ironically, a feature of economic recession, where there is a welfare safety net, is that reflective people engage in collective philosophising. These people, experienced in formal and existential education, have time to think and ruminate on matters beyond the immediate.

“Ireland currently enjoys the most highly educated population in its history and therefore the best equipped for philosophical analysis of current problems and issues. It is ironic then that this phenomenon is also accompanied by the highest levels of anomie, of alienation. This is evidenced in electoral indifference, opinionated egoism, failure to educate for empowerment, the erosion of civic equality.

“Those who take time to reflect become ever more detached from civic society as they feel powerless to change what they conclude needs changing.”


What do you mean when you say Ireland lacks a civic philosophy?
“We do not have a positive shared vision for the future of our society. We lack a shared conceptual map to provide us with intellectual coherence for our future. We do not have an open civic dialogue emanating from the citizens.

“The agenda for civic dialogue is set by the elites in Irish politics and by all institutional civic agencies rather than with the collaboration of the people.

“For instance, Government policy is decided behind the closed doors of party rooms from which the public or their media are excluded. Only then is it subjected to the cursory scrutiny of parliament. The bulk of citizens have no role in the selection of candidates for public office, only in their election.

“A true democracy is marked by shared power, shared knowledge, shared respect, and the existence of a viable alternative administration having a differentiated philosophy.”


How might this be achieved?
“Through reaching a broad consensus on both a definition of what we understand by ‘civic society’ and a determination on how to develop it. Traditionally, civic society was understood as the public engagement of citizens in public affairs relating to government, distribution and separation of powers, the legitimation of the use of force, etc, all with a view to promoting civic virtue.

“Today, technology has redefined the ‘public space’ and what constitutes ‘civic affairs’. Civic society must then be re-defined to include the public implications of solitary actions, of media monologues, and of the atomisation of society through the abandonment of former places of civic dialogue such as the public house – an unrivalled space for civic discussion, particularly in rural society.

“When a consensus is reached on what constitutes civic society the formal and informal pedagogical agencies have a duty to identify and deliberate on the philosophical options by which our society will be guided with a view to action. Talking will not, of itself, provide rational orientation for society. If it did, every pub in Ireland would be a fountain of civic innovation.”


It is often said Irish people are anti-intellectual; do you agree?
“No, Irish people’s capacity for reasoning from common-sense premises is vigorous. However, common sense, being a knowledge of the particular is, by definition, limiting.

“The Irish, though not lacking in ability to think in the abstract in the sciences or the arts, are seriously deficient in abstract speculation in civic affairs where, generally, we emulate rather than innovate. We are timid about ideology, regarding it as a form of egoism, and are afraid of the speculative freedom it offers.”

Do we need to rethink our definition of Irishness?
“Irishness is a dynamic consensus on our uniqueness, ever changing as the tides of race, technology, environment and climate ebb and flow. It is a consensus defined by us and by others sometimes with a view to realism, sometimes with an agenda of subjugation. In general, ‘Irishness’ does not embrace civic space unless that space is a public house . . .

“Were the civic consensus to be restored we would no longer be derogatory about ‘Irish solutions to Irish problems’ but would expect no other alternative.”

NUI Galway is hosting a roundtable discussion open to the public this evening on the role of the university in the contemporary development of citizens , as part of the Sociological Association of Ireland Postgraduate Conference 2014
( sociology.ie ) . The dialogue takes place 7 pm - 9 pm in The Ruby Room, The Kings Head, High Street, Galway

Question: Should I believe in what’s true or what’s comforting?


Epicurus replies: The words of that philosopher who offers no therapy for human suffering are empty and vain.