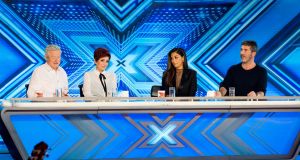 Louis Walsh, Sharon Osbourne, Nicole Scherzinger and Simon Cowell are at teh helm of this year’s X-Factor. Photograph: Syco/Thames TV/PA

It turns out that rumours of its death were greatly exaggerated. The X Factor returns to a screen near you on Saturday.

They joined dark lord Cowell and former girl-bander and serial matrimonialist Cheryl Fernandez-Versini (now just plain Cheryl, which is cheaper at the tattooist) on the panel.

“I was sacked and it was fine,” 64-year-old Mayo man Walsh told the Telegraph this week. Walsh took it like a man, as he had done in 2007 when Cowell had decided to make the show “edgier” and first jettisoned him. It is the Kiltimagh way.

Assuming that Walsh is a Beatles fan, he seems determined that X Factor viewers will discover they still need him now he’s 64. Maybe Cowell has finally accepted that no one watches the X Factor for “edge”. Not when they can get edge by the bucket load as people hurl sponges at the tent wall in the Great British Bake Off.

With the edge-mythology dead and buried, it is high time to ask: what has the X Factor ever done for us? Apart from give us JLS, Alexandra Burke, Leona, One Direction, Little Mix and the dreamy Rylan Clark of course?

So this year, all semblances of getting down and dirty have been abandoned in favour of good old-fashioned family entertainment. After all, no one wants their teenage son knee deep in bump and grind at 8 o’clock on a Saturday evening (unless he’s not sitting next to you on the sofa, of course).

Ironically, Cowell has taken flack from all-comers. From the “she’s hardly wearing anything” brigade to holier-than-thou music aficionados still hooked on vinyl.

Walsh is still defending his master, though. Asked whether Cowell is guilty as charged of destroying music and churning out bland McSingers. Walsh said: “It sells. Simon always knows what will sell.”

He sure does. That is probably why he has done us all a favour by rehiring the imperious Sharon Osbourne and our favourite yoghurt-seller and “hot” former Pussycat Doll Nicole Scherzinger. Now there are two women we can all get behind.

And you can prepare for vitriol. Not just from Queen of Darkness Osbourne but also from Prince Charming Walsh.

Walsh said this week that “Katy Perry, Britney, Kylie don’t have “a lot of talent” and that “J.Lo cannot sing, but she’s still selling out Vegas”. Saucer of X Factor milk for Mr Walsh.

He went on to say ... and write this down, prospective pop stars... that X Factor winners “don’t realise they’re only at the start of their careers. They think: ‘Ooh, I’ve all these Twitter followers, job done’. But it’s not about that, it’s about where you’ll be in two years. Are you prepared to put in the hours?

“You can always spot the professionals,” he told the Telegraph. “Taylor Swift, she knows what she’s doing. Gary Barlow [of Take That] used to say to me: ’They don’t realise it’s hard work, it’s hard to be Gary Barlow’.”

It may also be hard to be Louis Walsh or Sharon Osbourne or Nicole Scherzinger or even Simon Cowell, but they will probably make the X Factor look easy.

After all, this year the pretence has been ended. It really is all about the base instincts of the judges. We always knew it was. Let the games begin.

The X Factor is on TV3 on Saturday at 8pm