Twenty years on – could the ‘Irish Press’ have been saved?

Journalist’s sacking in May 1995 led to a lock-in; the newspapers never returned

May 25th 1995 was the last day the presses rolled at Irish Press Newspapers. That day journalists outraged at the sacking of colleague Colm Rapple, began a protest which evolved into a 5 day occupation of the newspaper’s offices. Video: Bryan O'Brien 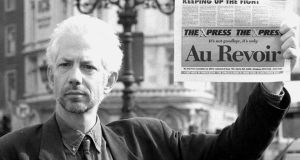 Enda O’Doherty, a subeditor at the ‘Irish Press’ group, giving out the final issue of the XPress – the publication produced by NUJ members during the dispute. Photograph: Jack McManus/The Irish Times 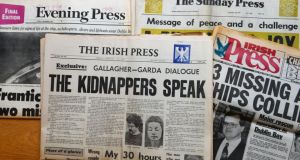 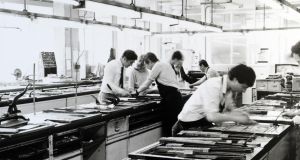 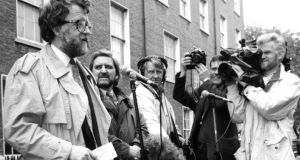 ‘Irish Press’ journalist Colm Rapple addresses a rally outside Leinster House, which later moved to Burgh Quay where 20 of his colleagues, who had staged a sit-in protest over his dismissal, finally ended their occupation. Photograph: Matt Kavanagh/The Irish Times

A hundred metres down the street from Denis O’Brien’s Communicorp headquarters is a small brass plaque reading “Irish Press plc”. It is a humble reminder of a once proud newspaper group whose presses last rolled 20 years ago this month.

Six hundred staff were laid off in circumstances which still rankle today, not least because the company’s management remained in situ – and continued to be remunerated – after the collapse of the three titles, the Irish Press, Evening Press and Sunday Press.

In the small office behind the plaque on Dublin’s Clanwilliam Terrace is Dr Eamon de Valera, former editor in chief of the newspapers and ongoing custodian of the shareholding which his grandfather, the former president, once held in the enterprise. Set up in 1931 as a nationalist alternative to existing titles, the Irish Press promised “to give the truth in the news” but in time became synonymous with an Ireland past, just as Denis O’Brien’s empire 12 doors away is bound up with an Ireland of the future.

“I would pinpoint the start of the decline as Éamon de Valera’s death in 1975; it was the end of an era in Irish life,” says Ray Burke, who was news editor of the Irish Press at the time of its closure.

Burke, who is now chief news editor at RTÉ, wrote a book about the collapse of the titles called Press Delete 10 years ago. While the printing presses stopped on Thursday, May 25th, 1995 because of a crisis surrounding the sacking of then business editor Colm Rapple, the reasons for the closure were much more complex, he says.

“There was a failure to reinvest, failure to bring in new management blood, and just bad management; and arising from that very bad and deteriorating union relations.

“You had the commercial side weakening, and increasing competition from The Irish Times in the morning. The Irish Independent was very strong editorially under Vinny Doyle, and commercially under Tony O’Reilly.

“The Irish Press was just getting weaker and weaker for all those reasons. It was like a very slowly sinking ship.”

He adds “the key determinant in the closure” in 1995 was a Supreme Court ruling on the same day as Rapple’s sacking which added another £4 million to the debt of Irish Press Newspapers (IPN).

Those 48 hours are still etched in the memory of former workers at the titles. On May 24th 1995, The Irish Times published an article by Rapple as part of a series this newspaper was running on media ownership. In the piece, Rapple suggested the Press group should reform its shareholding so that staff were given a stake in the company.

The next morning the journalist was called to a meeting by Dr de Valera and chief executive Vincent Jennings, where he was sacked.

Disloyalty was cited as grounds for his dismissal, prompting his journalistic colleagues to down-tools and stage a mandatory union meeting.

That same day, the management duo went to the Supreme Court to hear that a £6 million High Court award for damages against US business partner Ralph Ingersoll had been overturned. The money would have bought IPN some more time as the company was now losing £300,000 a month, and had £19 million in debts.

Back on Burgh Quay, the Irish Press chapel of the National Union of Journalists (NUJ) demanded Rapple’s reinstatement but with no movement from management members refused to return to work. No paper was brought out the following day, and they would never appear again.

While the journalists were blamed in some quarters initially, former father of the chapel (union branch head) Ronan Quinlan says “whoever claims the industrial dispute closed the Press does not know what they are talking about or else are being vexatious”.

Siptu, which represented 250 workers in administrative departments, was less enthusiastic about this stance. Its officials said Rapple might have been more diplomatic, and argued that the journalists should have worked under protest.

The tensions deepened as management sought to liquidate the company. The NUJ chapel, independent of head office and without the other unions’ backing, secured an examinership with a view to finding a new investor. In contrast, Siptu lobbied the government for State investment, which the NUJ dismissed as unrealistic.

“There was always a certain elitism – I don’t mean that in an offensive way – from the NUJ to the rest of the unions,” recalls former Siptu stalwart John Kane.

“All of the unions outside of the NUJ were just standing on the sidelines, and powerless to it, and eventually when it did go we were concerned to maximise the pension responsibilities and redundancy payments because people with huge service got very little in the end.”

Whatever about such internal strife, the workers had the same opinion of who to blame. “There was a certain cynicism among our staff about the ability of management to run the place even before the crisis blew up,” says Kane.

Asked if the NUJ chapel was militant, Burke says he would not dispute the description “but it takes two to tango. I think the unions and the management were equally guilty of not getting on with one another”.

The unions were “not maverick and not unrealistic” but they “were of their time,” says Burke, who edited the workers’ protest paper the X Press during the dispute.

A key question that lingers today is could the examinership have worked? A team of Irish-American investors had offered a rescue fund but they pulled out of talks in August 1995, claiming they couldn’t proceed without the support of Irish Press shareholders.

Quinlan said a precondition of any investment was that Jennings and de Valera would step down “but they would not go”. This has been denied by the company.

Speaking to The Irish Times this week, Dr de Valera said “the examiner never made any proposals to us”.

The company had “friendly discussions” with a representative for the Irish-Americans “and at no time did I seek to block his clients”.

The unusual structure of Irish Press plc was often cited as an obstacle to a deal. The debts were held by the operating company IPN and the titles by a sister company, while the parent company was almost wholly owned by Dr de Valera.

Asked would he have been willing to surrender his shareholding in Irish Press plc to save the titles, Dr de Valera replied: “This simply did not arise. In 1994 we made it quite clear that Irish Press plc was prepared to divest all its interests in the newspaper subsidiaries in order to preserve their future provided the purchaser was funded, committed to the newspapers and prepared to pay a fair economic price to the parent.

“In fact we entered into discussions with a potential purchaser in 1994 on this basis.“Because the control and ownership of the newspapers which Irish Press Plc had was subject to the Supreme Court appeal by Ingersoll, no agreement could be completed until judgment was delivered. This effectively tied me and Irish Press plc in until the legal and contractual issues with Ingersoll were finally resolved.”

Burke believes the shareholding structure “would have been a factor in deterring investors.” However, he says: “It’s futile talk now because a new investor would have had to revolutionise the management, work practices, machinery, marketing, and you are looking at 1995 when the internet was going to make life much, much more difficult for all newspapers, even healthy newspapers.

“There is no place for sentiment in the newspaper business any more.”

After the collapse, many of the journalists found a home in other media organisations, and Kane says “most of our people seem to have got some work”, although those aged in their 50s were “hurt badly”.

Jennings died in 2010, Rapple in January 2015. But Irish Press plc continues to soldier on, having liquidated IPN. The company acquired Thom’s Directory, bought and then sold a stake in Tipp FM, and has most recently branched into online and print marketing for medical and health care companies.

Dr de Valera held 464,359 shares in the company at the end of December 2012, while the three other directors held 1,181 shares together. In their directors’ report, they say “there is significant uncertainty as to whether the company and its trading subsidiaries can continue to trade for the foreseeable future”.

Dr de Valera told The Irish Times the balance sheet position had since improved, and the business was now both “profitable” and “viable”.

As for the prospect of re-entering the newspaper business, he said, “we examined the possibility of selling or relaunching a title some years ago but nothing was progressed. Realistically there is no prospect of these titles being revived.”