Celebrities dressed in multi-coloured onesies being hurtled to their potential death? Channel 4’s winter-sports reality show really should be more fun than this 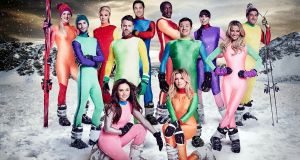 The contestants on The Jump 2016. Photograph: Channel 4 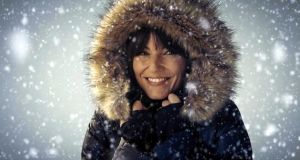 In The Jump (Sunday, Channel 4) Davina McCall oversees the jettisoning of excess celebrities from an Austrian mountain. It has come to this. We have so many surplus famous people that we must now cast them from cliffs at great expense to the taxpayer.

“But wait,” says a wise producer. “Let’s put cameras on their heads and have Davina McCall interview their quivering bodies before and afterwards.”

Three seasons in, we know the drill. McCall wears mittens, for she has contracted “baby hand syndrome” (editor’s note: this is not a real illness). She also wears camouflage-print ski gear. This is useless in the snow, but is perfectly suited to sneaking up on people in the quiet wet English country side, which is Davina’s hobby when she is not on television. All in all, she is terrible to behold.

Luckily there are other people in Davina McCall’s mountainside court. There’s an oompah band in lederhosen (the band of the damned) and there is the mayor of the town of Kühtai (seriously) who prostates himself before Davina McCall so she will spare the lives of the conquered townsfolk. There is also Eddie the Eagle Edwards who, his spirit broken, will do an “eagle dance” and make a strange cawing sound when instructed to by Davina McCall.

She laughs with delight.

But who are the contestants, drinking mulled wine and guffawing while dressed like demented toddlers in multi-coloured onesies?

There’s Sid Owen, aka Rickaaaay from Eastenders. He is wearing a furry black waistcoat and green fluorescent tights.

He looks like a camp version of Ghengis Khan (from a Ghengis Khan musical maybe – Ghengis, Yes I Khan). He grins charmingly before the minions of McCall propel him at speed through an iced metal tube.

“Arg” from The Only Way is Essex is a large, likeable Essex Moomin in tight pants. “Arg” is an abbreviation of his actual name, which is “Argh!” – the word uttered by the midwife at the moment of his birth. “Argh!” says Arg with delight while being flung through the snowy air at a large inflatable mattress.

Mother Nature is cruel
Sarah Harding from Girls Aloud is here too. Girls Aloud, you may remember, was the nest from which Cheryl Tweedy/Cole/ Fernandez-Versini (she has many names) hatched.

According to the laws of nature, Harding, like the other Girls Aloud, should have been killed and eaten by the fledgling Cheryl in order to sustain her through that first tough winter (Mother Nature is cruel). Harding survived this. And now Davina McCall is going to throw her off a mountain.

Tina Hobley from Holby City, after which she is misspelled, makes growling sounds when being slung along an ice slide on a tray. Her arch enemy is Tamara Beckwith, who is, she tells us, “a girl about town”.

There are cave paintings featuring Tamara Beckwith being “a girl about town”. She must have a portrait in the attic. Right behind a massive industrial box of Botox. McCall will throw the box, the portrait and Beckwith from the mountain before she’s done.

Speaking of Oscar Wilde, Mark Francis from Made in Chelsea does a good impression of someone who pretends to be Oscar Wilde at parties. He can do almost everything Oscar Wilde can do. He can raise an eyebrow, hold a wine glass in a nonchalant manner and laugh dismissively, all before being fired at 90 miles an hour through a tunnel of ice. Just like Oscar Wilde.

Dean Cain once played Superman on telly but the announcer doesn’t understand the concept of fiction. “Is this going to be his kryptonite?” he asks as Cain plummets down a death slide.

“He’s not really Superman!” I shout at the television.

“Is it a bird? Is it a plane? No it’s Dean Cain,” says the announcer as Dean Cain is thrown across the night sky.

“He’s not really Superman!” I shout at the television.

Rebecca Adlington, Linford Christie and Beth Tweddle are all actual champions of swimming pool, track and gymnasium. But they feel empty inside. They feel empty inside because they have not been made feel fear by Davina McCall and her Channel 4 goons in the Austrian ice. This will change.

Indeed, Rebecca Adlington is soon in an ambulance, crying (she dislocated her shoulder). McCall sympathises “SKREEEEEE!” she says soothingly, flapping her pterodactyl wings.

There’s no “I” in team. And once there was no “I” in Bryan McFadden, but when the enchanted Playmobil man escaped from the clutches of Westlife in order to become a real boy, he changed his name to Brian.

So now there is an “I” in Brian McFadden and he can recognise himself in mirrors and do all the other things associated with the higher apes. He has, as he once dreamed, achieved self-awareness. Just in time for Davina McCall to fling him screaming through the snow.

Survival of the iBrian
iBrian survives his ordeal (this time). In this episode, it is alliterative Louisa Lytton from Eastenders who is the worst at hurtling through the ice and so she is ejected from the programme.

“[That was] the most terrifying two weeks of my life,” she says. Off screen, McCall opens her wings and prepares to consume her soul.

Instead we just get people we vaguely (very vaguely) recognise earnestly doing things at which they are inept, as Davina McCall watches them hungrily from her icy perch.

And yes, we all know where it’s heading, that final episode where McCall crouches in the snow, rifling through celebrity corpses for their trinkets and gold before taking to the air, a sheep in her mouth, and returning to her lair in Fire Mountain. It’s all so drearily predictable.

The Invisible Man review: Tenser than Christmas at the in-laws’
9