TV Review: Gillian Anderson is fired up in ‘The Fall’, but Mr Whicher is getting suspiciously dull 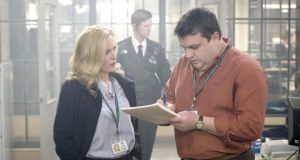 Prime suspense: Gillian Anderson as DCI Gibson and Simon Delaney as McElroy in The Fall

I can’t be only one who locked up the house a little more securely on Sunday night after the tense first episode of The Fall (RTÉ One, and BBC One, Monday). It was the sight of the murderer sliding silently in through the kitchen window of the ordinary suburban house before heading upstairs to prep for his murder that did it. He was pretty ordinary, too, for a serial killer: a family man, very handsome, two kids, married to a nurse, works as a bereavement counsellor. And that was one thing different about the new Belfast-set crime drama: it’s not a whodunnit.

Paul Spector (played by Jamie Dornan) did it, and unless he’s stopped by DSI Stella Gibson (Gillian Anderson with a flawless, clipped English accent) he’ll do it again. Sent over from London to sort the local police out, she immediately spotted a pattern: a serial killer is on the loose. So that was the tension set up for the five-part series. The scenes of him getting ready to go out on his mission were intercut with shots of Gibson getting ready in her London flat to head to Belfast; that sense of parallel lives ran throughout. He hunted his prey and exercised his power; she spied a fit-looking officer at a crime scene whom she all but ordered back to her hotel room.

I’m not sure that the intercutting of the parallel worlds won’t get too stretched to be believable as the episodes go on. Anderson is fantastic as an updated version of DI Jane Tennison, Helen Mirren’s detective in Prime Suspect : in her head she’s the boss but in reality she isn’t, as testy scenes with her real boss, political operator AAC Jim Burns (John Lynch), showed. And it wasn’t set in a random regional British city: this was definitely, intelligently and subtly Belfast. On her first day in a PSNI station she passed a large photomontage of dead police officers. Later, passing a police tape, she was told it was a drugs bust; she asked if there were any explosives. And when Spector counselled a couple who donated their dead toddler’s organs, the father angrily told him that he didn’t want his son’s heart beating “in a Taig’s body”.

The filming and editing felt clean and modern, Belfast felt urban and grey, and – this is rare – Jakob Verbruggen, the director, showed his confidence in Allan Cubitt’s script by having no extraneous mood-setting music. The grisly twist at the end of episode one was satisfyingly surprising. The police looked as if they were going to arrive in the nick of time to save the next victim, but they didn’t. I’ll be watching tomorrow.


Body count
At the start of the year I made a mental note to count the number of dead women’s mutilated bodies I see in various states of undress in the course of an evening’s TV watching. It’s only May and I’ve lost count.

The first The Suspicions of Mr Whicher (UTV, Sunday), in 2011, told a true story very well. Whicher was a Victorian policeman in London who solved a high-profile murder that kick-started his career as a private detective. He was so famous that both Wilkie Collins and Charles Dickens created Whicher-inspired characters.

Paddy Considine played him in the original feature-length drama; now, maybe because the bloody but atmospheric Victorian-era Ripper Street was such a success, a new Whicher yarn, The Murder in Angel Lane , was commissioned.

Considine was back in scratchy period clothes and not quite mutton-chop sideburns for the two-hour drama. The whodunnit, involving a young girl found dead on the streets, was on the wrong side of tedious. The script was too convoluted, erring on the gothic in its dark complexity: sibling rivalry, a secret pregnancy, sinister goings-on in a lunatic asylum and police corruption. I can’t believe anyone cared what happened after the first hour. It was all too drawn out.

On the first outing Considine played Whicher as a cross between Columbo and Morse, but in The Murder in Angel Lane he looked so bored by the script and the general gloom in every scene that he didn’t change his fixed, worried stare. And it starred Olivia Colman as the aunt, or maybe the mother, of the dead girl – another reason to watch – but in her bustle and bonnet she didn’t have much to do characterwise, and did even less.

It was far better to nip over to Graham Norton and the British Academy Television Awards (BBC One, Sunday) – easily done, as there were so many ads in Whicher – to see Colman, the actor of the moment, pick up two awards. One was a well-deserved best-supporting-actress award for her role as the mother of a murdered son in the BBC’s bleak Accused . The other was as best female in a comedy for her role in the BBC’s Twenty Twelve – not so sure about that one, as she’s played a plain Jane in love with the boss so many times she could have done it in her sleep.


Lights, camera, auction
Channel 4’s Four Rooms was one of the most innovative formats for a long time: people try to flog what they consider a valuable collectable for a top price to one of four flinty-eyed, flamboyant dealers. It’s back this week for a new run with less dramatic dealers – and, puzzlingly, in a lunchtime slot. One of its original stars, a London modern art and antiques dealer named Andrew Lamberty – not superposh but a not a wide boy, either – was snapped up by the BBC for the three-part Auction Hero (BBC Two, Monday-Wednesday).

The idea was that he would buy and sell various objects that he found in markets and auctions, from the south of France to Suffolk, with any profit going to volunteer-run charities. Basically he was doing his day job for charity – and the cameras. It was entertaining seeing him wheeling and dealing, noticing how much profit he can make on a single deal, and how his business depends on his network of fabulously rich buyers whose taste – and budgets – he knows.

At times, though, it suffered from the same rich-folk-poor-folk problem as Secret Millionaire . Wheeling and dealing in Belgravia was fascinating to watch, but there was always the niggling feeling that, if these people have so much money, why can’t they watch the video we were shown about the daycare centre for people with dementia, or the struggling food bank, and, rather than appear on telly, just pony up the cash? Instead of paying nearly £1,000, as one of Lamberty’s clients did, for a stuffed dog in a glass case, which no one actually needs, just donate the money.