A famous five aims to get in shape and, if that doesn’t make you breathless, dishy Ross Poldark is back 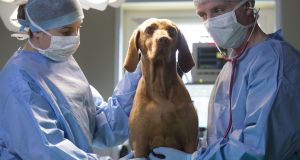 Poldark
Sunday, BBC One, 9pm
Well-hung hunk alert: Ross Poldark is back, and he’s facing the gallows in the new series of Poldark. Aidan Turner stars as the brooding, handsome hero who is trying to rebuild his family estate and regain control over his family’s mining business. The first series – a remake of the original 1970s series – was a huge success, and has made a star of Dublin-born Turner. He’s even been tipped to be the next James Bond. But back to the 18th century, and Ross is accused of murder and facing the hangman’s noose. Will he be saved from the gallows pole? A million women will be waiting breathlessly for the outcome.

Roald Dahl’s Most Marvellous Book
Sunday, Channel 4, 6.30pm
What’s the best Roald Dahl book ever? Tough one, isn’t it? How can you choose between such classics as Matilda, The BFG, The Witches and Charlie and the Chocolate Factory? Well, viewers will be asked to make a choice on Roald Dahl’s Most Marvellous Book. David Walliams – the 21st-century Dahl – will host this special programme to mark the 100th anniversary of Dahl’s birth, celebrating the writer’s 10 best-selling children’s books and ending with a live viewers’ vote.

Pet Surgeon
Tuesday, RTÉ One, 8.30pm
If your pet got sick, would you pull out all the stops to bring it back to health? Of course you would. Pet Surgeon is a new series that takes you behind the scenes at Gilabbey Veterinary Hospital in Cork, and watches as a parade of pets are brought in by their distraught, anxious owners to be treated. The first episode features Japanese Chin pup Noodle, who has sustained a spinal injury. Can vet Shane Guerin and his team perform the delicate operation needed to save the little tyke’s life?

Celebrity Operation Transformation
Wednesday, RTÉ One, 9.35pm
Right, you’ve binged out all summer on Cornettos and prosecco – now it’s time to lose the beached-whale body and get lean and mean this autumn. Amazingly, even celebrities overdo it a bit, so it was inevitable they’d get their own get-fit series. Celebrity Operation Transformation is a spin-off of Ireland’s ever-popular health and fitness drive, and features a famous five on a mission to fight the flab. Comedians Katherine Lynch and Karl Spain, broadcasters Elaine Crowley and Brenda Donoghue, and solicitor Gerald Keane have all signed up to lead the nation to better health by changing their eating and exercise habits, and throwing away cigars, takeaways, crisps and red wine. Each celebrity will be encouraging their followers in TV viewer-land to lose weight, and leading by example.

Making it Down Under
Wednesday, RTÉ One, 8.30pm
When the going gets tough, the tough head Down Under. Irish people have been emigrating to Australia for generations, looking to build a new life away from the bad weather and even worse economy. Making it Down Under profiles some of the Irish expats who are doing challenging work in their adopted home. We meet equine vet John Russell from Downpatrick, who is based in Melbourne and treats Australia’s top racehorses; Con O’Sullivan from Cork, who drives the world’s biggest cattle road train around Western Australia; and flying medic Matthew Mulqueen from Mayo, who flies a rapid response helicopter in Queensland. I’m packing my bags – where’s my flying licence?