The shows that changed television forever 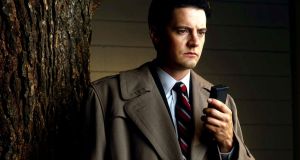 Have yourself a damn fine cup of coffee – Twin Peaks is returning next Tuesday (Sky Atlantic). Since genius film-director David Lynch first went slumming it in television drama in 1990, TV series about the dark underbelly of clean-cut America have become commonplace, as have long story arcs that don’t necessarily know where they’re going, as have programmes about the paranormal, as have disturbed weirdo protagonists. Twin Peaks had an influence is what I’m saying, and here are some more of the most influential television programmes ever.

Hancock’s Half Hour
First on radio, and then on television, writers Ray Galton and Alan Simpson designed the 20th-century British sitcom: a world-weary everyman with notions (Tony Hancock) is dramatically buffered by a naive idiot (Bill Kerr) and an amoral old crank (Sid James).

This blueprint served TV culture well from Only Fools and Horses to Father Ted to the classic cast of Top Gear to successive government front benches.

M*A*S*H
This Alan Alda fronted spin-off of the 1970 film about a Korean War field hospital ran for eight years longer than the war it depicted (sadly for historians, M*A*S*H, rather than fact, is canon now).

It was an early taste of the kind of lightly comedic dramedy that has come into vogue more recently and it acclimatised people to the idea of charming medics exchanging sexy bants over a gaping chest wound (see: every medical drama since). Also, it featured Alan Alda who is a goddamned international treasure and should be in everything.

Synopsis: an elderly gentleman introduces the new Irish national television station by grumpily warning against the dangers of that same television station. This was pretty meta, self-conscious stuff by the standards of the time. Dev was shrewdly foreshadowing Statler and Waldorf on The Muppets, Mystery Science Theatre 3000, a 21st-century culture of “hot takes” and anyone who comments disparagingly beneath this article.

The Late Late Show
Prior to this eclectic Gay Byrne-helmed talk show with its unseen assistant (“Roll it there, Colette,” Gay would say when a film clip needed to be played) the most popular show in Ireland was “mass” which coincidentally also had an unseen assistant (God).

Mass, however, did not acknowledge the existence of sex or dissent or show people how to put a condom on a banana or what an American looked like. Predictably enough, Irish people were soon riding all over the place and demanding extensions for their houses and offshore bank accounts and the grumpy old man from the preceding paragraph knew that his dire prophecy had come to pass (I’m told The Late Late Show is still on television).

The X-Files
Chris Carter’s inventive saga about FBI agents investigating paranormal incidents not only kickstarted several decades of fantasy programmes built on overly complex mythologies that ultimately disappointed us and made us sad (see: Lost, Game of Thrones, America, the Fine Gael programme for Government).

The X-Files biggest legacy can be found, however, on “the internet” where trollish conspiracy theorists show a Mulder-like willingness to believe, what scientists call, “any old shite”.

The Big Breakfast/Don’t Forget your Toothbrush/TFI Friday
In the 1990s flame-haired audiovisual imp Chris Evans came up from hell and showed Channel 4 that the type of jape-filled, fourth-wall-breaking anarchy that went down so well on children’s programmes like Tiswas could also be deployed to entertain a generation of infantilised man-children who had never known infectious disease or war.

The insight spread through UK television like a pox and can be seen now in everything from Ant and Dec’s Saturday Night Takeaway to Newsnight since Jeremy Paxman left. They say Chris Evans now walks the earth addressing wrongs in an attempt to make amends. Too late, Evans. Too late.

The Simpsons
In the early 1990s, Americans realised they could more honestly deal with their imploding culture through abstracted Matt Groening drawings than through any other medium.

Before long, animation was the main outlet for adult analysis of the American dream (Beavis and Butthead, Southpark, Duckman, King of the Hill, Bob’s Burgers, Bojack Horseman, Rick and Morty). So much so, the American people eventually selected an outlandishly tinted buffoon with short stubby fingers as president.

Seinfeld
Jerry Seinfeld and Larry David’s sitcom demonstrated to the world that US telly protagonists didn’t need to be likeable. US television is now filled with horrible people – from Girls to It’s Always Sunny in Philadelphia to “the news”.

You can see the legacy of Buffy in everything from Orphan Black to The Avengers movies (with the first two also helmed by Joss Whedon) to the fourth wave of feminism.

The Day Today/Brasseye
When we first saw these Armando Iannucci and Chris Morris-helmed news parodies in the 1990s, we laughed at how they skewered the ludicrous pretensions of television news with their outlandish graphics, stupid simplifications and groundless melodrama. “That’s them told!” we said. Unfortunately, actual news producers were thinking, “Interesting . . . so we could, in theory, use more outlandish graphics, stupid simplifications and groundless melodrama?”

I recently watched a Newsnight episode in which Guardian columnist George Monbiot fed television presenter James O’Brien a fried squirrel (seriously) and I knew then that Chris Morris was laughing maniacally from the grave (Chris Morris isn’t dead, by the way, I just assume he sleeps in a grave).

Big Brother
It began in 2000 as a slightly worthy, chin-scratching experiment, in which normals were imprisoned in a TV set while po-faced boffins discussed them like they were zoo animals. Before long, the boffins were gone and the airwaves were filled with exotic morons taking their shirts off and bellowing at each other across whatever ersatz habitat they had made their own.

From our couches, we watched and judged. But the joke was on us. Little did we know our civilisation was all but over (see: US election 2016).

The Sopranos
There were other shows as great as The Sopranos in the early noughts but none were so repeatedly imitated . . . badly. After The Sopranos, television was coming down with amoral, grunting anti-heroes with substance abuse problems and/or commitment issues.

By 2017, I never wanted to see another flawed middle-aged man for as long as I live, which is difficult for me, as I am a flawed middle aged man. I have to avoid mirrors and many of my friends.

Sex and the City
Scientists and priests once assured us that there were just two types of women, but in 1998 Candace Bushnell and Darren Star discovered that there were in fact four. Soon, 90 per cent of all culture was questionnaires about whether you were a Carrie, Samantha, Miranda or Charlotte (I’m such a Carrie).

More importantly, however, television producers realised that it was possible to have a majority female cast and get an audience – hence today we have Orange is the New Black, The Good Fight and Broad City.

Actually, who am I kidding, The Golden Girls was warmer, funnier and cleverer than Sex and the City and they did it first. Everyone should rewatch it. And The Mary Tyler Moore Show. And Cagney and Lacey. And Murder, She Wrote. And Tenko.

The Movie Quiz: Who is the longest serving James Bond?
7

One World: Together at Home – the Irishman who helped get Lady Gaga to say yes
9