Expect those ‘Tom Hiddleston is the next James Bond’ rumours to fly thanks to the BBC’s slick new spy drama, while Hugh Laurie makes for a superb villain 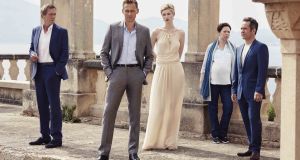 It’s likely that if you read The Night Manager, John le Carré’s 1993 thriller, you didn’t see Jonathan Pine, the night manager of the title, as blond and handsome, smooth even, but in this adaptation of the novel (BBC One, Sunday) the strikingly handsome Tom Hiddleston as Pine is that and more. He’s like James Bond – for a short while anyway.

In the opening scene he walks, unscathed through a rioting Cairo – it is 2011 during the Arab Spring – and he arrives at his job in the upmarket hotel (front door, no staff entrance for him) and changes into a sober black suit that he wears with panache, like a Bond tuxedo. One of the guests, Sophie – beautiful, bored, dangerous – seduces him, but before the inevitable bed scene she gives him documents that prove her wealthy lover, Freddie Hamid, is embroiled in an arms deal with an Englishman named Richard Roper (a pitch perfect, terrifying Hugh Laurie) who is, she tells Pine, “the worst man in the world”.

The documents are essentially a shopping list with enough weapons to start a war or quash an uprising. Pine, in a move that seems more the reflex action of an ex-soldier trained to keep the peace than a career change into espionage for the hotel worker, passes the evidence to a pal in the embassy. MI6 in London is alerted, with the details landing on the desk of intelligence operative and Roper hunter Angela Burr (Olivia Colman, mumsy in a cardi, not your usual spy wrangler). News of the document-leak gets back to Hamid and Roper. Sophie is murdered and Pine isn’t James Bond any more – he’s a guilt-ridden, crying heap.

The next time we meet Pine, it’s four years later and he’s the night manager in a quietly luxurious hotel in Zermatt coming face to face with arms dealer Roper at the check-in desk.

And there we have it: good versus evil, youth versus old age, two Englishmen (their nationality is key) with very different moral codes. It’s a tribute to the superb storytelling that precedes this simple encounter that we are instantly terrified for Pine when he meets Roper, whose outer moneyed vulgarity, burnished by a public profile as a humanitarian, is a credible cover for his nefarious dealings.

Pine is not presented as a helpless innocent: as Hiddleston plays it. there’s something hiding behind his apparent blank passivity. It’s something that’s picked up on, signalling future danger, by one of Roper’s entourage, the deeply odious Corcoran (Tom Hollander). And it’s a side to his character that makes his recruitment by Burr to catch Roper credible.

This is all clever, slickly-paced stuff – rarely has a TV hour sped by so quickly – and it’s not like that other TV adaptation of a le Carré novel, Tinker, Tailor, Soldier, Spy, which required the alertness of a sniper in a foxhole if most viewers had any hope of getting to grips with the intrigue. Famously, during the 1979 screening of that series, Terry Wogan ran a weekly competition on his radio show asking listeners “Does anybody know what’s going on?” So far, The Night Manager, while offering nuanced characters and layers of mystery, steers clear of such complexity.

Cold War thrillers are all spooks and codenames with the distance of time framing our reactions. In the same way that Homeland and The Honorable Woman anchored themselves to the headlines of the day, writer David Farr has updated the novel for TV. His referencing of current conflicts in the Middle East helps give The Night Manager a compelling immediacy. It’s a glossy, lavish drama and a Sunday-night winner, with five more weeks to come on the BBC.