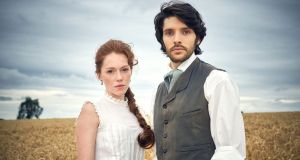 Charlotte Spencer and Colin Morgan in The Living and the Dead: old-fashioned ghost story but with depth

A visit to the eye-opening Underwear exhibition at the V&A in London earlier this month, which shows underwear down through the centuries, gave me a whole new way of looking at Victorian women and the vogue at that time for the supernatural. Fashion dictated that they wore the most restrictive corsets made of whalebones – torture garments, really – which gave them tiny waists, crushed their ribs and left them unable to breathe properly. They must have been near to fainting a lot of the time, living in a twilight daze. It’s little wonder that they were given to seeing apparitions and ghostly goings on.

The Living and the Dead (BBC Two, Tuesday), a new six-part drama set in bucolic rural Somerset in 1894, brilliantly captures this fascination with the supernatural, a febrile sense of hysteria and the early days of psychology. Its writer Ashley Pharoah (Life On Mars, Ashes To Ashes) sums up the atmospheric drama as “Sigmund Freud meets Thomas Hardy with ghosts”.

The Living and the Dead: trailer

Young pioneering psychologist Nathan Appleby (Colin Morgan) returns from London to his family estate on the death of his mother. The farm, still stuck in a pre-mechanisation era, is struggling. Vowing to turn it around, he and his vivacious young forward-thinking wife Charlotte (Charlotte Spencer) set to work modernising.

Then the local vicar seeks his help. His teenage daughter has been speaking in tongues and seeing ghosts and Appleby’s initial diagnoses is that she is in that difficult stage, between childhood and adulthood, with the implication that she will soon grow out of it. But hysteria transforms into something else and she becomes dangerously strange.

Sinister events start happening on the farm and while it seems unlikely to Appleby, a modern man of science, there is a growing suspicion that maybe they are linked – or could that just be more hysteria? The first compelling episode of the satisfyingly chilling The Living and the Dead sets the scene for the five episodes to come. Beautifully filmed and directed by Alice Troughton, it’s an appealingly old-fashioned ghost story but with depth, set against a backdrop of a rural society on the cusp of great change.