The Affair review: dissecting the anatomy of desire, adultery and self-delusion 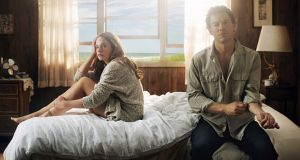 A matter of perspective: Ruth Wilson and Dominic West in The Affair. Photograph: Showtime

Deep into its third series, the theme music for The Affair (Tuesday, Sky Atlantic, 10pm) seems unlikely to lose its welcome or loosen its grip. That’s no small achievement in television drama, where opening credits are only slightly more beloved than advertising breaks and just as easy to avoid. But Fiona Apple’s stark song of foreboding and consequence, barely more than a minute long, has so much character it should be counted among the drama’s ensemble.

And for the third season, it has been matched with a new title sequence, replacing the home-movie reflections of the original with the submerged, monochrome sophistication of a designer perfume commercial. If you’ve followed this drama for two smart and intriguing seasons, stylised slickness was not its chief appeal, and nor were the loose ends of a murder-mystery within it, now all all-but-tied up. So, is this the end of The Affair?

That depends on how you look at things, which is fine with its creators Sarah Treem and Hagai Levi’s, who have always been slyly attentive to who is doing the looking. Like the 1950 film Rashomon or Brian Friel’s 1979 play Faith Healer, the events depicted here will alter according to the memory, ego or machinations of its characters, who share the narrative in chapters told from their perspective. If you are not yet caught up, you are advised to, because the telling is more intriguing than the tale.

The death of one turbulent character entangled them all in a complex web of culpability, for which Noah – divorced, remarried, and enjoying a Jay McInerney level of authorial fame – eventually took the fall, and served time. But nobody is out of anybody’s life.

If that death was little more than a plot device, allowing the characters to be interrogated and implied the tale was being spun retrospectively under scrutiny, Treem seems to have kick-started a new one with the third series, which might be labelled Who Stabbed Noah Solloway?

To the list of suspects above we can add two more: Juliette, a French lecturer specialising in courtly love, played by Irène Jacob, and a prison officer so fearsome he looks like he might have eaten two Brendan Frasers (Brendan Fraser). But, again, the show is most interesting in the margins.

Treem may be laying on her references a little thick. Juliette, Noah’s new colleague at a progressive university, is an expert in Le Morte d’Arthur, essentially the foundation text in adultery, but Treem’s underlying interest is something similar, the radically anti-social nature of desire.

There’s barely a single character here you don’t want to throttle at some stage, yet such forces make them all utterly compelling, laid bare in their erotic drive, their self-delusions, justifications or gender biases. In a device that will remain as fresh as Apple’s theme tune, nobody ever seems to agree on what the others were wearing – the male perspective almost invariably has Alison with shorter skirts, looser hair, more exposed skin, while Alison’s recollection, more credibly, allows Wilson’s performance a sharper quality; complex, steelier and certainly better dressed for the weather. Noah’s version of events will abound with persuasive speeches; the others see him as fundamentally taciturn. This is my truth, tell me yours.

But desire, as Mallory and Treem know, is something less accountable. Treem bravely enters a very thorny area on the campus of that college, which is engulfed by rape allegations and student protest, ablaze with debate on whether consent must be given in notarised terms, even while students and staff writhe with inappropriate longings, freely expressed.

Why do people do the rash, selfish, hurtful things they do, you wonder? And why the hell do others go along with it? Desire is an ambiguous thing and an ingenious showrunner. On that, at least, everyone seems to agree.

‘Ten of the best books set in Ireland’: Does the Guardian get it right?
10

Ah, will you not dump on your new Taoiseach for us? It’s the least you could do
Real news has value SUBSCRIBE