Television: The devastated dad who took on Tony Blair 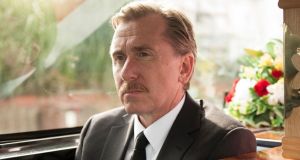 On a morning in June 2003, the lives of Reginald and Sally Keys were upturned by the news that their son had been killed in Iraq. Lance corporal Tom Keys was one was one of six military policemen murdered by a 500-strong Iraqi mob in the city of Majar Al-Kabir.

Tim Roth plays the title role in Reg (BBC One, Monday), an unassuming retired ambulance training manager who stood against Tony Blair in the prime minister’s own constituency of Sedgefield in the 2005 general election. “Where’s Sedgefield?” asks his grieving wife, played with devastating power by Anna Maxwell Martin.

Keys’s actions were spurred by the discovery that, due to a military scale-down, his son’s unit was left hopelessly under-equipped to defend itself in hostile territory. “Fifty rounds?” he asks incredulously when told how little ammunition each of the six were allocated.

When it emerged that Britain’s justification for going to war – the existence of weapons of mass destruction – may have been based on a pretext, Keys agreed to stand against Blair on behalf of the families of 88 British servicemen killed in Iraq.

Jimmy McGovern’s slow-burning drama sneaks quietly up and leaves you completely floored. Roth is brilliant as the quiet, measured Keys – we see him preparing his son’s body for the funeral with forensic attention to detail, and learning the extent of Tom’s terrible wounds. “One shot – would have been instantaneous,” he lies to Sally.

Keys is helped in his campaign by former Labour MP Bob Clay (Ralph Brown), who is keen to take down Blair. “My love of my son will keep me going a lot longer than your hatred of Tony bloody Blair,” Keys warns Clay. When Sally takes an overdose just before her husband is due to do a television interview, Clay unwisely decides not to tell Keys until afterward. When he does Keys is quick to remind him that family trumps everything.

The outcome of the election is clear (Blair is neatly CGI-ed in at the final count), but Reg is not about a fight for seats in a constituency, but a much deeper battle to give voice to the families of those whose lives were senselessly thrown away in a spurious war.

There’s a big turf war going on in Dublin as two rival groups duke it out for control of the gangland feud documentary trade. It might get ugly. The first salvo was fired by an outfit based in Fairview: Insight (UTV Ireland, Tuesday) is a rather anodyne, hand-wringing programme that skirts so far around the two families at the centre of the current shooting spree, it is practically on the M50.

We got some insight into the deprivation in Dublin’s inner city that makes a life of crime seem glamorous to young people. One local councillor points out the juxtaposition of Sheriff Street with the ostentatious affluence of the IFSC, where few inner city kids would ever hope to find a job. We also get a lot of footage of gardaí at checkpoints and crime scenes, and locals wondering when the shooting is going to stop.

Retaliation is swift from the Ballymount crowd. In Dublin’s Gangland War (TV3, Wednesday), Donal McIntyre gives a full history of the Hutch-Kinahan feud, with plenty of shaky footage from the Regency Hotel shooting and a timeline of each murder. “But this was only just the beginning,” McIntyre says portentously throughout the programme – and with no sign of a let-up in the feud, this could become his catchphrase.

Both programmes feature Taoiseach Enda Kenny’s appalling admission that there is nothing he could do to stop the violence. It looks like TV3’s superior firepower has won this round.

You’re running an ailing hairdressing business in Tallaght that’s shedding cash with alarming speed. You’ve cut wages, trimmed expenses and shaved off excess spending. But the business is still going under. Something drastic has to be done.

Fear not. Narrator Marty Morrissey has the solution. He’s going to call in one of Ireland’s “unsung heroes” with experience running a successful business. This super- executive does it all, from balancing the books to mucking out the cowsheds. Yes, it’s time for a farmer to rock up in his tractor and dig this dying business out of the silage pit.

Farmer in Charge (RTÉ One, Monday) is hardly a novel twist on the job-swap idea. The premise: get a son of the soil up from the country (in this case, Cork dairy farmer Maurice Walsh) to help save a struggling urban business (in this case, Angel hairdressers, run by husband and wife Nick and Claire Reddin).

Walsh admittedly knows nothing about hairdressing (although I’m sure he could do a good cowlick), but he does have a strong work ethic and plenty of hands-on experience. And he knows all about making hay while the sun shines.

It’s not long before the farming analogies are flying like cowpats: customers are compared to cattle (they can actually hear you over the hairdryers, Maurice), and though Maurice doesn’t exactly say he’s been sold a pig in a poke, you know that’s what he’s thinking.

Alas, Maurice can’t use the Cap to get an EU subsidy for the salon, but he can call in celebrity stylist Gary Kavanagh, professional store designer Maria O’Neill, and a bevy of beauty bloggers to help get the business back on track. Really, though, anyone with an ounce of business sense could have done the same.

How about getting in Michael O’Leary to sort out Irish Water’s liquidity? Or Louis Walsh to get the Luas back on track? Now there’s a chance for some real sparks to fly.

The egos have landed – again. Yes, a new bunch of housemates have arrived for the latest series of Big Brother (TV3, Tuesday), and a finer representation of the selfie-obsessed generation you could not hope to find if you googled until the cows came home.

There’s also Letitia, who is so Welsh she has a lamb tattooed on her “fanny”; and body double Jason, whose bum was apparently seen in Spectre. There are the annoying twins, Emma and Victoria, who look like the Cheeky Girls and count as a single housemate, and former BBC journalist Andy West, the token “principled person”.

Then there’s rich London geezer Chelsea, a sort of Indian version of Del Boy, who says he will miss his Bentley while in the house; and posh girl Georgina, who will miss her horses.

Is there a token Irish person this year? Yes, indeed: Dublin Traveller Hughie Maughan, but he’s not actually in the Big Brother house. To make it all a bit less boring, the producers have built a second, secret Big Brother house and filled it with six jealous, resentful wannabes who will plot to take down the housemates and take their place in the main house.

The housemates are oblivious to the existence of “the Others”, but they’ll soon be feeling very creeped out and paranoid as the Others put their nefarious plans to work.

Next year, I’ve no doubt they’ll arm the housemates and let them at it, Hunger Games -style.

Ones to Watch: Kim’s skin and Koko’s skill
Get the face cream out: Kim Cattrall returns as former model Davina in the Canadian comedy-drama Sensitive Skin (Sky Arts, Wednesday, 10pm). Davina is still dealing with midlife issues and still trying to revive her career and marriage. This time, she’s getting out of the city in search of a more balanced life. A real-life Dr Doolittle, Penny Patterson has devoted her life to talking to one particular animal in Koko: The Gorilla Who Talks to People (BBC One, Wednesday, 8.30pm). Koko doesn’t actually speak, mind you, but has learned sign language that allows him to converse with humans. Wonder if he has an opinion on Brexit.

Bernice Harrison is on leave