Television: Red Rock got off to a rollicking good start

Review: Anyone tuning in to see shaking scenery and ropey acting will have been disappointed 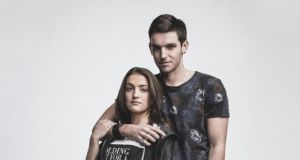 A bloody body on the pier and a rather attractive sergeant on his way to investigate; a young couple snogging in the pub, taking breathers only to hint that theirs is a forbidden love (second only to a love triangle in the soap hierarchy of affairs), two warring families from either side of the tracks; and a rookie garda who discovers a dark secret about a colleague that could ruin both their careers - all in a scant half-hour of TV time. But that’s soap for you – and Red Rock, TV3’s new twice-weekly drama got off to a rollicking good start on Wednesday, introducing a range of strong, perfectly realised characters from the terrifying scheming matriarch of the moneyed Hennessy family (a gimlet-eyed Cathy Belton) to the comic relief from amiable jobsworth Paudge (Pat Ryan) a garda who’d rather be collecting rent from his bedsits than working.

Red Rock is set in a seaside town somewhere along Dublin’s coast - urban with a watery twist - and it is the first Irish-made soap since Ros na Rún kicked off on TG4 in 1996. The garda station is the main location (like Sun Hill, back in the days of The Bill on ITV) and that’s presumably where the main storylines are going to come from every week. There’s a pub, a café, and a soon-to-open supermarket where the Red Rock residents can casually bump into each other.

6 Stephen Collins: Trump values appear set to prevail in Irish politics at the next election

10 ‘Doug and Kamala together are almost vomit-inducingly cute and couply’: The VP’s stepkids speak

11 Covid-19: Nphet warns of a ‘large number’ of deaths in coming weeks

16 Damian de Allende settling in at Munster after rollercoaster start

20 A full-on Zero Covid-19 strategy is unlikely, but Irish hybrid a possibility

22 Covid-19: Proposed £500 payout for anyone testing positive in England

23 Covid-19: Which windows to open to keep your car a low-risk zone

24 Cold and working from home? How to stay warm without whacking up the heating

27 ‘I should be feeling despondent. I don’t’: Chefs dish up the truth about life in lockdown

28 A Kerala Kitchen curry for the weekend

29 In Bling Empire people hang out of cars with their shirts off. Big deal. I did that in Newbridge

31 Growing pressure for ban on non-essential travel within EU

37 Biden has promised to ‘restore the soul of America’ but what might that mean for Ireland?

39 ‘An inspiration’: Young poet Amanda Gorman and her words capture the moment at Biden inauguration

40 Professional salaries will be flat in 2021, says Morgan McKinley