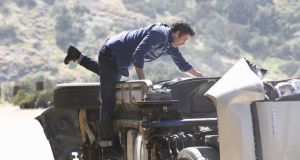 As Meredith would say in that upwardly inflected way of hers, “Seriously? Derek?” As decade-long fans of the goings-on in the emergency department of Seattle Grace Hospital know, Meredith – one half of MerDer, wife of McDreamy – says “seriously” a lot. It’s one of her vocal ticks.

She’s right this time, though. Major spoiler alert: what viewers watching the phenomenally successful hospital drama Grey’s Anatomy on RTÉ2 on Tuesdays don’t know is that Dr Derek Shepherd is dead, after being hit by a truck.

Sky Living is way ahead of RTÉ in showing season 11; we saw the sad action unfold with indecent haste on Wednesday.

In television-drama terms it’s an inglorious way to go. The show’s creator, Shonda Rhimes, wrote the episode. Not for Shepherd the lingering exit afforded to the likes of Dr Izzie Stevens (Katherine Heigl) or the dramatic twists when McSteamy Dr Mark Sloan (Eric Dane) – the “Mc” prefix got a bit old after series six – died after the plane crash. And there have been many others. It’s more dangerous to be a doctor at Seattle Grace than it is to be a patient.

But this is different. How will Grey’s Anatomy fare without the easy-on-the-eye Patrick Dempsey, one of its true stars? Just look at the problems that killing off Will Gardner caused last year for The Good Wife (RTE Two, Tuesday; E4, Thursday). With Josh Charles’s character gone The Good Wife has no physical home base, no Rover’s Return: his office was the place where so much happened and to where everyone returned, and the tense dynamic between Will and Kalinda, his bisexual investigator, is missed: Archie Panjabi’s character has unconvincingly changed from fearless badass to submissive dogsbody for a drug boss.

And of course there’s the relationship between Will and Alicia. The underlying driver of so many episodes of The Good Wife, the will-they-won’t-they-oops-they- did storyline was the stuff of nuanced, grown-up human dynamics with emotional baggage galore. And it never got old.

Now it’s all about Alicia (Julianna Margulies) becoming as tough as flint and morally compromised – and oddly boring and one-dimensional – as she runs for office in a storyline that, as it reaches its end, has got flabby and more tedious than the UK general-election campaign.

It looks like it’s going to take more than one series for The Good Wife to get over Will going. I suspect it will take Grey’s Anatomy a lot longer to recover from Derek’s exit.

No Offence (Tuesday), Channel 4’s new police procedural, is shameless in the way its writer, Paul Abbott, presses all the politically incorrect buttons: racism, animal cruelty, sexism, bullying and much more. And it’s fantastically rude: “He couldn’t find a clit with a ladyfuzz search engine,” says the maybe unhinged, definitely gobby boss, DI Vivienne Deering (the magnetic Joanna Scanlan), of one of her underlings. It’s the only programme this week that I set on series link so I wouldn’t miss a minute of the eight-part run.

In outline No Offence is your basic grittier-than-life, fast-talking cop-shop drama; set in Manchester, its team are on the hunt for a serial killer. There’s Deering and her right-hand women, the impulsive DC Dinah Kowalska (the Irish actor Elaine Cassidy) and the mousey, just-promoted DS Joy Freers (Alexandra Roach). For fans of crime dramas with strong female leads it fills the gap left by Scott & Bailey, with many echoes of that superb police procedural and not just because the station’s toilets are the meeting place of choice for the team.

As in his previous hit Shameless Abbott gives perfectly formed lines to his characters in their heightened situations; all his characters are always on: mouthy, sharp or both. Kowalska asks a missing girl’s sister whom their parents went to Spain with. There’s a blank look from the drugged-up scally. “EasyJet or Ryanair?” Kowalska asks, persisting. “EasyJet. Me dad’s phobic about trumpets since Afghanistan.”

Zingers like that bring No Offence to the brink of laugh-out-loud comedy, but Abbott’s scenes – that one takes place at a stoned, home-alone house party, with the teenagers unaware their sister has been abducted – keep it rooted on the side of dark humour.

And big-hearted, foul-mouthed Deering is every bit as monstrous and memorable, even after only one episode, as Abbott’s other like-him-or-loathe him creation, Frank Gallagher in Shameless.

No Offence is packed with crime-drama cliches, but an emotional connection between the characters gives it an appealing depth beneath the filthily funny surface.

If you haven’t heard about the blogger Lisa Lynch, then the title of The C Word (BBC One, Sunday) might have set you up for a world of euphemism, the old-school approach to discussing cancer. But the feature-length drama, a straightforward biopic, is based on the brutally honest and hugely popular blog she started when she was diagnosed with breast cancer, at the age of 28.

The opening scenes, a montage of parties, work, Sundays with friends in the pub, show the life of fun and possibilities that the newly married magazine editor (Sheridan Smith) has “before”. After her mammogram her husband, Pete (Paul Nicholls, nailing the difficult role of a character always in the background but very much present), asks what it was like. “It feels like getting your tit caught in the car door,” says Lisa, and the tone is set for what follows.

It’s hard to avoid sentimentality in “cancer films”, especially when they involve a young person dying, but Nicole Taylor’s pared-down script manages it – although there’s not much room for fuzzy sentiment wrapped in a pink ribbon when the brutal, undignified reality of cancer treatment and the pain of the disease as Lisa experienced it are laid bare in scene after scene. And there’s no swelling music nudging you towards the Kleenex. The only time you’re moved towards tears are for reasons of frustration when, two years after the apparently successful treatment, the cancer comes back.

Sheridan Smith should get (another) Bafta for this: she’s utterly astonishing in a truly immersive performance. The C Word is a tough watch – but it’s a tough subject.