Television: Crime and punishment, wrapped up in tweed or hidden behind bars

It’s all very well being tweedy, but elements of ‘Endeavour’ jar with the likeable aspects of ‘Morse’ 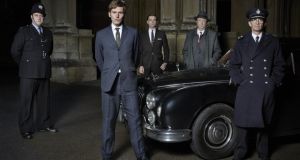 A gentle, beautifully made whodunnit with nice costumes and no gory forensics is just right for a Sunday night, when you need to be diversted from the week ahead. Endeavour (UTV), the Inspector Morse prequel, does it particularly well. Set in the 1960s, it follows a young Morse (Shaun Evans) as he returns from sick leave to three crimes that he believes are linked – although his superiors take convincing. There’s a man who fell from a tall building, a missing girl and, because an Oxford college and academics have to figure somewhere, the theft of a trove of precious artefacts. Throw in a local election, some rather nice tweed suits and the dastardly lodge of Freemasons and you have a very English, very Morse drama.

Having happily bought into the idea in the first series that Evans could be a young Morse – he has the outward trappings, being fond of Jags, arias and a pint – I’m not sure I believe the young Morse as developed in this episode, which is the first of four. Here he is simply unlikeable, churlish, morose and mostly monosyllabic. Are we really to believe that the nice nurse in the apartment across the hall is going to fall for him, as is telegraphed this week? John Thaw’s Morse was a curmudgeon, but he didn’t lack charm. And young Morse spends the episode barely speaking, yet when it comes to the Poirot -style denouement, in which everyone is gathered together and he reveals who done it and why – Endeavour really is old school – his fluid, very lengthy speech seems out of character. (An unsavoury twist involving incest also seems an inconsistent add-on.) Roger Allam plays DI Fred Thursday, the calm, pipe-sucking voice of experience who is Morse’s mentor and father figure. He is so perfect that he could get a spin-off series of his own.

True crime is not as neat and appealing. The excellent, gritty and tough-to-watch observational documentary Prison Families (TV3, Tuesday) looks at the grindingly difficult experience of people whose son or partner is in prison.

It is a sensitive piece of work from producer Anne McLoughlin, who rewards the plain-speaking honesty of the participants by simply letting them tell their story. Brendan, a taxi driver and father-of-four, is hopeful that his 25-year-old addict son, Stephen, will stay on the straight and narrow when he gets out of Midlands Prison. Donna’s partner is in Mountjoy. She describes what “a hands-on dad” he is to their baby and how she “couldn’t have wished for a better father for him”.

In Brendan’s and, later, Mary’s stories we see the world their sons have dragged them into, the chaos of having a heroin addict in the house, and the relief for Brendan when his son is in prison. At least then, he says, he knows where he is at night. For Mary in Killarney, her son’s imprisonment means the extra responsibility of bringing up his child as well as her own teenagers, the long monthly round trips to Midlands Prison, and the emotional exhaustion of protecting the toddler from the reality that his dad, whom he hardly knows, is in jail and not “working away”.

The three young women in the show – Donna and Lauren from Dublin and Rachel from Limerick – had an idea what they were getting into with their choice of partners. They seem tougher and, in Lauren’s case, more resentful of the system. But, for Mary and Brendan, having adult sons in prison is another painful twist in the long road of parenthood, and their insights into their situation are raw and realistic without a trace of self pity. Prison Families (the second part is next week) is a rare, superbly made, very human insight into an aspect of crime and punishment that’s easy to forget.

More than two decades of Irish history in an hour is a big ask – even Endeavour has two hours – so there is a sense of trying to push a very big story into a very small package in A Sovereign People (RTÉ One, Thursday). But Seán Ó Mórdha’s documentary does tell an evocative story with the help of some lively contributors. Its starting point is 1900, with reference back to Robert Emmet and the 1890s, when in Ireland “sovereign” meant the queen’s head on letter boxes, royal portraits everywhere and direct rule from London. Twenty years later, sovereignty meant something different to a newly confident people who were now aware of their nationality and were buoyed by the power and influence of organisations such the Gaelic League and the GAA, as well as their emerging political and military muscle.

The documentary goes some way to explaining why Home Rule was never going to be enough, why Edward Carson in the North feared it, and why John Redmond, leader of the Irish Parliamentary Party, was so out of touch with a people who had come to believe that sovereignty was their right and not a gift that could be bestowed on them

Caitríona Crowe of the National Archives neatly shorthands the Gaelic revival in the first decade of the last century, pointing out that in the 1911 census many signed their names with a flourish as Gaeilge when, just 10 years before, they had been happy to use the English version. The playwright Sean O’Casey is just one example: by 1911 he was Seaghan Ó Cathasaigh.

Incidentally, the only female contributor is Crowe, and just her name is given, not her credentials; the same goes for the writer and scholar Declan Kiberd, PJ Mathews of UCD, the former National Museum of Ireland director Pat Wallace, and the other contributors. This seems a parochial decision, as if RTÉ viewers should know these people – or maybe it assumes the only people interested in watching a history documentary would know them.

With the centenary of 1916 looming, I suspect documentary makers are already poring over archive footage and looking for new angles, but I hope they find a more creative way to tell the story. Irish-made documentaries about Irish history so often follow the same formula as A Sovereign People : archive footage, historians or other academics talking to a point in the middle distance, a sombre voiceover, and a classy piece of Irish music swelling in the background. It’s all the more noticeable because the same archive footage and photographs seem to crop up in every documentary.

The educational importance of documentaries such as A Sovereign People is undeniable, but there is also the potential to explore television’s capacity to tell a story. And if a historical documentary about the period were to be shown, shouldn’t it be about Cumann na mBan, which celebrates its centenary this week?