Television: Clear motive behind dramatisation of trial by media

Review: ‘The Lost Honour of Christopher Jefferies’ is not subtle about its message 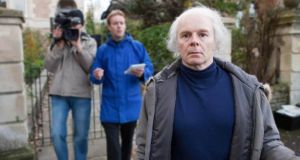 Jason Watkins in The Lost Honour of Christopher Jefferies

In Bristol, in 2010, Christopher Jefferies paid a high price for being a bit odd. In December that year one of his tenants – he was a landlord – Joanna Yeates, went missing, and her disappearance played out in the media like a whodunnit. Almost immediately Jefferies was in the frame. He had the keys to her apartment, and another resident of the small apartment block, Vincent Tabak – the young man who was in fact her killer – gave police information about Jefferies’s movement that seemed to further incriminate him. So he was taken into custody – which is when the media descended, as Jefferies was a gift to the headline gods.

He looked eccentric, with his birds’ nest of grey hair and extravagant comb-over, and his speech was precise and mannered, which came to equal creepy in the coverage. He was a retired English teacher; headlines interpreted his love of poetry and French literature, and his “poshness”, as somehow deviant. His life was dissected, with quotes from random and distant “friends”, and photographs of him dating decades ago, taking up tabloid spreads for weeks while news crews camped outside his house.

In the three weeks before Yeates’s body was found, buried some distance away, the relentless media decided he was the number one suspect. Then DNA showed Tabak was the culprit. The reason The Lost Honour of Christopher Jefferies (UTV, Wednesday and Thursday) is a two-part drama, shown on consecutive nights, becomes clear in episode two. This is an explicitly campaigning work, a docudrama designed to support the Leveson Inquiry. This example of trial by media of a noncelebrity shows why a public inquiry into the culture and practices of the British press is necessary.

That also explains why Yeates isn’t the story:the drama is presented from Jefferies’s point of view. (I do wonder what her parents think of this vivid depiction of Jefferies as a victim, so soon after their daughter’s death; Yeates is the real victim in all this.)

So part one of The Lost Honour of Christopher Jefferies is a straightforward, well-made docudrama with Jason Watkins, as Jefferies, capturing the eccentric character until hounding by the media (helped by leaks from the police) changes his world. Watkins’s immersive portrayal isn’t entirely sympathetic; Jefferies’s prissy, pedantic approach to everything, from correcting a policeman’s grammar to his obsession with his hair, is irritating.

In the second part the message writ large in the title kicks in early, when a friend of Jefferies asks him, “What’s the Leveson Inquiry?” It’s a clunky line of dialogue, an agitprop cue from its writer, Peter Morgan.

Jefferies, his hair now clipped and dyed – the media treatment encourages him to look more “normal” – fights back through the courts, wins substantial libel damages and gives evidence to the inquiry. There’s even a waiting-room scene – the Everyman meets the celebrity – when Jefferies meets the high-profile Leveson champion Steve Coogan (playing himself), an event that never happened. It’s there purely for dramatic effect. It plays out like an absorbing post-Leveson primer, hammering home that the inquiry has relevance beyond celebrities and showing that the Jefferies story is an indisputably damning example of modern trial by media.

As fans of Horrible Histories, the irreverent, hilarious children’s TV series, know, history programmes don’t have to be dull and worthy. For his romp through Ireland’s medieval past, Holding Out for a Hero (RTÉ2, Monday) – it’s his second history series – the comedian Neil Delamere takes the Horrible Histories formula of giddy re-enactments and downright silliness – his troupe of actors are terrific – gets historians to fill in the facts and punctuates the lot with his stand-up show before a live audience.

It shouldn’t work, but it does. This week’s romp through the life and fighting times of Red Hugh O’Donnell is a clever, engaging piece of work. It’s Delamere’s enthusiasm that does it, his willingness to tell the story in all sorts of silly ways without acting the eejit. So he wanders around in pantaloons and tights, is put in the stocks in Dublin (passing tourists love it), shoots a cannon at a pig’s carcass, to learn more about gunfighting during the Nine Years War, and, visibly pale and terrified, abseils down Dublin Castle to re-enact Red Hugh’s daring escape from captivity – before being told that, for historical accuracy, he should have slid down the sewage pipe.

His trusty sidekick is the easygoing historian Billy Mag Fhloinn, who delivers the facts but buys into the high-spirited shenanigans. Several experts are roped in, so there’s the satisfaction of actually learning something.

Last week’s profile of Cúchulainn was an energetic skite through the many myths of the hurley-wielding warrior. The real mystery is why Holding Out for a Hero is on so late. Take out his stand-up sections – although they are funny; how is he let back into Louth after slagging it off so hilariously? – and it’s terrific kids’ viewing.

For the final programme in its current run, Alan Yentob’s Imagine arts strand dusts off one from the archive. Scrabble: A Night on the Tiles (BBC Two, Tuesday) is possibly timed to coincide with the seasonal attempt at a family board game and the inevitable row over makey-up words.

The journalist Lynn Barber and the musician Moby are among those explaining the joy of the game. Barber says Scrabble is where you can use with impunity rude words that you wouldn’t think of using in normal life: who could resist adding a “t” to the end of “bin”?

In Nigeria, Scrabble is classed as a sport, and there are grants for it – Yentob joins the team in a Scrabble boot camp as they prepare for the world championships. He is crestfallen to learn that many of the top Scrabble players don’t know what the words they use mean. “Words don’t have meaning. They’re just points,” Yentob says dejectedly. And the best Scrabble players are those with a maths bent: it’s more about tactics than vocabulary. The top tip is to learn all 124 Scrabble-accepted two-letter words, starting with that otherwise not very useful word for cindery lava, aa.

Ones to Watch: Light on Gray

One Ocean: No Limits (RTÉ One, Sunday) is an inspirational, award-winning documentary following a young Irish rower – part of a crew of six – crossing the Atlantic Ocean.

The hugely anticipated cameo is finally set to air: George Clooney (left) with Hugh Bonneville in Downton Abbey. Text Santa (UTV, Friday) is a sketch for charity, though, and not in the drama itself.