Television: Carrie is back with a bang, but for Nidge it’s something of a whimper 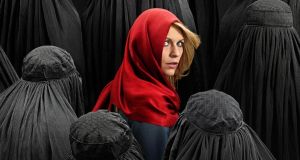 Few jobs are so interesting that a camera crew can knock two hours of relatively consecutive, engaging television out of them. Even actors describe their work as boring, what with all that hanging around. So the fashion for observational documentaries in workplaces is fraught with potential to dullness.

That said, it can still work. On paper 24 Hours in A&E (Channel 4, Sunday) is about doctors and nurses, but it’s also brilliant TV, with 91 cameras catching everything that happens in a day in the emergency department of King’s College Hospital in London. As well as the amazing work of the staff, the stories of the patients are told in a way that never fails to engage. It’s like seeing 20 dramas in an hour.

The same people have now made 24 Hours in Police Custody (Channel 4, Monday), with the same multicamera, up-close shots and sense of immediacy. It’s not life or death; it has a different dramatic impetus: officers at Luton police station have just 24 hours’ custody time before they must charge or release a suspect. Aside from giving an insight into urban policing, it lets fans of TV police dramas see what a real interrogation looks like: a repeated and mumbled “no comment” is the frustrating dialogue of choice for most suspects.

And so to Inside Probation (RTÉ One, Monday), which looks at the day-to-day work of four officers of the Irish Probation Service. They have a tough job: their clients live chaotic lives, and inevitably a frustration, even hopelessness, is built into the dynamic: some probationers have charge sheets that run into hundreds of offences. But as a TV programme it is repetitive and predictable. Cut down to 15 minutes it could make an insightful short for Prime Time. But stretched over an hour – actually, two: the second part is next week – it seems determined to stress the positives in the service it was permitted to film. (The same could be said of Women on the Inside, a series about the Dóchas prison, made by the same production company for the same broadcaster.)

There are some strange decisions by the filmmakers. They give subtitles to a probationer whose Dublin accent is perfectly intelligible. Meetings between caseworkers and their clients – this is mostly an office- based programme – have that stilted attempt at naturalism where everyone’s awareness of the cameras is obvious. How probation fits into the legal-services jigsaw is worth exploring, but an unquestioning approach to the service as it’s delivered doesn’t fill in too many gaps: it just feels like a missed opportunity to see how the system functions.

It takes a certain loyalty – to Claire Danes as cry-face Carrie, to the memory of the storming series one, to quality US drama – to tune into the fourth season of Homeland (RTÉ One, Tuesday). Season two was a dud. Season three slowly clawed its way back to credibility – and ended with the definitive narrative changer of the death of Brody, Damien Lewis’s character.

Homeland’s new shape is as a spare action thriller firmly anchored in Middle East politics with a monstrous Carrie at its core. She is now the CIA chief in Kabul – she has left her baby back home, in the US – where her nickname is the Drone Queen. At the start of the first episode, and with a chilling casualness, she sanctions a bomb drop in Afghanistan. This being modern warfare, it’s as simple as pressing a button on a video game. But flawed information means the bomb is dropped on a wedding party, which kills the target terrorist but also 40 family members. International outrage ensues – part of Homeland’s power lies in the way it references the complex reality of Middle East politics and taps into hazy memories of real events – and it’s the first test of Carrie as the boss.

Peter, the shadowy black-ops guy from series two, is back as a foil – and maybe a love interest for Carrie, although I hope not; the Brody romance is what ruined it before. It wouldn’t be Homeland without Saul, played by Mandy Patinkin, who is tiring of his cushy private-security number and wants back into Carrie’s chaotic world.

An intriguing new character and an unlikely nemesis for flint-hard Carrie is a young medical student, the only surviving member of the wedding party, played by Suraj Sharma, from Life of Pi. It’s not Homeland series one, but on the strength of a pacy and packed first episode it’s shaping up to be tight, smart thriller – and Claire Danes is superb.

By comparison Love/Hate (RTÉ One, Sunday) doesn’t look like the start of an exciting new series; it’s more a familiar-looking continuation of what we’ve seen before. It has an overload of the now-expected stylish touchs: there’s the hip soundtrack and the cinematic pumped-up street scenes, such as the opener in Spain, as Nidge (Tom Vaughan-Lawlor) and Elmo head for their meeting with the exiled Dublin kingpin Terrence (Paudge Behan). Love/Hate is all about Nidge – the only fully developed character – and the new storyline is that he’s now a marked man. He’s not just paranoid; everyone really is out to get him. There are some changes, with a new character, Paulie (Johnny Ward), although he’s not a particularly interesting figure; the emergence of a Traveller gang; and an experiment with timelines. Nidge’s meeting in Spain is shown several times, intercut with the action in Dublin, but it’s for effect, for style. All that happens is that Nidge is repeatedly told he’s not going to live through this. It’s a waste of time – there are only six episodes – that could be spent developing other stories to enrich the characters or the plot.

Det Moynihan (Brian F O’Byrne) is still on his tail (from series four), and Siobhán (Charlie Murphy) has turned informer. Although their improbable meet-up in a car is a clunky device to bring Moynihan into the episode, the stilted dialogue is more suited to an awkward first date. And Lizzie’s assassination at the end feels bolted on, squeezed into a space that would have had more room if there hadn’t been so much faffing around with pretty shots in Spain. You still have to watch it, though.

Ones to Watch: The naked truth in Leitrim Angela Scanlon, a fashion stylist who usually spend her time dressing people, presents Angela Scanlon: Full Frontal (Thursday RTÉ Two), a four-part series about Irish people who like to get naked. First up is a visit to naturists in Co Leitrim. Sounds chilly.

The Knick (Sky Atlantic, Thursday), a glossy HBO medical drama, set in 1900, that is directed by Steven Soderbergh and features Clive Owen and Eve Hewson, takes its name from the Knickerbocker, a Manhattan hospital facing collapse in a city riddled with disease and corruption.