Television: Can we put this pantomime of cliches behind us? Oh yes we can!

‘The Centre’ has a few good one-liners, but RTÉ’s paper-thin sitcom is another one for the bad books 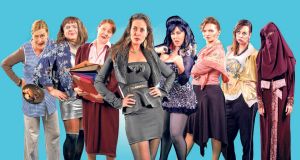 Lame dames: ‘The Centre’, on RTÉ

I blame the spirit of Jimmy O’Dea and Maureen Potter. Playing to the gallery is somehow soldered on to the DNA chain of our comedians so that on the small screen – and the clue is in the name, even if it’s a 50in-flatscreen extravaganza – there’s a tendency to play it so big that the woman in the upper circle can see every gurning expression while being roared at. It’s what makes Irish TV comedy seem so stagy.

This is great if you like that sort of thing – and millions love Mrs Brown’s Boys – but it kills something like The Walshes , another coproduction between RTÉ and the BBC, which ended its short run this week a little less flat and corny than when it started but still defeated mostly by the big, stagy acting.

The Centre (Monday, RTÉ Two) is a new RTÉ sitcom – a phrase to make your blood run cold – filmed as a mockumentary. This means a sober-sounding voiceover commenting on the action in a run-down community centre in west Dublin, and bits where some of the characters talk to camera.

It’s brash, vulgar, determined to offend just about any minority group you can think of, and so over the top that a pantomime horse could wander into the action and fit right in. But – and it is a small but – it has more funny one-liners (from writers Marion Cullen and Warren Meyler) than you’d normally find in an entire home-grown comedy series.

The Centre looks as cheap as chips (that’s not unusual), and its ensemble cast is overwhelmingly female (which is). Disappointingly, though, each plays a dressing-up-box stereotype. Katherine Lynch is Bernie the Traveller, giving First Holy Communion boot-camp classes. “If God didn’t like flouncy dresses, what would the pope be wearing?” she asks the children. “A trackie,” they chorus.

And, just to spread the religious offence around, there’s Jennifer Maguire in a full-body burka as Gráinne: “Either you’ve come to work wearing your spray-tan tent or else you’re in the Muslims,” someone says. “Bernie’s a human win-win bingo book,” says the centre manager, Teresa (Helen O’Brien), because she brings in funding from many sources, from the “Pavee grant” to the disability grant, “on account of her illiteracy, or was it leprosy? Who cares, says you: they both get the same reaction at the book club.”

There are a couple of men, including Gary Cooke, who in Après Match does a spot-on Eamon Dunphy. Here he’s a pre-op transsexual (cue any number of “mickey” jokes – and they’re the classier gags) in a wig and dress, with a slick of badly applied make-up – a sitcom view of a transsexual person from the last century.

Overall, this first episode feels like a very long sketch. I can’t see how they’ll stretch the mock shock value of such paper-thin, cliched characters over an entire series.

Compared with The Centre , Rev (BBC Two, Monday) couldn’t be less overblown or blousy. The unlikely multi-award-winning hit – a comedy about faith, a befuddled vicar and his struggling London parish – is back for a third series with the same gentle, slightly-puzzled-with-itself humour.

You’re not going to laugh out loud at Rev , although this week’s interchange between Adam the vicar (Tom Hollander) and the local imam (Kayvan Novak) nearly gets there with knowing jibes about hijabs and the difference in congregation sizes.

The two get together to raise funds for a playground. “Why don’t you get one of your three gods to help you?” asks the imam pointedly. It’s not often that sitcom dialogue is built around comparative theology.

The growth of Islam in London isn’t the most likely sitcom fodder, but it works, as does more traditional stuff such as Adam’s wife, Alex (Olivia Colman), loudly giving birth in a taxi accompanied only by the prissy archdeacon, and the arrival of the fearsome new area dean and her sidekick (Joanna Scanlan and Vicki Pepperdine) on a mission to close Adam’s church.

For subtle, thoughtful humour with musings about faith and holes in socks (often in the same sentence), and with superb performances from Hollander and Colman, Rev is a treat.

There’s a perception that all a crime series has to have is Nordic heritage, moody lighting, a wardrobe of grey clothes, and subtitles to get TV critics slobbering like Pavlov’s dog. But Mammon (More4, Friday), a new Norwegian import, is shaping up to be a clever, compelling thriller.

As the title suggests, it’s about greed – corporate greed – and it begins in 2008 with a newspaper journalist, Peter Verås (Jon Øigarden), exposing a scandal that incriminates his older brother. It’s an exposé that ends in tragedy and sees the paper’s top investigative reporter transfer to the sports department – the torment of that.

Five years later he returns to the story, thanks to more, tantalising information. This time around he has an unlikely sidekick, in Vibeke, a paranoid investigator from the economic-crimes unit, and soon they are on the trail of another financial scandal that may be linked to the first.

As with other Scandi crime dramas, there’s an authenticity about Mammon : details, such as the way Verås’s newspaper holds off printing his big story until it has been picked over by the paper’s lawyers, make you more inclined to believe the bigger plot, which looks like it’s going to be devilishly challenging as it unwinds.

Louis Theroux is one of those documentary makers I thought couldn’t do ordinary or boring, but his foray into the dog problems of LA – is that really a thing? Having watched this documentary, the first in a trilogy about LA, I’m not sure it is – was dull to the point of turn-off.

Mostly – and this is one of Theroux’s lanky charms – he stands back from his interviewees, giving us his perspective of a world we never normally have access to, and his gauche, almost passive interview style (he’s a bit like Columbo) delivers revealing insights.

But in Louis Theroux’s LA Stories: City of Dogs (BBC Two, Sunday) he stands back because he mostly looks terrified or repulsed by all the dogs – and, as some of them were “weaponised”, or trained to attack, who’d blame him? But he also seemed uninterested in the not-particularly-interesting dog lovers, rescuers and eccentric trainers.

Theroux’s style is to repeatedly go back to interviewees to get more of the story, to show that he has formed a relationship with them, but there are only so many times you can watch him visit the same dog-rescue facility and hear about unwanted dogs being “euthanised”.

That seems to stun him every time, though surely he didn’t have to go to the mean streets of LA’s Watts area to hear that.