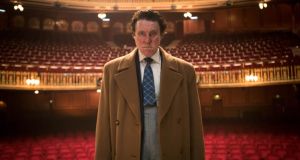 For decades the comedian Tommy Cooper was one of the most impersonated stars: a hoarse “just like that”, a shrug of the shoulders, the machine-gun laugh – and if a fez was handy, just putting it on was enough. So in Tommy Cooper: Not Like That, Like This (UTV, Monday) David Threlfall has his work cut out, especially as the Shameless actor isn’t as physically imposing as Cooper. In the event he turns in what’s likely to be an award-winning performance that captures Cooper’s comic genius, effortless stage presence and selfish, insecure personality. A significant reason why the two-hour biopic is so entertaining is that Threlfall is hilarious at doing Cooper’s bumbling-magician act and delivering his famously corny one-liners.

As it’s a biopic of a British entertainer who was big on TV in the 1970s and 1980s, there’s the uneasy expectation of some grisly secret, a revelation to make you revisit all you thought you knew. With Cooper it’s mainly violence against women – averred to subtly and briefly in Simon Nye’s script and seen only in a postpub dust-up in the street with his wife, “who gives as good as she gets”. There is also his alcoholism, destructive but often laughed off by Cooper: “I’m on a whiskey diet. I’ve lost three days already.” This is, above all, an affectionate portrayal, and to fully explore those themes would tip it into deeply unlikeable territory.

The other secret around which this biopic is built is the comedian’s 17-year affair with his assistant Mary Kay (Helen McCrory), who was with him, in the wings, right up to his death, which famously took place live on television, to uproarious laughter from the audience, who thought it was a classic Cooper gag. Threlfall’s performance in this final scene is stunning.

The people in Cooper’s life are long suffering – his sweet, passive mistress, his blowsy wife, Gwen “Dove” Cooper (Amanda Redman: a revelation), his dour agent, Miff Ferrie (Gregor Fisher), and anyone on the receiving end of his renowned tightness. “Have a drink on me,” he says to his driver, stuffing something into the man’s pocket. It turns out to be a teabag.

He advises Dove not to try to look “too deeply” into his psyche, because “there’s nothing there”, and Cooper is presented like one of his magic tricks: what you see is what you get. There’s no explanation why, even off stage, he was always joking, always on – a pressure that contributed to his death and why, though crippled with stage fright, he continued to play clubs from Skegness to Scarborough long after his television career had taken off. As a film it’s a classy piece of work, perfectly directed, with an easy pace that takes in three decades, from the 1960s to the 1980s, with clothes and scene-setting subtly charting the changing times.

Daphne Du Maurier’s Jamaica Inn (BBC One, Monday, Tuesday and Wednesday) is a lusty old potboiler set in Cornwall in the 1820s in which the orphaned Mary Yellan moves to her aunt and uncle’s remote inn only to slowly realise that the pair lead a band of murderous smugglers all controlled by the local reverend. They (evil) all die, she (good) survives, as does her new love, vagabond Jem, and she rides off into the sunset with him. Alfred Hitchcock couldn’t make a good movie out it, and I don’t remember its first TV outing, in 1983, with Jane Seymour and Trevor Eve, but I imagine that was made to capture the huge following for the Poldark series.

This lavish production of Jamaica Inn is a dour affair, mistaking moody atmosphere for drama – everything is dark and dull, muddy and boggy – and it’s a tediously slow retelling of the tale over three long hours. Jessica Brown Findlay does well as Yellen, sullen but steely, always bedraggled and firmly casting off the ghost of Lady Sybil, her Downton Abbey character.

She and Joanne Whalley, as Aunt Patience, are the most convincing characters – and at least you can hear them. There has been much criticism of the sound levels in Jamaica Inn , and certainly Sean Harris, as the pivotal character of Uncle Joss, fails to deliver many key plot details through his unintelligible style of delivery. The same goes for his scruffy band of muttering smugglers. I don’t think it’s mainly a technical issue; I blame the cult series The Wire , which started this vogue for actors mumbling, mostly to indicate a sort of vicious intensity. But what was faintly thrilling on the streets of Baltimore is simply frustrating in Jamaica Inn .

This is what I remember about Fargo, Joel and Ethan Coen’s 1996 movie: Frances McDormand as the pregnant police officer with her chipper “alrightys” and “you betchas”; the deeply weird atmosphere in the snowy Minnesota town; Steve Buscemi’s grisly end in the woodchipper; and William H Macy’s loser protagonist – a good guy who turns bad. All great, unsettling fun, but why make a homage to it when there’s no evidence, on the strength of the first episode, that there’s enough Fargo -inspired plot and character to stretch to 10 hours of television?

This Fargo (Channel 4, Sunday), made for the US cable channel FX with the Coens as executive producers, has the same weird atmosphere – and that’s the best thing about it. The loser character is bewildered, downtrodden Lester (Martin Freeman, here like his character in The Office but with a Minnesota accent and a down-filled jacket). In the first hour he goes from mild-mannered insurance salesman to the sort of man who kills his wife and hires a hitman. In the movie that absurd character transition has to happen sharpish, but here, with 10 hours to play with, there’s time. The assumption seems to be, however, that, no matter how arty the look, viewers will switch off if the drama doesn’t deliver a high and bloody body count, and soon.

Then there’s the nasty, explicit porny scene with a naked prostitute – for no crucial plot reason except that random naked female characters seem obligatory now in glossy drama series. The hitman, the devilish Lorne Malvo (Billy Bob Thornton), is this Fargo ’s real protagonist. Maybe he will propel the series along, but he isn’t from the original movie, and he’s closer to Javier Bardem’s killer in another Coen movie, No Country for Old Men. Fargo is shaping up to be one long ode to its own good-looking self, revelling in its carefully crafted weird atmosphere and superior cinematic style but otherwise being quite ordinary – a bit like the bitterly disappointing True Detective . Heck, 10 hours of your life is too much to give to this Fargo , not alrighty.