Opinion: After the Angelus is broadcast on RTÉ, should we now have an Atheist Minute? 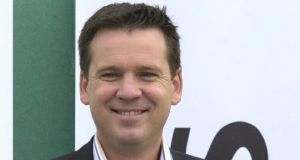 ‘On Derek Mooney’s radio programme on RTÉ Radio 1 in January, a chat took place between Mooney, who happens to be gay, Tiernan Brady of the Gay and Lesbian Equality Network, and RTÉ broadcaster Michael Murphy.’ Photograph: Cyril Byrne

When a straight couple is on the radio talking about their relationship, what goes through your head? Maybe they’ve phoned in with a quirky story to Ray D’Arcy who wants to share it with his listeners. Maybe they’re a husband and wife on Miriam Meets, talking about how they’ve supported each other’s careers. Maybe they’re a celebrity couple in Ryan Tubridy’s 2fm studio, waffling about their upcoming wedding in some castle or other. Whatever the context, it’s generally nice. Love is nice, isn’t it?

Now, let’s just suppose that couple is a same-sex couple. Stop right there, (civil) partner! There’s a new sheriff in town, and his name is Balance. Round these parts, folks, we don’t like your sort, no siree. Balance is boss, and it’s pistols at dawn for anyone who thinks otherwise.

On Derek Mooney’s radio programme on RTÉ Radio 1 in January, a chat took place between Mooney, who happens to be gay, Tiernan Brady of the Gay and Lesbian Equality Network, and RTÉ broadcaster Michael Murphy. During the programme, statements in support of marriage equality were made.

The BAI received a complaint about the programme from an organisation called the Family and Media Association, which has captioned a photo of a coiffured poodle on its website as “BAI – not so much a watchdog?” and has a mission statement that states its objective is “to promote greater understanding and appreciation of Christian values in the media with particular reference to Catholic teachings”. The BAI upheld the complaint, saying the programme “included the presenter making a statement in respect of changes in Irish law in respect of same-sex marriage that entailed the articulation of a partisan position on a matter of current affairs.”

RTÉ defended the programme saying: “It does not automatically follow that every examination of this area should turn into a debate about the rights and wrongs or otherwise of homosexuality and gay marriage.” In upholding the complaint, the BAI said while aspects of the programme were factual and of a human interest nature, the issue of marriage was one of current public debate and controversy. So now, as Sheriff Balance decrees, if you want to talk about relationships that gay people have, it is automatically a controversial debate, not just “life”.

Balance is the new blackout. After the Angelus is broadcast on RTÉ, should we now have an Atheist Minute? If Prime Time decides to air a report about the hardship of direct provision, will there be an anti-immigration companion report?

There are other referendums in the offing – the lowering of the voting age for example. Should young people on radio now be balanced with a guest decrying the follies of youth? When a straight person is on the radio and references their relationship, must they now be chaperoned by an anti-relationship campaigner? If a straight person talks about their children, should that be accompanied by an opinion that heterosexuals shouldn’t have kids? Of course not. All of those examples of so-called balance are ridiculous.

But, you see, this isn’t actually about balance. “Balance” – and not the 50/50 broadcast time required during an actual referendum campaign – in this case is a cover. This is about not having gay stuff on the radio. Gay people’s lives have always been political. The very idea of coming out in a society that discriminates against gay people is a political act, whether you like it or not. But imagine if your relationship was now “a hot potato”.

In some ways it’s like being a reluctant celebrity. Everyone wants to talk about you, debate you, dissect your virtues, wonder whether you’re responsible, discuss your ability to raise children, assess your economic prowess and think about your sex life, while you just want to pick up the kids, make the dinner and watch Coronation Street. But you can’t. Because you, gay man or gay woman, are public property. You might think that talking about your life is just sharing your lived experience and reality, but no, it’s controversy. You can’t just exist, you need to be balanced.

With more than 70 per cent of Irish people in favour of marriage equality, those on the opposing side are well aware they are on the back foot. But they also know how powerful the stories of individual gay people are. How much easier would it be for anti-equality campaigners if the public wasn’t given access to those stories? Gay people know all about being silenced and marginalised, but the gay rights movement has been built on visibility – individual acts of honesty met with resistance or compassion.

While the Irish legislature has dragged its heels on equality for LGBT people in the workplace and at the registry office, all across the country in offices and on football pitches, in family homes and factories, gay people have come out and been supported by their straight friends, colleagues, families and team-mates. Real balance is actually about all citizens having the same rights as each other. When you know you can’t win a debate, the last chance saloon tactic is to try to shut it down.

Cuties controversy: If you haven’t seen it, you don’t know what you’re talking about
8