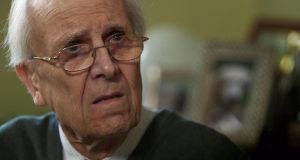 Politicians have underestimated it, artists have been beguiled by it, A-listers charmed and D-listers flattered. But after years of luring unsuspecting guests to full disclosure and teary revelation, the siren song of Miriam O’Callaghan may finally have met its match. On Sunday With Miriam (RTÉ Radio 1) O’Callaghan meets the one person possibly capable of withstanding her relentless assails of empathy: Norman Tebbit, the British Conservative minister who was Margaret Thatcher’s loyal ally and fierce enforcer.

He was also the most prominent victim of the IRA’s 1984 bombing of the Conservative conference at the Grand Hotel in Brighton, an attack that killed five people and paralysed his wife, Margaret. It is this incident that brings the former minister on to the show, in response to O’Callaghan’s interview earlier this year with Patrick Magee, the man who planted the bomb. But where the first encounter showcased O’Callaghan in full healing mode – Magee appeared with the daughter of one of those he had killed – the Tebbit interview is a more unyielding affair. But it’s also strangely compelling.

Tebbit doesn’t conceal his hostility towards the people who left his wife in a wheelchair. Having lived through the Blitz, he says he had “been bombed before by a better class of person”, before contemptuously characterising Magee as “the monkey, not the organ grinder”. He reiterates his dislike for Gerry Adams and Martin McGuinness, whom he views as the men who plotted the deaths of his friends.

As she attempts to draw some reconciliatory moments from such an implacable guest, O’Callaghan deploys her full arsenal of soothing tones and emollient phrases, not to mention clips of Magee saying he regretted the loss of life – but Tebbit will not accept the suggestion that Magee is sorry. “He never sought to ask my wife to accept his apologies, so I don’t take him seriously.”

Tebbit’s attitude is understandable but uncomfortable. Still, it’s almost refreshing to hear someone so deeply unreceptive to the contemporary instinct for closure.

His unrepentant views on the North seem less edifying, if not plain wrong. He concedes that things are better since the peace process but suggests that the IRA would have been defeated militarily had his friend and colleague Airey Neave not been murdered by the INLA before he could become Northern Ireland’s secretary of state.

But O’Callaghan’s open-ended approach also allows glimpses of the person beneath the steely exterior and apparently unfeeling monotone. His political certainty is not matched by religious conviction: he “keeps his fingers crossed” during church services. There are flashes of drily laconic wit, although not everyone may appreciate it. And as he talks about his wife having other health problems now, noting that “we’re not alone in this”, there is even the faintest quaver in Tebbit’s voice. It takes more than a Tory terminator to stop the Miriam juggernaut.

There are times during Bishop Kevin Doran’s appearance on Breakfast (Newstalk, weekdays) when Tebbit can seem like a lily-livered compromiser in comparison, so unwavering is the cleric’s opposition to the same-sex-marriage referendum. Interviewed by Chris Donoghue, the bishop eschews fire-and-brimstone tactics, assuring listeners of the church’s belief in equality for gay people – when people are in church, he says, “sexual orientation is not relevant” – but still sounds breathtakingly arrogant.

Asked at the off if he believes in marriage equality, Bishop Doran says that, just as people can’t marry their sister or brother, he thinks people of the same sex can’t wed, a statement that brings out a quietly withering rejoinder from Donoghue: “We are not being asked about marrying our mothers or sisters.”

As for whether people are born gay, the bishop says the jury is out. He concedes that some “perhaps have a predispostion genetically to being gay” but adds that others may be drawn into gay relationships because of “context” and “circumstances”. “Many people are confused about their sexuality,” he says. “I have to say I was myself.”

It’s an admirably candid admission, but the bishop’s early doubts have not softened his opinion that same-sex marriage undermines not just matrimony but also parenting.

Donoghue’s terrier-like questioning is interrupted by his cohost, Ivan Yates, who plays the card of world-weary experience with aplomb. “I just don’t get how if gay marriage is legalised it undermines my marriage,” he says. The bishop replies, “It may not feel as if it impacts on you – I don’t know – but it does change the meaning of marriage.”

Yates doesn’t press the issue any further, perhaps because the absurdity of the situation seems plain. (Later, on The Right Hook, his Newstalk colleague George Hook is more forthright about the encounter: “This is where celibate men are at a complete loss and actually should be forbidden from speaking.”)

Even Donoghue lets up on the gas towards the end, trying to square the bishop’s compassionate personal sentiments with the church’s rigidly argued reasons for denying same-sex couples the right to marry. “The humanity is very kind, but the doctrine is very cruel.” But no concession is forthcoming. Perhaps they should have called Miriam.

Moment of the Week: Tony Fenton’s musical legacy
An air of sadness descended across the airwaves on Thursday as the news of Tony Fenton’s death emerged. An outsized personality on air, he wore his serious illness lightly and carried other travails, such as bankruptcy, with dignity. The melancholic mood was most obvious on Today FM, his home for many years, where Dermot and Dave marked his passing by eschewing their normal diet of banter with an uninterrupted soundtrack of music. It’s a fitting tribute. Fenton was a consummate pro, capable of easy patter, but his love of music could never be faked.