Paddy Power’s Pistorius advert the most complained of in UK 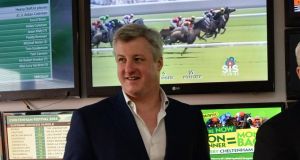 An online petition condemning an Oscar Pistorius bet contained in Paddy Power advertisements as “reprehensible” is addressed to the bookmaker’s chief executive Patrick Kennedy (above) and states: “Please consider the vast surge of public outrage against the terrible decision you have taken to offer bets upon the outcome of the Oscar Pistorius trial. Photograph: Cyril Byrne/The Irish Times

Paddy Power’s controversial Oscar Pistorius advert has become the most complained about UK advert of all time with more than 5,200 complaints so far, the British Advertising Standards Authority said today.

The ASA ordered that the ad, which offers “money back if he walks” or Pistorius is found not guilty of killing his girlfriend Reeva Steenkamp, be withdrawn with immediate effect after it received an “unprecedented number of complaints”.

An ASA spokesman said: “We consider the ad may be seriously prejudicial to the general public on the ground of the likely further serious and/or widespread offence it may cause.

“We are also concerned that the good reputation of the advertising industry may be further damaged by continued publication of this ad.”

With this development, Paddy Power takes the title of the most complained-about UK ad of all time from Kentucky Fried Chicken, whose 2005 campaign featuring call centre workers singing with their mouths full drew 1,671 complaints.

Paddy Power’s advert features a photograph of Pistorius, a double amputee Olympic racer and a Paralympic gold medallist, mocked up as an Academy Award statuette.

The ASA said it was investigating whether the ad is offensive for trivialising several issues, including the fact it is a murder trial, Ms Steenkamp’s death and Pistorius’s disability.

The spokesman said it was also looking at whether the advert brings the reputation of advertising into disrepute.

ASA chairman Lord Smith took the unusual step of directing the advertiser to withdraw the ad from circulation pending the outcome of the investigation, which is being fast tracked.

Only in exceptional circumstances do the watchdog’s procedures under the advertising code allow it to take interim action and have ads amended or withdrawn pending investigation.

The national advertising campaign featured the words: “It’s Oscar Time. Money Back If He Walks. We will refund all losing bets on the Oscar Pistorius trial if he is found not guilty.”

The ASA’s decision comes as a change.org online petition demanding that Paddy Power “remove your offensive betting on the outcome of the Oscar Pistorius trial and donate any profits so far to a women’s charity fighting violence against women” drew more than 120,000 supporters.

Protesters from around the globe who have signed the petition condemned the bet as “reprehensible” and “shameless behaviour”.

Others declared that Paddy Power had gone “too far this time” and that the “death of a woman should not be used as a publicity stunt. A new disgusting low for the UK”.

The petition is addressed to Paddy Power’s chief executive Patrick Kennedy and states: “Please consider the vast surge of public outrage against the terrible decision you have taken to offer bets upon the outcome of the Oscar Pistorius trial.

“[Reeva Steenkamp’s] death is not and should never be a source of entertainment or profit.

“I have seen your attempt to explain the decision and it is unacceptable. 138 women died in the UK last year as a result of male violence against women.

“This is not something that should be seen as ‘sport’. In order to salvage the situation it would be an act of reparation and humanity to donate any profits to relevant women’s charities working in the area of domestic violence and abuse.”

The ad coincided with the Oscar ceremony in Los Angeles and the first day of Pistorius’s trial in South Africa, where he formally pleaded not guilty to four charges including the murder of Ms Steenkamp.

Holly Dustin, director of End Violence Against Women, said of the ad: “They are making a game out of murder and the brutal killing of a young woman, which is unacceptable.

“It is not just that this is a bit sick - it also actually contributes to a culture in which violence against women is trivialised or made into a bit of a joke.

“This is a really serious problem. It is recognised as a human rights issue both here in the UK and in South Africa. It is totally unacceptable. They should withdraw the ad.”

The ASA said the ad should remain out of circulation in all UK media until the investigation has been considered by the ASA Council and its decision is published on the website www.asa.org.uk.