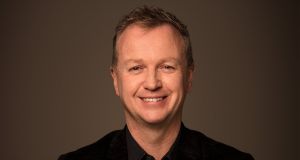 It may seem odd to say, but Matt Cooper never shies away from a fight. True, he’s better known as a level-headed host than a headstrong controversialist. For nearly 20 years Cooper has brought solidity to The Last Word (Today FM, weekdays), the drive-time news show previously hosted by the unpredictable Eamon Dunphy, and latterly he has also played the straight man to the fulminating Ivan Yates on The Tonight Show, their nightly TV slot. But despite this reliable if slightly unexciting image, Cooper has always enjoyed a good scrap, even if he doesn’t take part in it.

Certainly, a reliably compelling feature on Cooper’s show is the weekly stand-off on US politics between Marion McKeone and Cal Thomas. Every Tuesday McKeone, the Irish-born journalist, plays the liberal foil to Thomas, an American conservative commentator, with Cooper egging them on with carefully loaded questions. It’s a venerable format, more conducive to gleeful partisan point-scoring than persuasive argument. But like so much in Donald Trump’s United States, it’s becoming more bitter.

Cooper’s guests generally argue cordially; this week McKeone expresses concern for Thomas’s wellbeing in the coronavirus hotspot of Florida. But the discussion develops a bad-tempered undertow as Thomas bridles at McKeone’s berating of Trump, before accusing Joe Biden, the Democratic presidential challenger, of being a puppet of the radical left. Cooper momentarily drops his argument-enabler role to suggest Biden’s “far left” policies may be viewed in Europe as conventionally social democratic, but to no avail.

Asked if he wants the final word, Thomas replies in audibly peeved fashion – “Not really” – and abruptly ends the conversation. What was once an entertaining political jousting contest is now more a depressing reflection of the fracturing of US society.

Cooper doesn’t always play the bystander. Sometimes he displays his own fighting instincts, in low-key but unmistakable fashion. On Tuesday he interviews the British LGBT campaigner Peter Tatchell, recently at the centre of a social media row involving the new Minister for Children, Roderic O’Gorman.

The Green Party TD was attacked online for appearing in a photograph with Tatchell (at a Pride march two years ago), with the latter branded a paedophile apologist on the basis of a 1997 newspaper letter. (In the letter, Tatchell said he knew people who’d made a “conscious choice” when aged 13 and under to have sex with adults.)

Given the poisonous evil of child abuse, it’s courageous of Cooper to interview someone who has been accused of being an apologist

Cooper doesn’t discuss the letter’s troubling content, which Tatchell claims was edited. But he does allow his guest to articulate his view on paedophilia. Tatchell unambiguously and repeatedly condemns adults having sex with children. He adds that the “unfair and cowardly” attempts to smear O’Gorman, “who has never endorsed my view on anything”, amount to a “McCarthyite witch hunt”. The whole episode, Tatchell suggests, shows there can still be “a very toxic atmosphere” regarding LBGT people in public life. (O’Gorman is gay.)

On the face of things it’s an unremarkable interview. A high-profile human-rights activist – who’s previously been interviewed by the habitually jolly RTÉ presenter Derek Mooney, hardly a fringe figure – condemns paedophilia in the strongest terms. But given the poisonous evil of child abuse, it’s courageous of Cooper to interview someone who has been accused of being an apologist.

Throughout the interview Cooper is calm and serious, his questions aiming to clarify his guest’s views, asking about his controversial advocacy of decriminalisation of sex between underage children. Tatchell says such young people should wait until older before sex but shouldn’t be punished with imprisonment, while reiterating: “I have never argued for adults having sex with children.”

Cooper, in seeking to set the record straight, is alive to the fallout the interview may provoke. “Isn’t it interesting you have to qualify everything you say,” he remarks, predicting that he’ll receive texts claiming he’s trying to foist “woke” views on his audience. Tatchell, meanwhile, says he seeks a society where no one is marginalised, with “equal rights, equal respect and equal dignity”, before pointedly adding, “That does not include paedophiles.”

All in all, Cooper’s forensic examination dispels any doubt that O’Gorman was the victim of a smear. When it comes to getting the facts right, Cooper will go toe to toe with anyone.

The programme is full of fascinating detail and memorable vignettes, from glimpses of life in Cuba to unexpected family reunions

Pugilism of the literal variety features in Documentary on One: Nicolás Cruz Hernandez – Still Fighting (RTÉ Radio 1, Saturday), although the gruelling bouts chronicled in the programme are as much mental as physical. Produced by Bill Tyson and Ronan Kelly, the documentary follows Cruz Hernandez, the Cuban-born boxing coach who helped Ireland to Olympic medal success in 1992, as he revisits his homeland for the first time in six years. But this is no sunny show about joyfully returning to one’s roots. Rather, it’s a bitter-sweet portrait of a man whose personal struggles have threatened to overwhelm his accomplishments.

His feats are impressive. He arrived from Cuba in the mid-1980s at the request of the Irish Athletic Boxing Association, charged with bringing, yep, a professional approach to the then beleaguered sport. He reached his apotheosis at the 1992 Barcelona Olympics, when Irish boxers won gold and silver.

But these triumphs have been offset by setbacks, such as being recalled to Cuba and defecting back to Ireland (without his family) in the mid-1990s, only to end up without a home, living in the National Stadium in Dublin. Relationships have come and gone. Almost inevitably, as a black man, Cruz Hernandez encounters racism in his daily life. Finally, there is his depression, which he continues to live with. “I’ve been depressed for a long time,” he says.

Despite this grim backdrop, neither the documentary nor the man is totally glum. The programme is full of fascinating detail and memorable vignettes, from glimpses of life in Cuba to unexpected family reunions. For his part, Cruz Hernandez, sounding gentle, distracted and even vulnerable at times, still finds fulfilment in teaching prisoners in Portlaoise, where he has made his home.

As the documentary’s title suggests, he has never stopped battling his demons. Some people are born fighters.

Ryan Tubridy (RTÉ Radio 1, weekdays) has also been getting in on the fight theme, courtesy of his interview with lightweight boxing world champion Kellie Harrington, an all-round good egg. But inveterate letter-writer that Tubridy is (as he regularly reminds listeners), his fighting spirit is riled less by slugging contests in the ring than egregious misuse of language.

On Tuesday he chuckles ruefully as he reads out a tweet by the actor Jamie Lee Curtis, bemoaning the fact that the Merriam-Webster dictionary has just recognised “irregardless” as a word. Tubridy makes clear his feelings, which surely most reasonable people share: this is “a bad news story”. The only way it could get worse would be to say he’s literally fuming.