Megan Mullally and Nick Offerman: ‘We sing songs about our genitals’

The pair are that most shocking thing to Hollywood: a middle-aged married couple who actually fancy each other 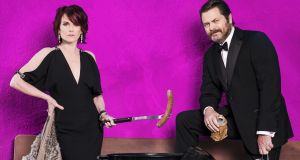 Megan Mullally and Nick Offerman’s Summer of 69: No Apostrophe is coming to Dublin

Ten years since Will & Grace ended its run, it’s still difficult to separate Megan Mullally from Karen Walker, the scene- stealing sidekick who was as iconic as she was alcoholic. Mullally’s voice isn’t shrill and her jokes aren’t catty, but speaking to her after her latest live comedy show in South Carolina, you would swear every sentence will begin with “Oh, honey . . . ”

And her husband, Nick Offerman, has a touch of the Ron Swansons about him. Like his Parks and Recreation character, he takes his time with words and shares an all-American aura, but he speaks with such sensitivity it’s apparent he would never insist crying is only “acceptable at funerals and the Grand Canyon”, unlike Ron.

“When I think about those roles, I think similarly of both our experiences,” Offerman says. “When you get on set, it’s easy to see if it’s being created out of greed or power. If it’s created with love, like our shows, the writing is often much riskier, and we were the beneficiaries of some of the best progressive writing, socially. Our shows really made a difference.

Mullally adds: “And it was also great experience: for an actor it was like winning the lottery to work every day for seven years. It’s so weird when people get famous for a certain role and they spend the rest of their career trying to distance themselves from it.”

Offerman says: “Although, because I’m a character actor I’ve had to get rid of my moustache. People get upset when I don’t have it. But I know that when they insult my face, they’re praising my acting.”

The couple’s signature roles came mid- career; both were 39 when they were cast in their respective sitcoms. Growing up in Oklahoma, Mullally intended to become a ballet dancer, but found its acting aspect so appealing she spent the next 20 years pursuing it with bit parts and stage shows until she landed the biggie. Offerman’s background was in theatre, which is where the two met.

Fast-forward through 13 years of seminal characters and blissful marriage. The latter is the subject of their variety stage show Summer of 69: No Apostrophe. As the risqué name suggests, it’s not a show for the prudish – a surprise, given that most celebrity couples pretend to hide their personal lives.

“We didn’t choose to go public,” says Offerman. “The media in the States has made a really big deal about our relationship. We were touring separately – me as a humorist and Megan with her band [Nancy and Beth] – and when we wanted to go on tour together, we figured it had already been promoted, so let’s take the piss out of that. It’s not a documentary where we give a blow-by-blow account of our behind-the-scenes life. It’s an entertaining send-up of our life together.”

The show has been running for two years, and it defies Hollywood norms by their willingness to present themselves as (shock horror) a wife and husband who actually fancy each other. This despite the entertainment industry’s insistence that middle-aged couples – and women – are asexual (a point excellently parodied in Amy Schumer’s skit Last F** *able Day with Tina Fey, Julia Louis-Dreyfus and Patricia Arquette).

“We’ve not been asked about that before, but it’s really interesting,” says Mullally. “It’s not something that we think about in real life; it doesn’t even enter into the equation. I’m 57 and Nick’s 46, and we have a romantic and sexual relationship. But there is a huge discrepancy in film and television. I have a movie coming out called Why Him? where I play Bryan Cranston’s wife. I felt it was important that we showed some kind of sexuality to my character: we need to see more couples who aren’t 23 years old have a sensual relationship. You still have the same feelings and the same desires when you’re older. It doesn’t stop. People in marriages or relationships who are older still get it on.”

The issue perhaps lies with the lazy, 2D roles written for women – which Mullally has avoided throughout her career, be it with Karen, white supremacist Leanne in Sky 1 series You, Me and the Apocalypse, or the neurotic Aunt Gayle in Bob’s Burgers.

“I was offered a lot of dumb comedies during Will & Grace, where you play the best friend or whatever,” she says. “It’s incredibly frustrating, as there aren’t as many parts for women, let alone women over 32.”

Offerman adds: “It’s something that shows its face every day in our household. I’m perfectly satisfied with my abilities, but my wife is so gorgeous and talented and hilarious, and also just a great actress. Then to be in a relationship where we can compare the opportunities that come to us – for me there’s roles as a judge, a sheriff, a coach. You also see roles where the love interest is much younger. But those types of projects with skewed mentality don’t align with our feelings, so it doesn’t come across our desk that often.

“By just being ourselves and celebrating the reality of our lives, we’re afforded this opportunity that people enjoy. We’re a happily married couple and we sing songs about our genitals.”

This leg of their tour – which has been updated with four new songs, including one about Donald Trump – comprises only London and Dublin, which they requested while work took Nick to Scotland. London holds a special place in their hearts; it’s where they were engaged and where they renewed their vows on Valentine’s Day last year. Dublin also gives them the chance to visit Co Galway and discover Mullally’s roots.

It’s a quick break between their many, many other projects: together they’re guest-starring in sitcom Life in Pieces and preparing for a new film, Infinity Baby. Mullally’s next big release is Why Him? and Offerman’s is The Founder (a biopic about McDonald’s businessman Ray Kroc) and also has a new woodwork book due in October (he has a wood shop in LA).

“We hustle,” says Offerman. “But if our job takes us away, we always make sure that we don’t spend more than two weeks apart. And since we like working together, our next goal is to develop a TV show together, maybe about our marriage. Right now we’re trying to find the right showrunner, so it’s in the early stage.”

With such an enviable relationship, we have to end by asking, what’s the secret to a happy marriage? “Being able to have a sense of humour in common helps,” says Offerman. “We can have a laugh when things get tough. It means she won’t ever be able to fully leave me.”

Megan Mullally and Nick Offerman’s Summer of 69: No Apostrophe is at the Olympia Theatre, Dublin, on September 6th

Karen Walker and Ron Swanson were memorable characters in otherwise bland shows. Here are other fan favourites that bucked the trend of their series.

Ari Gold in Entourage
A group of superficial guys enjoy the privileges of La-la land. Sharp-tongued talent agent Ari Gold (Jeremy Piven) was there to add some edge. He couldn’t save the movie adaption, mind.

Barry off Eastenders in Extras
The second series of Ricky Gervais’s plummeting show was saved by the self-deprecating comic acting of Shaun Williamson.

‘Do I really care?’ Woody Allen comes out fighting
9

The movie quiz: Who has never had a film banned in Ireland?
10