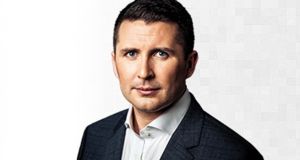 As the erstwhile anchor of Newstalk’s axed news programme Lunchtime, Jonathan Healy can be forgiven for having a blip in confidence. Even so, he needs to go easy on himself. As he stands in as guest host of The Pat Kenny Show (Newstalk, weekdays), Healy seems to have a dim view of his own abilities. “Standards have slipped since Pat went on holiday,” is his startling verdict on his own tenure.

Healy is to be commended for modesty, if not accuracy. His ostensibly damning verdict is in fact a tongue-in-cheek aside, but it’s a good example of his wryly low-key style. This approach is particularly effective in his discussion with Prof Luke O’Neill, the show’s regular science contributor who, on Wednesday, tackles the cheery subject of death.

O’Neill, whose amiable manner belies his scientific authority, initially sounds tentative about the topic, or at least its existential ramifications. “It’s a big mystery what happens after death, which we won’t go into,” he says, thus underlining his commitment to empirical evidence.

O’Neill actually does go into what happens after death, at least to the body that we leave behind. He describes how the corpse begins to decompose and explains, in detail that can only be described as forensic, how this aids the work of pathologists. Throughout this, Healy largely plays the role of wide-eyed pupil rather than interrogator, sounding the right note of wonder when his guest tells him that certain genes only get turned on when we die.

It’s a fascinating item, if occasionally icky, as when O’Neill talks about embalming. “You’re trying to clean out the orifices,” he says, before making the superfluous observation that this is “very gruesome”. It’s at this stage that Healy makes his crack about standards slipping on the show. Going by this item, he’s wrong.

There’s more doom and gloom in the air when Healy talks to author and economist David McWilliams about the banking sector. After all, McWilliams sounds like the grim reaper of Irish economics whenever he appears on radio. Like the old joke about stock markets predicting nine out of the last five recessions, he seems to constantly prophesise fiscal catastrophe and then celebrate his foresight when it actually happens.

As McWilliams outlines how Irish banks still have billions in bad debts, he sensibly avoids sensational language, preferring arid technical terms such as “ticking time bomb”. When Healy asks how worried we should be about this alarming prognosis, McWilliams reassures the audience in the manner of a soothsayer speaking down to a nervous supplicant. “The truth should never hurt you,” he says. “It should simply prepare you for eventualities you need to be aware of.”

But having primed listeners for imminent disaster, McWilliams delivers what is, by his standards, a sunny forecast. He details how bad debt holdings caused Irish banks to perform poorly in European stress tests and suggests that upheavals elsewhere could exacerbate this weakness. It’s a “wake-up call” about the damage caused by the 2008 crash, but not nearly as grim as his dramatic introduction suggests.

“Let’s make sure listeners don’t panic here; there’s no crisis in the banking system a la eight years ago,” he says, in a loftily calming tone that one might think patronising from a Central Bank governor, never mind a habitually pessimistic pundit. For all that, McWilliams cuts through the jargon to explain the workings and paradoxes of the banking world in clear, accessible language, making his airs all the more exasperating.

Informed yet informal, Healy handles the interview with a light touch, allowing his guest to expound his analysis without indulging his more apocalyptic tendencies. It’s just a shame Healy will no longer be a regular presence on Newstalk’s weekday roster come September: talk about slipping standards.

Another presenter facing change in the reshuffle is Seán Moncrieff (Newstalk, weekdays), although he is only losing an hour of airtime rather than his entire show. The programme may actually benefit from a tighter time span. Tuesday’s discussion with a Dutch designer who makes clothes from cow manure seems like padding, and is handled with cursory efficiency rather than the gleeful irreverence with which Moncrieff has previously approached such offbeat fluff.

But the presenter shows he can still jolt the listener when he talks to the BBC’s Ed Butler about a shocking practice in Malawi, which Moncrieff tastefully introduces as “the men who are paid to rape”. Butler tells of a custom in parts of the country, where men are paid to sexually “cleanse” women. Some of these women have been widowed or had an abortion; other times they are 12-year-old girls who have entered puberty. There is little choice. Local tradition holds that great misfortune will befall entire families if the women don’t have sex with these men, who go by the creepy name of “hyenas”.

It is, by any measure, barbaric, with even those involved in it aware that it’s frowned upon. If Butler seems just a touch too insouciant in his retelling, Moncrieff sounds genuinely shaken by the story. Compared with this, even discussions about death seem like fun.

MOMENT OF THE WEEK: CANON’S BROADSIDE
In light of the allegations of a gay dating culture and sexual harassment among seminarians in St Patrick’s College, Maynooth, the News at One (RTÉ Radio 1, weekdays) revisits a previous scandal there. Audrey Carville interviews Fr Gerard McGinnity, a college dean who in the early 1980s acted as a whistleblower for complaints about alleged inappropriate behaviour by college vice-president Msgr Micheál Ledwith.

Fr McGinnity recalls the end result: he lost his position, while Msgr Ledwith was promoted. (He later resigned suddenly, as other allegations surfaced.) It’s a familiar tale, but Fr McGinnity’s assessment is memorably blunt. “To put it in a nutshell,” he says, “I was shafted.”