The newspaper dominated in a number of categories including that of Columnist of the Year for which it received four of the six nominations. 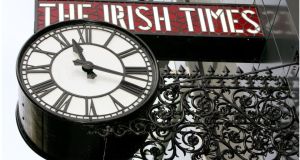 THE Irish Times has received 29 nominations for the National Newspapers of Ireland Awards for 2013, more than any other newspaper.

The newspaper dominated in a number of categories including that of Columnist of the Year for which it received four of the six nominations.

The nominees in this category include political sketch writer, Miriam Lord; Paul Howard (the man behind Ross O’Carroll-Kelly); Fintan O’Toole who is also shortlisted for the Critic of the Year award; and Laura Slattery who is also nominated for Business & Economics Journalist of the Year.

Kitty Holland, who broke the story of the death of Savita Halappanavar in November 2012, has been nominated in two categories: Newspaper Reporter of the Year and Scoop of the Year.

Crime correspondent Conor Lally was shortlisted in the Feature Writer of the Year category alongside freelance journalist Eoin Butler whose nominated articles appeared in both The Irish Times and Irish Independent.

Malachy Clerkin was nominated for Sports Columnist of the Year while Gemma Tipton was shortlisted for Critic of the Year.

Dan Griffin was nominated for Young Journalist of the Year for a series of articles on the Irish prison and youth detention system, while Kate Holmquist was shortlisted in the News Analysis category for her articles examining the proposed criminalisation of purchasers of prostitution and her coverage of the SpunOut.ie controversy.

A redesign of The Irish Times newspaper launched in November last year earned the newspaper a nomination in the Best Design & Presentation category while The Irish Times Magazine also made the shortlist in this category.

Features editor Conor Goodman received a nomination in the Campaign of the Year category for the Dublin Reinvented series while Ciara Kenny was also shortlisted for Generation Emigration, a print and online project which is a forum by and for Irish people abroad.

The After the Asylum project by graphic designer Paul Scott, chief reporter Carl O’Brien and photographer Bryan O’Brien is shortlisted in the newly introduced Digital Award category. Deirdre Falvey’s Results 2013 Helpdesk, an online real-time advice forum for Leaving Certificate students and their parents, also earned a nomination in this category.

The newspaper’s education coverage came in for three nominations in the Newspapers in Education Supplement/ Initiative category.

The winners will be announced at an awards ceremony on November 7th.