Historical dramas that linger in the memory 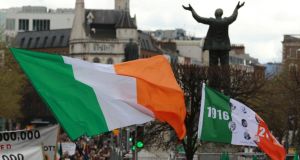 Compared with the blanket coverage given to the commemorations over Easter Weekend, the real centenary of the rebellion passes by on RTÉ with relatively little notice. Photograph: Nick Bradshaw

Ironic as it might seem, the Easter Rising shares one characteristic with Queen Elizabeth: both have two birthdays, an actual one and an official version. When it comes to marking 1916 the emphasis has been on the latter. Compared with the blanket coverage given to the commemorations over Easter Weekend, the real centenary of the rebellion passes by on RTÉ with relatively little notice.

Still, the few radio instances that refer to the Rising on Sunday are noteworthy, such as the commentary on the GAA’s postmatch 1916 celebrations at Croke Park, on Sunday Sport (RTÉ Radio 1). With his discussion about the Dublin-Kerry clash increasingly drowned out by the swirling soundtrack blaring over the PA system, Darren Frehill gamely attempts to describe the pageantry on the pitch.

Frehill is a seasoned sportscaster, but his ability to fill in airtime is tested to the limit on this occasion. Listeners learn little about the celebrations – references to “magnificent colour” crop up frequently – and much about the admiration that Frehill and his guests feel about the GAA and its event. It’s a captivating item, if only as a real-life incarnation of Alan Partridge in his floundering sports-commentator guise.

A more evocative take on the Rising can be heard on Drama on One: Cowboys, Indians and Penny Hairnets (RTÉ Radio 1, Sunday). Although it ominously opens with the sound of three gunshots, Louise Lewis’s play favours elegiac allusion over gritty reconstruction. Three children, played by Lewis, Aileen Mythen and Jamie O’Neill, recall life in the Dublin tenements, from street games and nursery rhymes to the daily routines of slum living.

They are clearly harking back to the city of 100 years ago, but they never refer to specific dates. Rather, their voices exist in a timeless space, the dreamlike atmosphere underscored by the adult intonation of their childlike language. But this ambience is, perhaps inevitably, violently interrupted.

Lest anyone miss the point, a coda contains brief sketches of children killed in the Rising. It’s an understandable ending, placing names on long forgotten victims. But with Joe Duffy having already undertaken this necessary task on air and in print, it seems an unnecessary and somewhat didactic epilogue, clunky in comparison with the hypnotic and heartbreaking reverie that comes before. This is a quibble. In giving voice to these tragic ghosts of the past Lewis has produced a memorable contribution to the 1916 centenary, whatever the date.

Recollections of the contemporaneous Great War are brought to life in Letters from the Front (BBC Radio Ulster, weekdays), which re-creates the real-life romance between an Irish woman and an English soldier during the first World War. Although Eric Appleby fell for Phyllis Kelly when he met her while training as an officer in Mullingar in 1914, their relationship was largely epistolary in nature, as the young Englishman was shipped off to the trenches soon after.

Working from a cache of correspondence found in the Linen Hall Library, in Belfast, the writer Jean Kelly and the actors Ruairí Tohill and Róisín Gallagher tell the story of the couple’s burgeoning romance in a way that is long form yet bite sized, with daily five-minute episodes running over the next five months or so. Even in these early stages it is shaping up to be a remarkable project.

Appleby’s letters, as read by Tohill and Gallagher, mix feelings of longing and jealousy with matter-of-fact reminders of his daily proximity to death. “A bullet has just come along quite close to the hut,” he remarks before resuming his declarations of love. The innocence and fear is also captured when Appleby plaintively comments that “I could do with a hug”. Such quietly devastating moments give Letters from the Front its vitality, as does its documentary quality. Although Appleby’s letters survived the war, the unadorned readings give no hint to casual listeners about whether he did. (Beware that spoilers abound elsewhere.) Either way, it’s another lesson in how drama can flesh out the lives of people caught up in history.

The theme of personal experience paralleling the upheavals of the past also runs through The Wall in the Mind (Newstalk, Saturday), although this drama series focuses on a more recent event, the fall of the Berlin Wall. Confusingly transmitted under the Documentary on Newstalk banner, Gareth Stack’s serial follows Claire, a Dublin woman so haunted by her imprisonment by the Stasi in East Berlin in 1989, and the disappearance of her German boyfriend, that she returns to the city 25 years later to discover what happened. The more Claire learns, the murkier and more elusive the truth becomes.

There is much to enjoy in Stack’s drama, from its use of location sound recordings to create a mood of foreboding to the spirited performances of its Irish and German cast. The odd overheated moment aside, Jasmine Gleeson and Mia Gallagher anchor the drama in their respective roles as the young and old Claire.

But if there is a pleasing air of ambivalence and menace as the narrative unfolds, the plot has been stretched too thin to justify its lengthy running time. Listeners will want to tune in to hear the denouement. But as a one-off radio play it would really linger in the mind.

Moment of the Week: Armed and dangerous

The Sinn Féin TD Mary Lou McDonald giving her views on Irish Water on The Pat Kenny Show (Newstalk, weekdays) brings forth a rather alarming reaction from the host. When she rejects Kenny’s suggestion that rural people on group water schemes will resent any abolition of water charges for urban dwellers, the presenter makes his disagreement clear. “If I was living in rural Ireland,” Kenny says, “I’d bite off your arm if you gave me a good water supply and took away my sewage for a couple of hundred euros a year. I would. I’d bite your arm off.” Luckily for McDonald, Kenny lives in Dublin. Still, it’s probably as well that she’s only talking to him on the phone.