Veteran broadcaster thanks wellwishers from hospital for their support 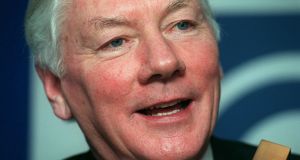 Broadcaster Gay Byrne who is reported to be recovering well in hospital after suffering a heart attack. Photograph: The Irish Times

Broadcaster Gay Byrne is said to be feeling better after suffering a heart attack earlier this week and has thanked members of the public for their support.

The former Late Late Show presenter said in a statement that he is on the road to recovery after being hospitalised on December 29th.

“I’m feeling better and on the road to recovery. Thanks to all for the well wishes,” he said.

High-profile RTÉ colleagues have expressed relief at news of the improvement in his condition, and the station said “all his friends and colleagues across RTÉ are thinking of him and wish him all the best with his recovery”.

Byrne’s Facebook page has also been inundated with supportive comments from fans following his ordeal.

Despite cutting back on his workload in recent times, Byrne continues to host a weekly show on RTÉ Lyric FM as well as the ‘Meaning of Life’ television series on RTÉ One.

He and his wife Kathleen Watkins live in Sandymount, having moved to the southside suburb from Howth following his retirement. He has two daughters, Suzy and Crona.