Five ways 2fm can get its groove back

How can Dan Healy, the new boss at 2fm, revamp a station struggling with an identity crisis and rev it out of autopilot? 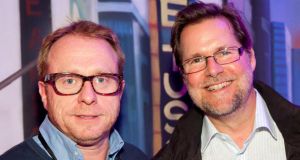 The changing of the guard at 2fm is always a good time to kick the tyres at the station. As Dan Healy takes over the big office from John McMahon, the new head of RTÉ 2fm has much on his to-do list. It’s worth remembering that this list is probably similar to the one which John Clarke had when he took the job in 1999.

It’s also much like the one McMahon inherited when he became the boss in 2009. The problems at 2fm have not changed all that much in that time. They have also not been addressed or tackled by anyone.

While the station’s spinners will inevitably reach for the JNLR figures at this juncture to posit that all is rosy in the Montrose pop garden, there are problems galore at 2fm which can’t be solved by baffling us with JNLR figures alone.

Remember that these figures are really only useful from an advertising point of view (their original function was to allow agencies to plan campaign spends) and don’t analyse the long tail of the station’s woes.

2fm is a once-mighty giant that has been overtaken in the pop radio game at every juncture by more nimble, focused and ruthless operations. Ireland’s hugely competitive radio market is often cited when the station is criticised, yet 2fm has never demonstrated the smarts or guile needed to beat that opposition, despite huge budgets and well-paid DJs.

The most pressing issue is, as has been for some time, the station’s identity crisis. What exactly is 2fm and what exactly does 2fm want to be?

Depending on the time of the day you tune in, you could hear a Liveline-light phone-in show, classic hits, new indie tunes, dance anthems or Dave Fanning.

While such an eclectic programming mix was once seen as an audience-winning proposition, there are now simply too many stations on the dial for such a scattergun approach to work. In this age of niche; macro one-size-fits-all options, which 2fm has always favoured, don’t work any more.

The station may highlight its “huge personalities”, but the content they’re working with often sounds hackneyed, uninspiring and bland. Contrast this with how the big names who’ve left the station, such as Ian Dempsey and Tony Fenton, still produce engaging, audience-friendly radio. They still sound eager and hungry and not tired and complacent like their peers back in Dublin 4.

There are probably still many who view 2fm as RTÉ’s pop station, yet it has been actively in pursuit of the 25 to 34-year-old audience for many years.

After giving up on the teens – who had given up on 2fm long before before the station realised they’d tuned out – it went after the audience who’d already happily migrated to Today FM and various regional stations.While 2fm has had some success in this regard with Hector Ó hEochagáin’s breakfast show and Rick O’Shea’s afternoon slot, the rest of the station just doesn’t appear to have the same appeal for that audience.

Here are five pieces of unasked for advice for the new 2fm boss.

New tricks for old dogs
The big guns need to be rearmed and retooled. Too many of the box-office stars like Ryan Tubridy and Colm Hayes are coasting along from day to day with little thought or effort given to new content or story ideas.

Just because everyone else does the same thing (ie ripping off ideas from Twitter or the papers) doesn’t mean you have to copy them. While Healy might not feel brave enough – or desperate enough– to can some of his DJs yet, perhaps he needs to shake up the backroom teams. Many of them would relish a new challenge after the rudderless inertia of recent years.

Better music
Healy may boast that the playlist will feature “nothing before 1990” but that’s not the real problem. Healy needs to take a much closer look at the music the station actually plays and promotes rather than go on about what they’re not playing.

2fm needs to get behind the new acts who matter to the target audience and demonstrate that the station can play an important role in building the act’s profile and growing their audience.

Of course, it also needs to choose wisely, but it has proven talent on its books who can help with this task, such as long-time producer Ian Wilson.

Fewer personalities
Or, if you wish, please forget about Gerry Ryan. Like him or loath him, the late broadcaster was the pop station’s biggest draw and his sudden death destabilised and demoralised 2fm. But a station’s real personality should be collective rather than individual and 2fm’s constant attempts to find the new Ryan has proved counter-productive.

Time to market the station rather than any one ego. It will also save cash when the time comes to renegotiate contracts with the DJs’ agents.

New blood
This one is a fine line to walk. While the idea of banishing a DJ once he (and at 2fm it’s nearly always “he”) reaches a certain age is silly. It’s also silly to keep the same names on air year in and year out.

Today FM has always showed great skill in finding, developing and finessing new talent like KC and Colm O’Sullivan, but this is an area which 2fm has never quite mastered.

Take some chances
For a music station, 2fm is far too staid and conservative. There’s little risk taking and no, Nob Nation is not risk taking. Surely it’s not beyond the bounds of possibility that 2fm might try some new wild ideas which are knocking around, let down its hair and show its audience that it still knows how to have fun? At the very least, it might boost morale.