Fake News Show: 'Was Spicer in on the joke? Who can tell anymore?' 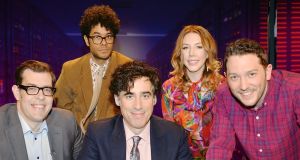 You know we’ve reached a strange point in human history when even the purveyors of “fake news” try to set the record straight.

That’s what happened recently when, faced with an avalanche of falsehoods from political campaigns, certain bleating media reports and an online pandemonium of sharing, a few comedians issued something like a clarification. The familiar brand of mocking topical humour, fronted by Jon Stewart, John Oliver, Samantha Bee and Stephen Colbert, used to merrily identify itself as “fake news”, because they recognised that the real news – infested with charlatans and vertiginous with spin – already beggared belief. Their send up was supposed to work like a satiric corrective. But in the post-truth era, everything looks like a lampoon.

Last week, when the spoof newspaper the Onion credited the White House press secretary Sean Spicer with “robust and clearly articulated misinformation”, the gentlest push from a long-standing brand of fake news still seemed to expose real idiocy. Spicer retweeted the video with an approving comment: “Nailed it,” he wrote.

Was Spicer in on the joke? Who can tell any more? When satire sees its techniques borrowed by blunt propagandists, it’s hard to sort the skewers from “alternative facts”. So it is odd to see The Fake News Show (Monday, Channel 4, 8pm), a one-off broadcast as part of Channel 4’s Fake News Week, quite sincerely attempt to reassert some kind of balance.

Host Stephen Mangan, who started out in the deadpan surrealist comedies of Armando Iannucci and Chris Morris, welcomes us to “the only show you can trust”. Although gentle irony is this show’s mode, peals of canned laughter for some weak introductory gags don’t suggest a ready supply of harder truths.

Instead, the panellists compete for scores measured in clicks (the show’s best jab at the media) by firstly spreading bait on Twitter to see how many supposedly serious websites and news organisations have bitten. This has the precise tone and entertainment value as a curdled April Fool’s joke, albeit with better dividends. Richard Osman, presenter of Pointless Celebrities, claims Kanye West will appear on his show and, following protest by West’s management company, is offered P Diddy instead (for real). Never mind the news – how is satire meant to compete with modern PR?

It used to be that deadpan humour kept the audience on its toes – if a punch line floats beneath your radar, you’re clearly not paying attention. But when Mangan felt it necessary to say after a drift of CNN clips fact-checking Trump, “Those are real, we haven’t made those up”, it no longer feels like a time to depend on subtlety or subversion – you have to spell things out. They may mock a Question Time audience member, a Leave voter finally swayed by the canard of EU-sanctioned straight bananas, but the programme assumes its own audience is almost as credulous. Hence that laugh track, helping to underline the intentional jokes, and the right-on applause that greets Osmon’s serious denunciation of fake news as “a real thing done by real people”.

These speak to a real frustration over news and entertainment that seem to have lost, or traded, their brackets. “In a way, I’d say that’s too narrow a brief for a comedy quiz,” Osman’s dependably dry teammate Richard Ayoade responds.