Dancing with the Stars: Dayl Cronin hits the top but now it's all-out celebrity war 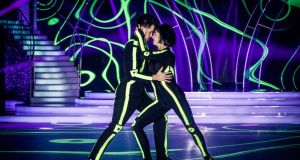 It’s Switch-Up Week this week on RTÉ’s Dancing with the Stars and as we are seven weeks in and four couples down, things might be a little bit too comfortable for our celebrities and their partners. While this switch-a-roo doesn’t bode well for all, Dayl Cronin is the first celeb to get 30 points in the competition.

Nobody is eliminated this week and, instead, their scores will be carried forward  to next week’s, when the dance-off will make it’s dreaded appearance. We're looking forward to all-out celebrity war on the dance floor.

The purpose of switch-up week is to rattle the confidence of ours stars a little bit and to see just how much they are leaning on their partners. “You give us Valentine’s Day and then you make us break up. It’s evil,” says comedian Katherine Lynch. Indeed.

Up first is Des Cahill who says sayonara to his resilient partner Karen Byrne and dances the samba with Ksenia Zsikhotska, who is usually paired with the boyband star Dayl Cronin. Life is made up of swings and roundabouts, Ksenia. Dancing to Quando, Quando, Quando by Engelbert Humperdinck, Dessie, despite a knee injury, finally proves to the judges that his nickname, Dancing Dessie, is not without substance and they give him 18 points.

Cronin’s performance with Valeria Milova allows him to play popstar for the week because he was in a boyband before, you see. The boyband was called HomeTown. They broke up in 2015. A moment of silence, please.

Dancing the salsa to Give Me Everything by Pitbull, he slips in some of those hip-hop moves he loves so much. Darren Bennett, who is again standing in for judge Julian Benson, says that Cronin brings musicality, expression and an exuberance to his dance routines.

Redmond, who has previously scolded Cronin for his sneaky, hip-hop loving ways, says that their performance is a home run. And, lo and bloody behold, he gets the first 30 marks of the series.

Red Rock actress Denise McCormack steals John Nolan away from Teresa Mannion for a hot second to perform a Viennese waltz to Major Lazer’s Powerful. McCormack and her regular partner Ryan McShane are the show’s highest scoring couple so… no pressure, Nolan.

That being said, judge Brian Redmond commends him for maintaining McCormack’s high standards and Lorraine Barry says that McCormack “never fails to deliver”, just before they dish out 26 points.

Never one for a subtle statement, Katherine Lynch dons a widow’s veil in honour of losing her partner Kai Widdrington to Aoibhín Garrihy and she dances the paso doble to Carl Orff’s O Fortuna with Vitali Kozmin and it’s full drama.

Redmond loves the aggression she brought to this Spanish dance and Barry agrees, saying that she is a gothic goddess, and they walk away with 21 points.

Garrihy faces the difficult task of performing under Lynch’s playful withering stare, as she foxtrots with Widdrington to Big Bad Handsome Man by Imelda May. While Bennett nitpicks and describes their routine as “almost perfect”, Redmond and Barry are united in their praise and throw out words like ‘immaculate!’, ‘pure!’ and ‘organic!’ before they throw out a total of 28 points.

In rehearsal footage, Teresa Mannion’s nerves are laid bare and her usual partner John Nolan begs that whoever she is paired up with treats her kindly. She has McCormack’s partner Ryan McShane and as they dance a 1950s-style jive to Tutti Frutti by Little Richard, this nervy disposition is non-existent. It feels as if the challenge of a new partner has given Mannion a new energy and she gets 18 points, her highest score so far.

While Aidan O’Mahony is the celebrity, this week, his partner Karen Byrne is the star. The Dublin dancer normally choreographs routines for Des Cahill, who wouldn’t be light of foot, so this week we get to see what she is really capable of and she is a powerhouse.

Dancing the samba to Mas Que Nada by Sergio Mendes, this should have been O’Mahony’s opportunity to shine but his performance fell flat for all of the judges and he gets 15 points, the lowest score of the night.

As the number of contestants decreases, the show has more time to fill so instead of learning more about the weaknesses and strengths that Switch Up Week revealed, we are treated to the first of DWTS guest acts; The cast from Sunny Afternoon, a musical about The Kinks, and it’s the first time in the season that we’ve felt the time lag.

However, onwards and upwards. We are just over the halfway mark of the season and this week’s shake up should cause all of our couple to shape up because they know that if they don’t, the voters at home will ship them out.